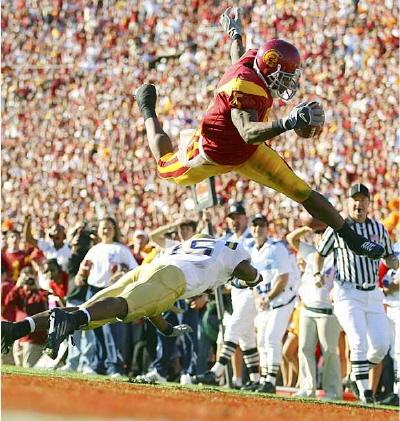 Share TEXANS MAKE IT OFFICIAL Share TEXANS MAKE IT OFFICIAL Share TEXANS MAKE IT OFFICIAL Share TEXANS MAKE IT OFFICIAL
Print this article
So the Texans shock the world by choosing  Mario Williams over Reggie Bush.  When I heard the news, it reminded me of the night that Buster Douglas knocked out Mike Tyson.  Like the reflex action of your knee when struck with that rubber instrument, I blurted an Eddie Murphy-like exclamation.
The good folks in Texas can’t be happy.  If Reggie Bush wasn’t going to be their man it better be Vince Young — or so they thought.  Instead, they get a beast of a defensive end – at least at the college level where he shared d-line responsibilities with two other probably first day picks, Manny Lawson and John McCargo.
Word from Texas is that Texans owner Bob McNair believes that it’s important to have the No. 1 pick signed before the draft.  C’mon Bob, are you kidding me?  Holdouts and prolonged contract negotiations are a way of life after any NFL draft.
What if Bush ends up in Tennessee?  He’ll face the Texans twice annually.  Might Texans’ fans have it rubbed in their face over and over much like Barry Sanders did to Packers’ fans after Green Bay made the brilliant move of selecting Tony Mandarich over Sanders in the 1989 NFL Draft?
How might this affect the Ravens?  If the Saints do not select Bush or they can’t find a trading partner and then proceed to take D’Brickashaw Ferguson, what then?  Bush will fall to the Titans and if the Titans take Bush, might Steve McNair then stay in Nashville?
Uh-oh!
Happy Birthday to you!  Today one of the most discussed draft prospects will not only become a millionaire, he’ll also be celebrating his 23rd birthday.  Jay Cutler will blow out one more candle today and the Ravens hope that he’s still on the board at No. 13 so that they can celebrate a bit themselves.  The Jets as reported could be a trading partner but that possibility could be impacted by the Jets’ interest in Reggie Bush.  Should the Jets trade up to get Bush, chances are that the No. 29 pick and/or the No. 35 pick that the Jets now own could be included in a deal to jump from No. 4 to No. 2.  That would remove the Jets as a partner.
One player that was once projected to go to the Ravens has taken a big tumble.  LenDale White had very poor workouts for NFL scouts and now there’s word that he has tested positive during an NFL administered drug test.  White addressed questions and told reporters, "(The NFL) ain’t worried about it.  The issue’s been addressed."
Yes, I’m sure it has and it will certainly affect your new address LenDale.  He’s now a long shot to go in the first round and could tumble well into Round 2 or further as NFL GM’s are reminded of Ricky “Who Got The Hooch” Williams.
“In my opinion, Vince Young and Mario Williams are the best two players in the draft.  No disrespect to Charlie (Frye), but I would take Vince Young and then make the quarterback position as competitive a position as there is.”  That’s former Raven Gary Baxter pretending to be Mel Kiper, Jr.  Hey Gary, you’ve now taken a shot (albeit subtle) at your QB by commenting on a player the Browns have absolutely no chance of selecting at No. 12.  Nice job!