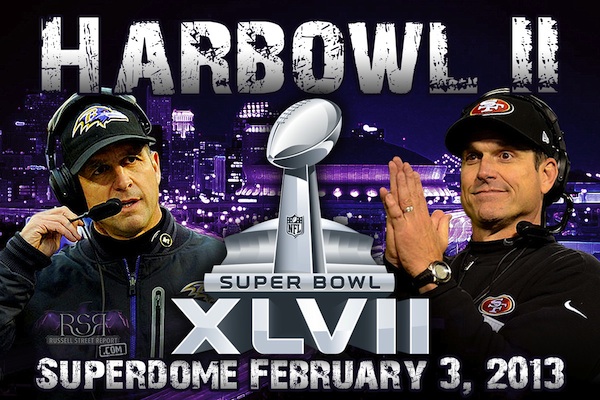 The Battle of Bays.

Call Super Bowl XLVII what you will but one thing is certain. It will be a match-up of evenly matched teams, similar on many levels except at the game’s most important position – quarterback.

Baltimore Ravens quarterback Joe Flacco is a classic drop back passer while Colin Kaepernick is a new breed of quarterback whose legs present a bigger concern than even his capable laser-like arm.

Kaepernick is the sexier pick. He’s the new breed and the flavor of the 2012 NFL Season and that could certainly sway Super Bowl 47 Betting preferences on Sunday.

But it won’t affect me. Not only will the Ravens cover the current 3 ½ point line, they will beat the 49ers straight up, 30-17.

FACT: Speaking of betting, it is estimated that the net amount of money wagered worldwide on a Super Bowl game is over $8.2 billion.

FACT: The Super Bowl is measured in Roman numerals because a football season runs over two calendar years. This is supposed to help us keep track.

MY TAKE: I think I’d do just fine this year with “47”. See how easy it worked above?

FACT: Over 700,000 footballs are produced every year for use during the NFL season? 72 of those balls are used for the Super Bowl.

MY TAKE: Talk about overkill. That averages out to 21,875 balls per team and 413 balls per player on a 53-man roster. Seriously?

FACT: It’s estimated that over 700,000 U.S. employees won’t show up for work the Monday morning after the Super Bowl.

MY TAKE: Win or lose on Sunday, do any true Ravens fans really expect to get anything done on Monday?

MY TAKE: Ok, so suppose Joe Flacco, new spokesperson for Gummy Bears, is on the sideline munching on a few. Camera zooms in, announcers make a big deal about how relaxed Joe is while popping a few of those bears. Effective “ad” right? Hey Joe, that’s worth $2 million easy!

FACT: Fans eat over 1.23 billion chicken wings on Super Bowl Sunday which adds up to more than 100 million pounds of chicken.

MY TAKE: I’m thinking about all those trucks I’ve seen on the Eastern Shore loaded with live cluckers. Considering the average chicken weighs 6 pounds, that equates to 16.67 million chickens. Wow, that cow sure does get his way.

FACT: In the last 20 years 17 Super Bowls have been won by the team that resides in the city with the lower unemployment rate. Baltimore’s unemployment rate is 7.2%. San Francisco’s is 8.2%.

FACT: Only four teams (the Browns, Lions, Jaguars, and Texans) have never appeared in a Super Bowl.

MY TAKE: This fact will look the same way a year from now.

MY TAKE: Who said they wished the Ravens were wearing purple on Sunday?

MY TAKE: On Sunday Joe Flacco will be the next.

FACT: 3.8 million pounds of popcorn are consumed during the Super Bowl.

MY TAKE: Thank God for microwaves!

MY TAKE: That’s 1.24 billion bottles of beer. That’s a lot of singing if you are on a bus trip. I wonder how many hours in the rest room that equates to?

FACT: Papa John’s prepared for last year’s Super Bowl by stocking its shops with a total of 2,000,000 pounds of cheese and 350,000 pounds of pepperoni.

MY TAKE: Whatever happened to the little dude who used to run around say, “Pizza, pizza!”