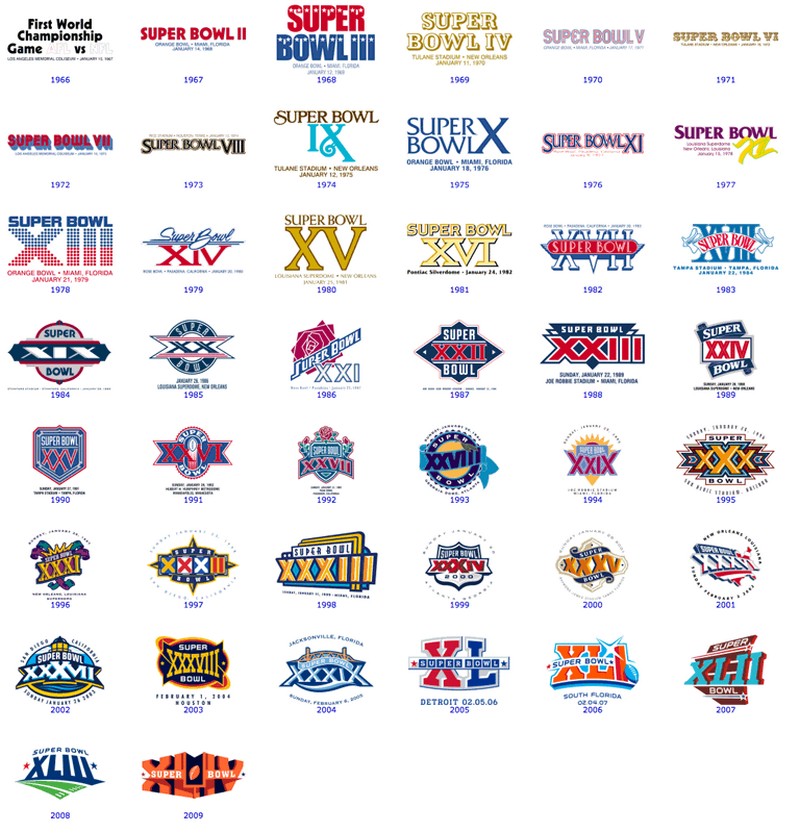 With a nickname like “Goob,” I’m humble enough to admit that I started to get lost in math when my educators started talking about the alphabet in mathematical equations. I was instantaneously turned off from algebra because I thought, “When am I ever going to need this in life?” For the most part, I was right.

However, one of the greatest things about football – especially when I was young and had no “home” team – was seeing the new designs for the upcoming Super Bowl and how they would take the Roman numerals and build them into a interesting design full of color and character. They were captivating, and embraced the city or theme for that year’s Super Bowl.

For years, the NFL has been labeled the “No Fun League” under commissioner Roger Goodell’s leadership, and apparently the fun has been sucked from primary Super Bowl logos as well.

Check out these captivating (and evolving) designs since 2010:

Other logos do exist for this week’s Super Bowl but the NFL has decided against using them as the primary logo to be featured on the patches of game jerseys and sideline merchandise.

Here are a few designs used in New Orleans:

Neither of the designs above are Top 10 worthy Super Bowl logos, but they’re still something different than the bland designs being used today.

Another issue has been with changing up the legendary Larmar Hunt (AFC) and George Halas (NFC) trophies. Previously, the designs mimicked each other aside from the conference logo and the trophy had a historic feel to it. These trophies were not only huge, but heavy.

At the same time the NFL decided to go with a more standardized Super Bowl logo, they did the same with the conference championship trophies, which now resemble paperweights.

The one thing I do agree with is the standardization of Wild Card and Divisional playoff logos along with the Pro Bowl. They aren’t sexy by any means, but they get the job done.

I realize the game is changing and the NFL probably has their reasons but from a marketing standpoint, the NFL will come out as losers on this. Even ESPN’s money man, Darren Rovell, agrees.

In Baltimore, we’ll be happy with a Super Bowl win no matter what the logo may be. However, on merchandise sold after the Ravens win in Super Bowl XXXV, it’ll look weird next to this season’s logo.

I don’t consider myself a staunch traditionalist, but I find myself unable to comprehend why the NFL went with standardized logos for their biggest games instead of individual as they had done in the past.

Here are a few examples:

What do you think Old or new?