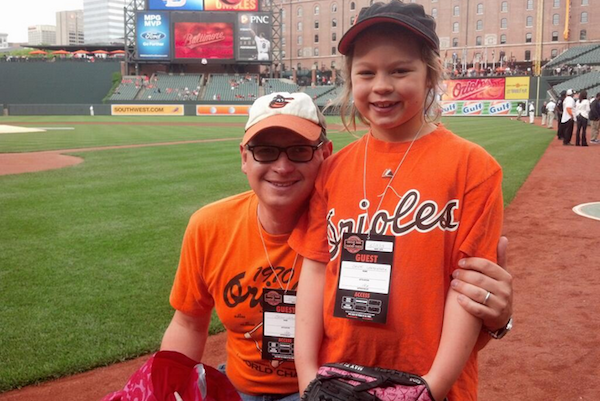 You know him as the former insider for NFL Network and now as the scoop master for CBS Sports. But prior to his rise to the national stage, native Baltimorean Jason La Canfora covered the Washington Redskins for six seasons while at the Washington Post and previously he was an octopus sweeper, I mean beat writer for the Detroit Red Wings.

Jason was gracious to share with us his thoughts on a few NFL and Ravens related topics while wearing his often seen Orioles cap.

TL: The NFL starts its season in Denver on Thursday September 5 because of a conflict in scheduling with the Orioles. It’s the first time the Super Bowl Champ isn’t the host of the opening game in forever. If you were Roger Goodell how would you have resolved this?

JL: I’m not sure what more could have been done here. The NFL and the Ravens tried every means to make this work, but without the eventual full cooperation of Bud Selig, Peter Angelos and the MLBPA this wasn’t going to be resolved. The issues with moving a game time up, the fact the teams were traveling in, and the nature of the CBA between baseball and its union left the NFL with few options, really, in this case.

They came up with proposals and were willing to spend heavily to make this happen, but it was always stacked against them.

TL: Recently Aaron Hernandez became at least loosely connected to a police investigation stemming from the death of Odin Lloyd. The details, albeit sketchy at the moment, remind many of the Ray Lewis investigation in Atlanta back in January of 2000. If Ray’s plea to obstruction of justice were to take place today what might his penalty be from the league?

JL: Until we have more official word from the police, this isn’t really anything to comment on. It’s an ongoing investigation, and the level of involvement, and/or any possible criminal wrongdoing by Hernandez is unclear. As for Ray Lewis, I’m not sure it would have played out differently, as while Goodell has certainly been more stringent with his rulings, generally the league always waits for the legal process to play out fully before handing out discipline.

TL: Coincidentally the Patriots took two tight ends just before the Ravens during the 2010 NFL Draft, Hernandez being one and Rob Gronkowski the other. The Ravens were not interested in either due to character red flags with Hernandez and medical concerns surrounding Gronk. Ed Dickson and Dennis Pitta aren’t looking like bad choices right about now.

JL: No doubt the issues that caused Hernandez and Gronkowski to slide seem to be manifesting themselves. I expect Gronk to start the season on PUP and his return simply is up in the air now and if Hernandez is connected to a murder that obviously could have major ramifications on his career. Losing them both would cripple the Pats offense.

TL: The Ravens have been criticized for letting Anquan Boldin go. Your thoughts on that and what veteran receiver if any, might become surprisingly available that Ozzie Newsome might pounce on?

JL: I totally get letting Boldin go. You have to always look forward, not back, and can Boldin maintain that playoff form over 20 weeks (if you include a long playoff run) and is he worth that price tag? You can’t get too sentimental and he tended to fade in and out of the offense during the regular season.

I don’t sense any panic or need to add a vet at this point. Pitta will be huge in the slot and there are young guys, and younger vets like Reed, the team wants to get a good look at. Brandon Lloyd would be one name, but his attitude and character issues I believe will prevent the Ravens from adding him to a young mix at receiver.

TL: Talk if you could about the Ravens reputation in league circles as a place to work for players, coaches and front office personnel.

JL: They are first-class from the owner on down. People want to work for them and players want to play for them. They are an elite franchise in every sense of the word in any way you want to evaluate it.

TL: Do you think the NFL will ever play a Super Bowl outside of the Continental USA?

JL: I do expect that to take place, particularly if New York goes off well and especially if the movement to get a franchise to London continues to gain as much momentum as it has. And I’d be very surprised if the move to London doesn’t keep gaining steam.

TL: Why such interest in Europe when NFL Europe was such a failure?

JL: Apples and oranges. You’re talking about the best sports product in the world at the highest level vs. glorified practice squad scrimmages. The game has grown there, it’s the perfect TV sport and these owners see gobs of green across the pond. Follow the money. That’s what they do and they seem committed to a team there.

TL: The stadium experience is becoming more and more expensive and less and less convenient given stadium security requirements. Meanwhile viewing from home is far less expensive and you see so much more of the game in a visually stimulating way given the advancement in technology. Is the league concerned at all about a future falloff in attendance? Do you think it’s possible that games in the future could be pay-per-view events?

JL: This is a primary concern, the in-game experience is a huge part of every owner’s meeting and its why you’re seeing the move to better Wi-Fi in stadiums, making people able to access fantasy stats at stadiums, why they are adding the ability to watch locker room speeches in stadium, etc.

The league is worried that all the innovations with how we watch games at homes is out weighing what you get by spending all that money by being there. Goodell is especially focused on committee groups of owners and league officials charged with coming up with new ideas and ways to incentivize fans to come out to games. I expect more channels in years to come where you can hear inside a helmet, or follow just your own fantasy team with constant highlights of your team and the one you are playing, stuff like that

TL: You’ve gone from a stint at the Washington Post to NFLN to CBS Sports. Talk about that migration and what you would suggest to students who aspire to travel a similar journey…

JL: I have been very blessed to work for, and alongside, tremendously talented people. I would just stress the need to get internships, make yourself constantly available to work and help, show up in the press box even when you don’t have to and treat the ability to run a few quotes like its the greatest assignment of your life. Read, read, read and write, write, write. There is no substitute for writing, particularly on deadline. You have to do it everyday. Watch a game at home, try writing a story within 10 minutes of it ending, grabbing quotes off the post-game show and trying to see how your story matches up to the one on the paper/internet.

TL: Share if you could a funny story about your colleagues at NFLN and at CBS…

JL: Tremendous people at both stations, had a blast with many of them and made some great friends. Hard to single anything out, but I’ll just say that no one tells a story like Coach Mooch, or Boomer Esiason.

TL: Who do you see as the AFC powerhouses (assuming there are any) and how do you see the AFCN shaking out?

JL: I think its status quo by and large. Usual suspects – Ravens, Pats, Broncos, Texans, Bengals, Colts. I could see the same 6 teams back again.

TL: What team might surprise folks this season? Disappoint?

JL: I think the Rams and Saints will make noise and the Dolphins will have spent all that money on another .500 season.

TL: Who will be playing in the cold of the Meadowlands in February?