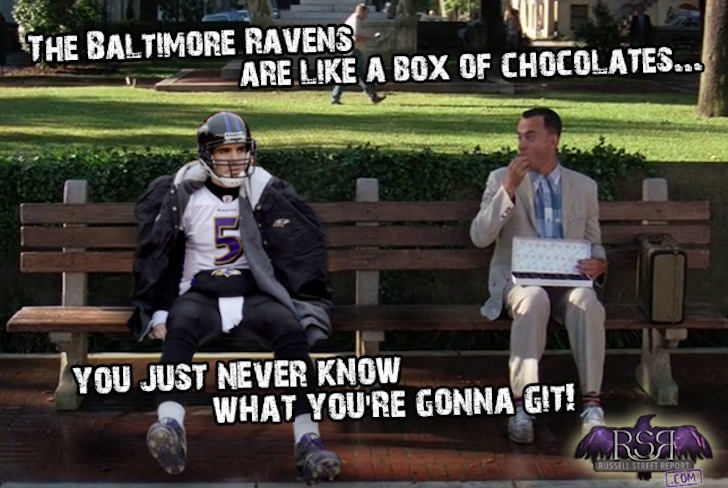 Whenever the Baltimore Ravens take the field in 2013 no one knows what to expect to see other than the worst rushing attack in the modern era of the NFL. Most of the blame can be pinpointed to the offensive line but the team’s ball carriers haven’t exactly set the world on fire.

If Ray Rice is as genuinely healthy as he claims to be, then the Ravens will be saddled with an unproductive salary cap hog for a few seasons and at this point, it makes more sense to give those 18 carries to Bernard Pierce who seems to know how to milk yards from a bad play a bit better than Rice.

Among the 28 RB’s that are ranked by Pro Football Focus for their “elusivity”, Rice is at the very bottom. He is averaging 2.5 yards per carry on 115 attempts, good for a ranking of 107 in the league. His yards per catch average (33 receptions) is 4.9 which ranks 366th in the league.

If he’s hurt, sit him. He’s obviously doing the team no good. He’s also overwhelmed at the point of attack by oncoming blitzers while in pass protection. If his name was not Ray Rice and he didn’t sign that fat contract in 2012, would he be playing as much? Would he even be on the team?

Could a combination of Bernards (Pierce and Scott) provide a little extra pop?

Could the running game be any worse?

The scary thing is that this abysmal rushing attack has a trickle down effect. It kills the passing game because there are too many second and third and long situations and it places unnecessary pressure on pass protection. Tell me you haven’t wondered how long Joe Flacco can keep his consecutive games streak alive.

The sputtering rushing attack’s collateral damage includes more three and outs (30.5% of all drives, 2nd worst in NFL), short rests for the defense, losses in the battle for field position and of course it makes it exceedingly difficult to win.

Thankfully the Ravens have improved defensively, perhaps even more so than the stats might indicate given the uphill climb the offense forces upon them. Watching the 2013 Ravens is very similar to watching the struggling offenses from the past led by Trent Dilfer and Kyle Boller. But at least those teams had a running game and they could play the field position/time of possession chess match, keep it close and pull one out with a field goal.

Only then the Ravens had the awful play of Andy Dalton and 134 yards in Bengals penalties to help them out.

What will happen the rest of the way is anyone’s guess but one thing is almost certain – with the modern era’s worst running game it won’t be easy and it certainly won’t be pretty. So expect more of the same in the weeks ahead.

Nearly everything that was good in yesterday’s game took place on the defensive side of the football. The Ravens secondary had arguably their best outing of the season. Jimmy Smith (5 tackles, 2 PD’s, 1 TFL) was stout at corner and Lardarius Webb (5 tackles, 1 INT, 6 PD’s) was extremely active and was also effective blitzing from the nickel position. James Ihedigbo also had a very good game with 9 tackles, 2 INT’s and 3 PD’s…Elvis Dumervil was a force on the edge and got the best of Andre Smith and at times Andrew Whitworth, leading to 2 1/2 sacks…Daryl Smith had his usual solid performance and came within inches of 2 interceptions while contributing 9 tackles and 2 PD’s.

Bernard Pierce showed some explosiveness and given Rice’s struggles he should be the team’s featured back going forward…Ed Dickson had a decent showing (3 catches for 28 yards including a key first down) and laid a devastating block on safety Reggie Nelson during the Tyrod Taylor reverse…Justin Tucker was 2-for-2 on FGA’s including the walk-off 46-yarder. Dean Pees called a great game mixing in an assortment of blitzes to confuse and rattle Andy Dalton.

Joe Flacco has now had very poor outings in two consecutive games and has developed a very bad knack for taking a sack to knock the Ravens out of field goal range. He has consistently thrown late and/or behind Jacoby Jones on deep posts when Jones has established scoring separation. Some of his decision making with throws was very Dalton-esque and he’s very fortunate that a couple other passes weren’t picked off. He’s been spared from the “Ugly” list only because he’s working with a handicap – the NFL’s worst running game…The Ravens talked about getting off to a fast start yet their first series on offense produced yet another 3-and-out after Dallas Clark dropped a third down pass that should have produced a new set of downs…

The conservative approach on offense in the second half is just further proof that John Harbaugh teams just don’t go for the jugular. Their failure to keep Cincinnati guessing and on their heels paved the way for the Cincinnati comeback. Was not a fan of the play calling leading up to Justin Tucker’s game winner. Given the windy conditions that kick was hardly a given and had Tucker missed the Bengals would have been about 35 yards away from a game winning attempt of their own.

Once again King Ugly goes to the offensive line. From my vantage point their biggest downfall whether it be in pass protection or when run blocking, is that too often the O-linemen double team a player while leaving another, usually a delayed blitzer, free to run unabated to either Flacco or the ball carrier. More often than not the guilty party is Gino Gradkowski. When is enough, enough with the second-year former Delaware Blue Hen? Is the once heralded Jah Reid that horrific at guard that the Ravens are afraid to move AQ Shipley to center?

THOMPSON CREEK PLAYER OF THE GAME

There were several standout performances on defense but the nod here goes to Lardarius Webb who rebounded immensely after a shaky start in Cleveland last week. Webb was often assigned to the dangerous AJ Green and kept the All Pro in check. If not for two balls with fortuitous bounces off James Ihedigbo, both leading to catches of 43 and 51 yards accounting for 94 of Green’s 151 receiving yards, Green would have been limited 57 yards. Webb’s threatening presence in blitz packages also helped others to clean up and register QB hurries and sacks.