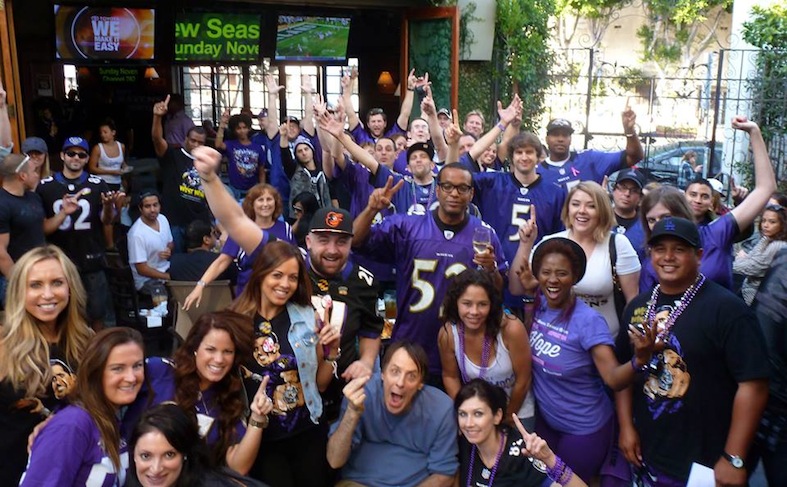 Los Angeles might as well be another world when you grew up on the East Coast.

The vibe is different, the culture is different, and (thankfully) the weather is different. Nonetheless, with a lot of effort and dedication we managed to assemble our family of Baltimore Ravens fans 2,654 miles from home.

None of us knew what was germinating in 2010 when seven of us displaced Baltimore Ravens fans met at a bar in Hollywood, CA to watch a preseason game. Most of us shared the same story. We wanted to support the Ravens and watch the games in a fun and supportive atmosphere like we used to back in Maryland.

As it turned out, there were a couple of small groups of Ravens fans already fighting for TVs and Ravens’ game sound all across the city. Knowing that there is strength in numbers, we used a mixture of grass roots marketing and social media to unite us all. When 30 people showed up for the opening game against the Jets we knew we had something.

We branded ourselves “The West Wing L.A.”.

Almost 5 years later, The West Wing has become the largest Ravens fan club outside of the mid-Atlantic region. Between our two locations we routinely host between 150 – 350 rabid Baltimore Ravens fans every game. As of last count our Facebook page numbered almost 2,500 likers.

The West Wing is first and foremost about watching, supporting, and promoting Baltimore Ravens football. But it has evolved into much more than that. The restaurants appreciate our business and give us carte blanche when it comes to the TV’s and the game audio for every Ravens game.

We hang banners and Maryland flags to help foster a real sense of community amongst us Maryland expats. Both of our locations offer a “secret” Maryland menu and Baltimore-brewed Ravens Special Lager. It’s not rare to find us sharing a care package of Berger Cookies and Crab Chips (UTZ please). Getting wild watching a Ravens win is great, but one of the most rewarding things about hosting a displaced fan group is giving people the experience of finding a like-minded community.

At The West Wing we foster that sense of community with our annual Thanksgiving food drive and our Holiday toy drive. We produce our own collectable t-shirts to support our annual events. We gather for off-season activities such as a draft-watching party, an annual Orioles vs. Angels game, and a Maryland crab feast with giveaways and a sports memorabilia auction.

Our dedication and enthusiasm has even granted us enough attention to be on the KTLA morning show twice and to be interviewed by a handful of magazines.

We have worked very hard to build The West Wing, but we have been pretty lucky to have some of the best fans in the NFL. In an effort to share the wealth, I have made it my personal mission to answer any questions from any other fans about starting or growing their groups. To date, we have mentored Displaced Raven fan groups in Florida, Houston, San Francisco, Kansas and more. If you have questions about starting a group you can find me at Super Fan Social Marketing.

Be sure to experience the West Wing online and if you are out in Los Angeles during the football season come on by, Hon!