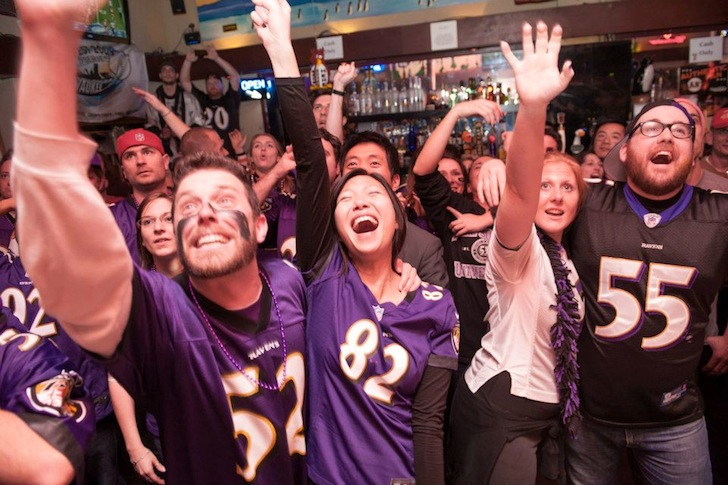 I’d never experienced anything quite like it before the 2 weeks leading up to Super Bowl XLVII. It’s funny because up until the AFC Championship game that year, San Francisco had been so welcoming. We had John, they had Jim, there were occasional chants of ‘Harbowl Harbowl!’, and really, we had no reason to be anything less than cordial.

The Ravens group in San Francisco, Ravens in the Fog, is a ragtag crew of Baltimore castaways. For 3 hours a week, we get a small slice of home. Someone always finds a way to get some crab chips, we have a drink called the McNulty – a shot of Jameson and a beer, and of course tons of purple.

Our bar, Thieves Tavern, loves us and we love them. It’s a small bar with a great bartender and a TV. It’s all we need.

And then, it happened. The miracle comeback in Denver. The smack down in Foxborough. What started as 20-30 people at the bar every week grew to over 50, then 75, then around 125 for the AFC Championship game.

We needed to find a bigger bar to fit the expected crowds for the Super Bowl.

Then, it hit us. We were now in enemy territory.

I’m not going to pretend it was as bad as wearing Ravens gear in Pittsburgh. I can only imagine that horror. But I can tell you that we were no longer welcome. It started with just a look. The ‘death glare’ as you’re walking down the street displaying Ravens pride. Then a snide remark here and there. It never got ugly, but there was a palpable something that you could feel whenever you wore purple.

We largely ignored the coming storm.

Our group had interviews on the local news. We had plans to set up at another bar with the same owner as our normal one. This bar was bigger. It would easily fit the 200+ we were expecting for the big game. The bar’s name got broadcast on the news as part of our publicity. We were beyond excited. Then Peter, our fearless leader, got a phone call from our bigger bar.

The San Francisco Police were advising our bar not to open the day of the Super Bowl as they could not guarantee our safety. That’s when it really hit home. We actually would not be safe on game day.

Just imagine what could happen after the Super Bowl to a bunch of Ravens fans whose location is wildly public.

We weren’t happy, but we did what we had to do. Our diaspora had to split a little further.

We had smaller gatherings and we kept their locations quiet. The core 15 of us found a different small bar in San Francisco whose owner graciously allowed us in. We wore neutral colored hoodies over our jerseys and made the journey to the bar.

Only once safely inside did the Ravens colors make an appearance. And then it was magic.

Joe led us to the Promised Land.

We laughed, we cried (when the lights went out), and we ate Berger Cookies.

After all the celebrating was through, on went the hoodies, and we slinked into the night.

San Francisco would never know that enemies still walked among them.