The road to the NFL is never an easy one.

Countless hours are spent training both on the field and off trying to become, bigger, faster and stronger than the rest of the competition. Each year dreams come true with the announcement of one’s name during draft day or those lucky enough to receive a phone call to come to rookie camp.

I recently had the opportunity to catch up with Ravens rookie wide receiver and Howard County, Maryland native Michael Campanaro about his journey to the NFL along with his thoughts about the upcoming season.

Brian Bower: How old were you when you first started playing the game of football?

BB: Growing up in Clarksville, Maryland, did you envision yourself ever getting the chance to play in the NFL?

MC: It was definitely a dream. I mean as a kid you always dream of it. Growing up I always wanted to first win a state championship and after that happened I wanted to focus on going to a D-1 school. After I started doing well there the NFL really started to come into reality for me. It was always a dream. I remember as a freshman in high school lifting in the basement trying to lift 225 pounds thinking, “I’m going to be in the combine one day.” So it’s always been in the back of my mind. 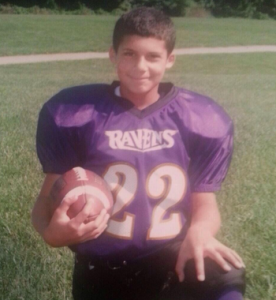 BB: Playing football at River Hill High School you were a superstar. How much do you attribute your success to the coaching staff there for putting you into position to play at Wake Forest?

MC: I would say a good amount. I would say I would give a lot of the credit to just some of the guys who I grew up with that I competed with and also my brothers and my father. They were always pushing me. I was doing a lot more than just being around River Hill. I was kind of branching out and working out with guys and going to different camps and doing everything to get better. The coaches at River Hill definitely played a big role and I had a lot of success there and they’ve got a great thing going over there.

BB: How much of a confidence builder is it for you knowing the Ravens (more importantly Eric DeCosta and Ozzie Newsome) traded a draft pick in 2015 to jump back in the seventh round to select you?

MC: I was just thankful for the opportunity. I thought I would go a little earlier on draft day but the farther I kept dropping I was just hoping that someone would call and just give me a chance. It just means a lot because of Mr. DeCosta and Ozzie Newsome and their track record of the guys they pick and how great they turn out and their eye for talent. I was just so happy to come back home and play for the Ravens, but I was just more excited to just have the opportunity to go out there and play.

BB: So far Michael, what has been the biggest transition for you from college to the NFL?

MC: I think right now it’s just learning a new playbook and new terminology and a new system. You’re just so focused on doing what you have to do and not really worrying about the defense compared to in college where you knew the offense like the back of your mind and you’re just coming out there and you’re just reading the defense and you know what to do. So right now, I’m just trying to pick up on that playbook as fast as I can so once I get out there I’m competing against guys, I’m playing fast and know what I’m doing out there.

BB: What are your early impressions of the offense by new offensive coordinator Gary Kubiak?

MC: I’ve never been in a system like his before. I feel like I’m learning everyday. Coach Kubiak is the most brilliant offensive football mind I have been around. I’m just taking it all in. There’s so many different formations and different plays and different ways he’s putting guys into position to make plays, so it’s fun to play for a coach like coach Kubiak.

BB: Through OTA’s and minicamp, what has it been like for you as a rookie to learn from Torrey Smith, Steve Smith and Jacoby Jones?

MC: It’s been great. I mean all those guys have been doing it for awhile. Torrey is just getting going but he’s a great player and a guy like Steve Smith, I mean he’s coming up on his 14th or 15th year. Everything he just says you can just take it all in. Our position coach, coach Engram he played in the league for so long. Everything coach Engram says he was a player like I am, shorter guy and he did it in the league for so many years. I’ve been learning a lot from coach Engram as well.

BB: With training camp opening in three weeks, what are you some things you are looking forward to working on?

MC: I think the biggest thing for me is just getting healthy. I got a little nicked up right when I got in. I’m feeling great, so just getting in and competing. The playbook toward the end of minicamp was really coming to me and I was playing a lot faster, so just coming into training camp with the offense down and feeling healthy so I can go out there and compete for some playing time.

BB: What role to you envision yourself playing for the Ravens in 2014?

MC: We have a lot of things we do with multiple receivers and I think I can help out a lot in the slot receiver position this year. I think we have a lot of talented guys outside that can do a lot of great things but I think myself, I’m a little different than all the receivers we have in the room. I think I can definitely come in and just work the middle and do some great things in the slot.

BB: Is there a player you model your game after or are you just trying to be the best Michael Campanaro you can be?

MC:  I’m just trying to be the best I can be. I look at a lot of different wide receivers in the league and the things they’ve done like Antonio Brown, Julian Edelman, Wes Welker and Randall Cobb. Just guys like that, that play that slot position. I just look at a lot of their tape and just see different things they are doing and how they run different routes and try to bring it into my game.

BB: What’s one talent or hobby fans would be surprised to hear you have?

While there is still a lot for Campanaro to learn about playing in the NFL, he’s certainly on the right track. The excitement in his voice rings loudly when he considers the opportunity to play for the team he grew up cheering.

So, as Michael gets set for training camp, his eyes remain on the prize, hearing his named called for his hometown Ravens in front of the same fans that cheered him in high school.

Anyone want to take him up on that bowling challenge?