No team ever wants to commit the sin of “leaving points on the field.”

In the NFL, all too often games are won or lost because of execution – or failure – to do one thing: score touchdowns when inside the opponent’s red zone.

For a team that played an NFL-high nine games that were decided by three points or less (5-4 in those games), red zone inefficiencies were glaring. The Ravens left far too many points on the field in 2013, far too often settling for field goals from close range.

The front office and coaching staff have put much attention on reassuring that the team doesn’t have a repeat performance in 2014. They’ve spent valuable time and effort on improving what was the NFL’s 31st-worst red zone offense measured by touchdown percentage (46.2).

“Overall, we probably let teams come after us a little bit too much and didn’t make the plays when they were presented to us,” recalled quarterback Joe Flacco when asked what caused the red zone inefficiency in 2013.

The Ravens offense had 52 total possessions inside their opponent’s red zone in 2013. The team scored on 45 of those 52: 24 touchdowns and 21 field goals. 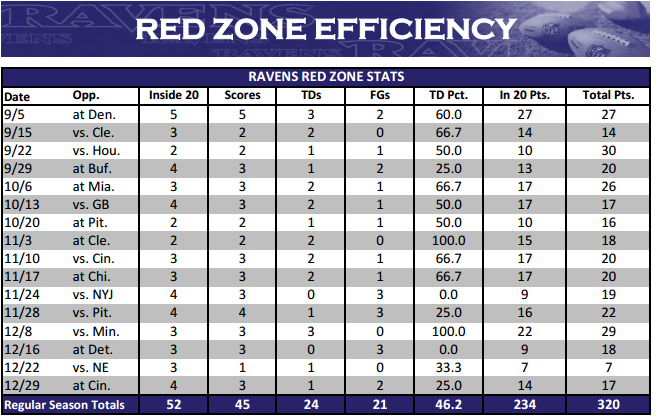 As we look to 2014, it’s all about execution. From the quarterback to the offensive line to the wide receivers and running backs, as a group they must execute.

“It better be if we’re going to win some football games,” Flacco said when asked if the offense will be improved in the red zone. “We have good players. We have a good idea of what we’re doing. We just have to go out there and execute, and we’re doing that right now. So, we can expect to go out there in a game and do the exact same.”

As far as how they go about that?

They’re counting on a revamped offense, a healthy offensive line and two healthy running backs. Throw in an emphasis on protecting the football and reducing penalties, and a recipe for success is there. Offensive coordinator Gary Kubiak pointed out all of these things on Wednesday.

“As far as the two [preseason] games we played, we did not play as well in the red zone against San Francisco; last week [at Dallas] we were 2-for-2,” Kubiak explained. “The biggest thing for me [is] I want to know we’re down there. You need to get down there – that’s the most important thing.”

“We have to run the ball well in the red zone to be effective. The biggest thing in this league – I tell the players all the time – if you have penalties in the red zone, touchdowns turn into field goals with penalties, and field goals turn into punts. So, protecting the ball, running the ball and not hurting yourself offensively is the key to being good down there.”

Saturday against Washington should be an interesting dress rehearsal of what’s to come in 2014 while providing hopefully some valuable insight as to just how far the Ravens have come in fixing their red zone woes.

Indeed it is the most important part of the field, coach – it’s one of the reasons last year’s team failed to make the postseason for the first time under your watch. Here’s to improvements.