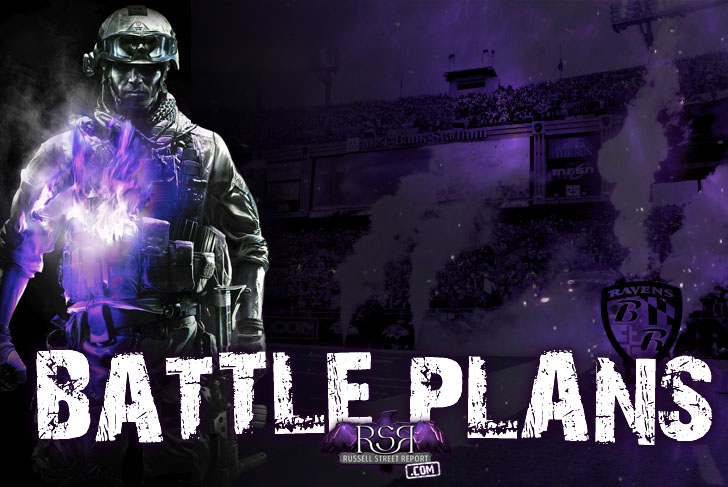 Last Sunday against the Colts, the Ravens were aggressive with their play-action passing game, especially in first down situations. The Ravens attempted 14 first down throws, and a lot of the pass attempts came in the first half.

The plan backfired, as the Colts were all over the Ravens’ boot action, causing Joe Flacco to run for his life off the play-fake.

Tampa Bay isn’t going to be as aggressive as Indianapolis in attacking the line of scrimmage. They’ll stay static in their base two-deep zone shell and wait for the action to come to them.

In order for the Ravens to get the Tampa Bay linebackers to start biting on the play-fake, they have to be able to run the ball successfully on first and second down. In fact, the Bucs aren’t always as prone to drop strong safety Mark Barron in the box on early downs, potentially giving the Ravens a lighter box to run against.

Once the Ravens are able to establish the run, the play-action passing game will open up in a big way, as the Tampa LBs have been prone to taking false steps.

This is the strike zone the Ravens need to focus on to move the ball through the air. Crossing routes, square-ins, slants, and underneath drag routes should be in full effect, giving the pass catchers the chance to methodically pierce the inside voids.

3. Get the Safeties to Chase Bait

In order for the two-deep zone coverage to work, the safeties need to play disciplined and remain true to their landmarks. They need to stay on top of the numbers, and not float too far inside or outside of their designated areas.

But safeties Mark Barron and Dashon Goldson (assuming he plays) aren’t your typical two-deep safeties. They chase the ball and look to make big plays. They could get caught cheating up to jump an inside route and leave their deep coverage responsibility behind.

Flacco should move the safeties out of position using his eyes and well-timed pump fakes. If Flacco is able to deceive Barron, Goldson or Goldson’ replacement there will be some chances to hit the deeper routes off the inside seams.

Rookie linebacker C.J. Mosley had a banner day against the Colts. He was all over the field, moving sideline-to-sideline to cover and chase plays in open space, and ended up notching 14 tackles in the process.

But it was the hit he applied on a “green dog” blitz that directly led to a Haloti Ngata interception – one of four turnovers the defense caused.

The success of a green dog blitz hinges on the execution of the blitzing backer. In this case, it was Mosley’s responsibility to read the running back. If the back stays in to block, then the backer charges downhill from a coverage position and attacks the A gap. The fact that Mosley didn’t tip off his delayed blitz action was the key to fooling Andrew Luck.

The Ravens hit on something with that delayed blitz from Mosley, and should continue to press the middle against a Tampa Bay interior that has had breakdowns in protection due to confusion and missed assignments.

With second-year quarterback Mike Glennon taking over for Josh McCown, the Tampa Bay offense has gotten a major shot in the arm (pun intended). Count receiver Vincent Jackson as one of his biggest cheerleaders. Up until Glennon took over, Jackson was a glorified decoy on pass routes. But Glennon and Jackson have a connection that goes back to last year, and the signal-caller looks for his big target early and often.

Defensive coordinator Dean Pees is going to have to shift his coverage to Jackson’s side in this contest. That means keeping a safety in dedicated deep coverage to converge on the ball along with the cornerback, and making sure that there is a crowd around Jackson whenever he catches the ball.

If someone is going to beat the Ravens, it can’t be Jackson. And if Jackson is taken out of the game, Glennon may struggle to switch gears and target someone else.

3. Don’t Fall for the Glennon Trap

While Glennon is not as dangerous as Andrew Luck in terms of his ability to move out of the pocket, he is still a guy that can keep plays alive with his feet. The lanky QB has deceptive quickness and is pretty effective throwing the ball on the run. In fact, in his two starts against the Steelers and the Saints, his movement influenced defenders out of their coverage responsibilities, and he was able to capitalize on scramble drills.

The Baltimore pass defenders need to keep their eyes on the receivers and maintain plaster coverage when Glennon starts to run. They need to force Glennon to beat them with his feet.

After getting off to a slow start in his career, McCoy is fulfilling his draft status and is currently the best three-technique DT in football. McCoy snaps off the ball and he looks to disrupt plays in the backfield. He keeps his hands active and uses the rip move to blow past the outside shoulder of the man he’s facing. This week, that man is Yanda. The Pro Bowl guard needs to keep McCoy’s hands down and stay square in his positioning to have a chance.