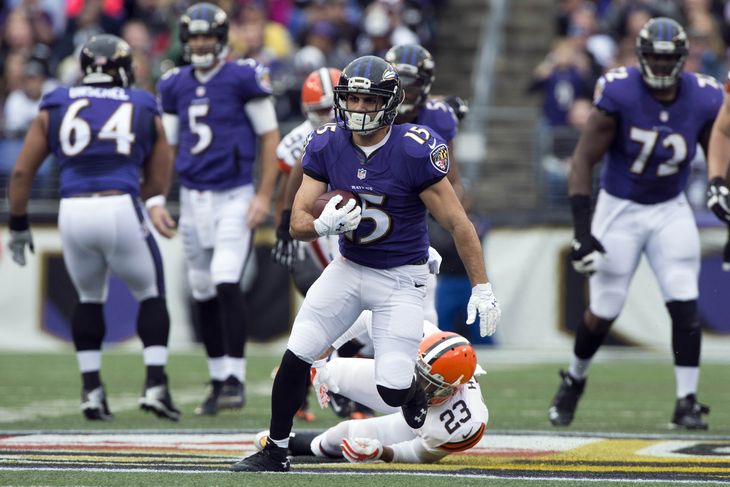 Much like the Ravens endured over the course of the 2014 season, wide receiver Michael Campanaro experienced many ups and downs in his rookie season.

Trading a 2015 sixth-round pick to Cleveland to jump back into the draft to obtain Campanaro in the 7th round, the Ravens were high on the former Wake Forest Demon Deacon. Many in the organization described Campanaro as “Julian Edelman-Lite.”

The comparsions didn’t stop there.

After just a few weeks into training camp, the Howard County native was being called a “Mini Me” of veteran wide receiver Steve Smith Sr. His routes were crisp, his hands were solid and his grit and determination were a joy to watch over the summer.

Recently I had the opportunity to catch up with Campanaro and we took a look back at his rookie season and a look at what the 2015 season may have in store for the speedy slot receiver.

Brian Bower: Michael, you just completed your rookie season in the NFL. How big of a transition was it from playing college ball at Wake Forest?

Michael Campanaro: It was a huge transition. It was a lot over the past year even leading up to the NFL draft and making it on a team and the season we had, it was just a big transition. It was exciting. It was the most fun I’ve had playing on a football team since I’ve been playing since I was young. I had a blast. It was a great chance to see what it takes to play in the league and seeing great players and kind of regroup going into the offseason knowing what it takes to succeed as a player.

Bower: Your team fought adversity all season long battling through it to earn a trip to the postseason. What does that say about the Baltimore Ravens?

Bower: You played in just four games in 2014 catching seven passes for 102 yards and a touchdown. When you were able to make it onto the field you provided the team with another playmaker. Labored by a bulky hamstring throughout the year Ravens head coach John Harbaugh said you needed to have a strong offseason to maintain being heathy for the season. What steps are you taking to come back stronger?

Campanaro: I’m preparing this offseason like I’m going to play every snap. I’m really going to be getting in great shape. I will be doing all kinds of different programs, Yoga, Pilates, all kinds of running and route running. Just training my legs and getting my flexibility in my legs and gaining strength. I’m going to be in incredible running shape. Coach Harbaugh told me to turn myself into “Ironman” this offseason. We talked about it. I talked a lot with my receivers coach, coach Engram and he had a lot of good advice to give to me on getting the hamstrings right.

Bower: Camp, the Ravens recently lost offensive coordinator Gary Kubiak. How big of a loss is that for the offense and how tough do you think it will be learning perhaps a different offensive system?

Campanaro: I think we will be alright learning a new system or adjusting to the same one. Coach Kubiak is a great coach and anytime you lose a guy like that it’s tough but coach Harbaugh and the staff I’m sure will put together and hire the best available offensive coordinator for us. We have a great quarterback, a Super Bowl winning quarterback and a lot of guys on the offensive side of the ball. We can bounce back and do whatever they decide to do. All the pieces are there and I think they will do a great job of bringing someone in.

Bower: Do you see yourself having an increased role in 2015 out of the the slot position?

Campanaro: For sure. That’s how I’m going to be preparing during the offseason like I’m going to come in and catch a hundred passes. I think that coming in for camp and showing the coaches the improvements I’ve made in the offseason and the type of player I can be for the team, that gets me out there on the field more.

Bower: Camp, returning punts in the NFL can be a dangerous mission. Do you envision yourself in a more permanent role doing that for the Ravens in 2015?

Campanaro: That’s definitely a huge goal for me coming up this season for me. I’m really going to be working on trying to get back there and return some kicks. I got a lot of practice this year just learning. Kick returns are a lot different than punt returns and I’m gonna come in and hopefully show our special teams coach the improvements I’ve made in my special teams game.

Bower: I’m going to give you a few names tell me the first thing that pops into your mind when you hear them. Torrey Smith.

Bower: Finally Michael, the offseason is a short one. Do you have any other plans other than working on your game? Perhaps a relaxing vacation?

Campanaro: I’ve kind of taken some time off like right now but I’m going to start getting back after it very, very soon. I’ve already started doing little things and getting started running on the track and all types of stuff. I’m not taking too much time off just enough to get healthy and rejuvenated. I’m focusing on training and working out to come back strong.

Here’s to a healthy and productive offseason for Campanaro as he looks ahead to the 2015 season.