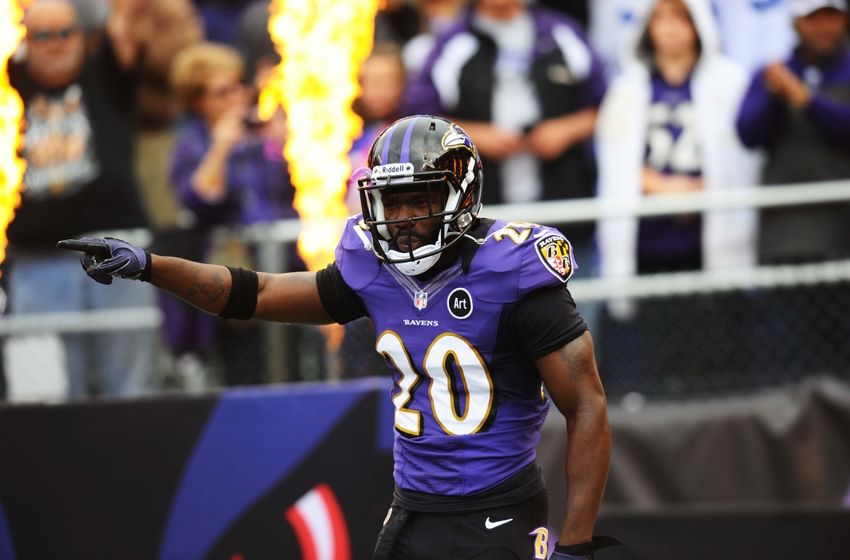 The Ravens, as expected, are ready to induct Ed Reed into the team’s Ring of Honor – when the 8-time All Pro finally retires. And that might not be for another 9 months or so and the Ravens are at least in part to blame.

There’s a buzz in Owings Mills that given the team’s need at safety, the dearth of safety talent in the 2015 NFL Draft and the departure of 2014’s secondary coach Steve Spagnuolo to the New York Giants, John Harbaugh is seriously considering inviting Reed to training camp.

Reed, who once exclaimed during the summer of 2012, “I hate my job but I love football!” is said to have grown closer to Harbaugh since his departure and he would embrace camp more openly particularly if it requires him to take on a tutorial role. This is a developing story so stay tuned.

The NFL schedule has been a topic of discussion at the NFL Owner’s Meeting and some of the prime time games were bantered about. Count me among those who thought it might be quite some time before the league feeds the Ravens another home game on Thanksgiving but according to one source speaking under the condition of anonymity, the Seattle Seahawks are likely to be making their way to Charm City for a showdown of birds on November 26.

Most believe that despite his infatuation with draft picks Ozzie Newsome will NOT use the ten he will show up with during the 2015 NFL Draft. There is a developing story making its way around the league that Ozzie covets a couple of players who could possibly fall into the middle of the first round. One player is said to be Louisville wide receiver Devante Parker.

Parker is visiting in Owings Mills at this very moment and the reason for the visit focuses on Parker’s character. The Ravens wanted to get to know Parker a bit more after word of past college campus transgressions surfaced earlier this week. That could push Parker into the teens where Ozzie could play a little leap frog, hopping up the board twice.

The first landing spot could be Kansas City where the Chiefs apparently covet the former K-State Wildcat, Wichita native and life-long Chiefs fan Arthur Brown. Word is that Brown and the Ravens 26th overall would earn Andy Reid’s 18th overall pick. How Ozzie parlays that pick remains to be seen.

We’ve seen Ravens’ opponents don their throwback jerseys, particularly the jailbirds from northern West Virginia. FINALLY, the Ravens will get their chance. When the Steelers visit during the 2015 season the Ravens will dress in the purple and black uniforms circa 1996. The team has even reached 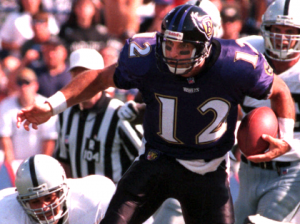 out to Fred Bouchat, the original designer of the flying B, to obtain his permission to use the team’s original helmet – permission Bouchat eventually extended in exchange for a mid-five figure sum from the team.

Speaking of the Steelers, Heinz Field will finally get a makeover. Long known for presenting one of the worst field surfaces in the Western Hemisphere, the Pennsylvania Stadium Authority has procured funds to install a new Momentum Turf field to enable Heinz to host a more diverse mix of events. The NCAA Lacrosse Final 4 is already slated to take place there along with the Spice Girls Farewell Tour in 2016.

If you’ve been waiting for the Ravens to finally play in London, consider this your lucky day! In 2017 the Ravens are slated to play the Jaguars on the road but this time it won’t be beside Friendship Fountain. Instead it will be at Wembley Stadium where you can get fish and chips along with a pint for 12 pounds.

Nepotism Does in Ravens?

Deflate Gate remains unresolved and there’s little reason to believe at this point that the league will do anything about it despite what Roger Goodell claims. But don’t be surprised if Goodell at least keeps the discussion alive in a subtle way.

It may be an effective red herring and take attention away from an even more combustible development.

A source has revealed to RSR that Bill Vinovich, the crew chief for the Divisional Playoff Game between the Patriots and the Ravens, was fully aware of New England’s deceptive formations and has shared with his inner circle that he should have stopped play to clearly identify the eligible receivers for Dean Pees’ defense. Even more alarming is the fact that Vinovich is Patriots offensive coordinator Josh Daniels’ father-in-law.

Back in February it was reported by CBS’ Jason LaCanfora that at the end of the 2013 season the Ravens offered Torrey Smith a 5–year deal for $35M that included $19M in guarantees. Granted, agents have a way of floating numbers out there to inflate the value and demand for their clients, but given the 5/$40M deal that Smith ultimately landed in San Francisco, the report is plausible. 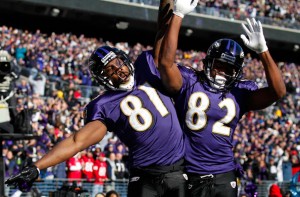 The Ravens were feverishly trying to create cap space to strike a similar deal with the former Terp but word is Joe Flacco wouldn’t budge on his contract to clear cap room for Smith. Apparently he viewed the alleged deal to be No. 1 WR money and Flacco, particularly on the heels of what was essentially a season-ending interception in New England (that he refuses to accept blame for), doesn’t see Smith as a No. 1.

That decision had a domino effect in that it essentially killed another deal that would have delivered Anquan Boldin back to Baltimore. Q is not happy about the vast changes in San Francisco and is said to have wanted to finish his career under the guidance of John Harbaugh. But when the Smith deal fell through, Boldin opted to stay with the 49ers and he then campaigned to bring his buddy Torrey out west.

Currently the recreational use of marijuana is permitted in three States and the District of Columbia. As part of an effort to parallel the laws of resident States the NFL will now permit players of teams that call the States of Washington, Colorado (Alaska is the 3rd State) and DC home to also ingest cannabis without violating the league’s substance abuse policy.

Team officials for the Seahawks, Broncos and Redskins, are quietly delighted by the ruling because they now believe it provides them with a competitive advantage in recruiting.

The Fan is Moving to Television!

It has been a long time coming but CBS Radio’s 105.7 The Fan has FINALLY reached an agreement with MASN to return the audio broadcasts to the small screen. Station head honcho Bob Philips, who worked diligently to bring Orioles’ broadcasts to the FM airwaves simultaneously brokered the TV deal. MASN 3 will provide the live TV feed 24/7.

In a related move Philips will soon announce the return of Anita Marks to The Fan. There is no definitive word on who Marks’ sidekick will be, but early indications point to WJZ’s Marty Bass.

You may have heard that former 98 Rock DJ Mickey Cucchiella has made his way over to WNST where he’s joined forces with Nestor Aparicio. The pairing was curious since the two reportedly loathe each other, but now the story is beginning to make sense.

Given his ties to 98 Rock and 98’s ties to the Ravens, Cucchiella has apparently enlisted the services of Aparicio to co-host sports talk with him, Monday through Friday on 98 from 6AM to 10AM beginning July 1. Cucchiella didn’t exactly part ways with the Hearst Corporation in an amicable way but the station’s plummeting ratings and the “sticky” content provided by sports talk apparently persuaded the suits at Hearst to give it a go.

Despite the public outcry, the Ravens continue to dig their heels in the sand when it comes to an escalator servicing the upper deck ticket holders. The team has repeatedly cited risks of physical injury and costs as the rationale behind their adamant refusal.

That said RSR has learned that prior to the 2016 season the team will install an automated walkway in the club level, similar to what you may have experienced at airports, including BWI. Dick Cass explains.

“We value our club level patrons and suite holders and our collective goal is to improve their game day experience. Enabling our customer to move about the club level in swifter fashion improves their ability to get to and from concessions and back to their seats without missing meaningful action on the field.”

Cass hinted that in 2016 ticket prices throughout the stadium will spike to help finance this project.

In other stadium news, the Bureau of Public Health and Safety now insists that fans who tailgate in all Maryland Stadium Authority operated lots must now drink from plastic containers. Word is that the bureau was appalled by the way the lots were littered after games. Police navigating traffic in the area after games, also noted that many traffic jams were caused by vehicles with flat tires, the result of broken glass in tailgate lots.

Time to Purple Solo Cup up!

“RSR has always had an edginess about them that we could never match for a number of reasons. Acquiring them affords us that edginess, gives BR.com another vehicle upon which we can foster an atmosphere of fun and excitement, AND it gives us an opportunity to mute Tony Lombardi and these unnecessarily controversial April Fools jokes.”

Note: If we got you, maybe you will share a few of the stories with friends in your social media circles. Enjoy your day! ~ TL