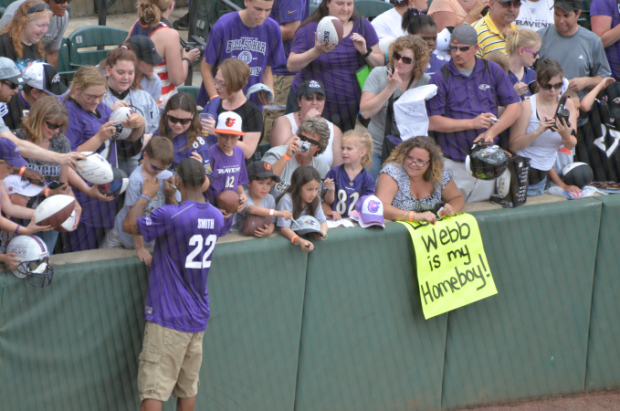 Thank goodness that this dead period in the NFL offseason is dwindling down.

With the 80th Annual draft kicking off on Thursday, April 30th we can finally put aside all the unnecessary bashing by several media outlets just reaching for headlines.

Writers drum up all they can during the “dead period” that lasts following free agency until the draft in order to fulfill page clicks.

Such was the case with Bears quarterback Jay Cutler recently.

Cutler’s criticism over the last few weeks is a prime example of just how far some of those in the media will go to make a story out of nothing.

The disliked quarterback of the Chicago Bears came under severe scrutiny late last month when he donated a signed football for a recent charity event.

His autographed football received no bids during the Chosen Man’s Best Friend and Factor Felines fashion show and charity event. The media then latched on with their talons and didn’t let go, ignoring the fact that it wasn’t attended by a “football crowd”.

Eventually the football was sold (a few days later) for a donation of $100, with the proceeds going to the charity.

Have we hit an all-time low when it comes to just how far we will go to fill an empty computer screen?

While Cutler deserves all of the on-field criticism that he gets, attacking a guy for donating something to a charity event that goes unsold is unnecessary.

In fact, he and the many other pro football players are damned if they do and damned if they don’t when it comes to such things. If he opted not to donate an item, he would have faced the same outcome.

Over the past several years, I have had the privilege of covering many charity events, including events where several players have given away some of their possessions – as well as their time – to help raise funds for a cause.

Incidents similar to the one with Jay Cutler happen quite often. Many factors go into how an item is sold at such an event.

What does this have to do with the Ravens you ask?

Both in and out of season, Ravens players, along with their foundations, host numerous events to raise money for important causes.

How many of them go unreported?

Sure, the bigger names on the team get covered but they aren’t the only ones doing all they can to help those in need. Rookies, second-, and third-year players also do their part to give back to the community.

We all know that negative news gets the most attention these days. We, the consumers of sports media, are attracted to the stories that spark outrage or aim to demean a player.

In a way, we are the cause of the negativity.

There are plenty of good people in the NFL. For every boneheaded offseason arrest a player gets himself into there are 10 professional athletes doing something positive, yet none of that reaches the front page. We are not attracted to those types of stories the way that we are to the negative ones.

If we want the negative stories to go away, it will require a change in how we consume sports media.

And that would have to start with each and every one of us.