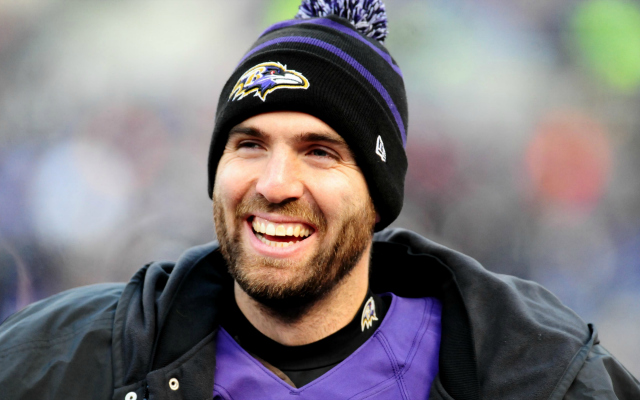 Joe Flacco is the best Ravens quarterback in franchise history. He’s a Super Bowl MVP, he elevates his game in the playoffs, and he always puts the Ravens in position to make the playoffs. He earned that monster contract that he signed. I can’t speak for Steve Bisciotti, but I’m sure he was happy to sign the check that kept Flacco in Baltimore for the foreseeable future.

Even with all that said, Joe Flacco is not an elite quarterback, at least not consistently, and that’s okay.

Yes, he goes through stretches where he is as good as anyone in the game, but at times, he can look like a very average quarterback at best. He’s proven that when he’s surrounded with capable talent and pass catchers he can produce at a very high level; however, he’s also shown that when he’s surrounded with mediocre talent, he looks, well, mediocre.

Assuming the Ravens don’t intend to sign Greg Jennings, who is literally the only capable pass catcher left on the market, or somehow make a trade that brings in a quality receiver, they are kidding themselves if they think that they can maintain the success they achieved on offense in 2014.

In a recent interview, assistant general manager Eric DeCosta gave his take on the Ravens situation at wide receiver.

“You can look at any team in the league that has good receivers, and you’ll see a quarterback who is pretty darn good,” DeCosta told the Ravens website. “You’d be hard pressed to find a really, really good receiver that doesn’t have a good quarterback. In saying that, we have tremendous confidence in Joe Flacco and his ability to develop receivers.”

The problem is Joe Flacco’s history in the league says otherwise. There is no debating he is one of the winningest quarterbacks since he has entered the league, but his ability to develop receivers is questionable. In his seven years in Baltimore, Torrey Smith has been the only receiver to thrive and develop under Joe Flacco. Steve Smith, Anquan Boldin, and Derrick Mason have been the most successful receivers behind Torrey. All three of them were already established players before coming to Baltimore.

The only comparable year to their current roster situation was 2013. The receiving corps outside of Torrey Smith consisted of Marlon Brown, Jacoby Jones, Tandon Doss and Deonte Thompson. That season, Flacco had the second fewest touchdown passes since his rookie season, a career high in interceptions, and a career low in yards per completion. It was also the lone year that the Ravens missed the playoffs.

It’s true that the offensive line was a disaster that year, but even when Flacco did have time to throw, the offense still frequently stalled.

No one in the organization from Steve Bisciotti down seems to think that there is a pressing need at wide receiver. They’ve made it clear that they think that they’ve surrounded Joe Flacco with enough talent to be successful and to build on their productive campaign in 2014.

History says otherwise. Hopefully there’s a plan to bolster the roster before the season begins.

If not, there’s a good chance the offense could take a big step backwards in 2015.