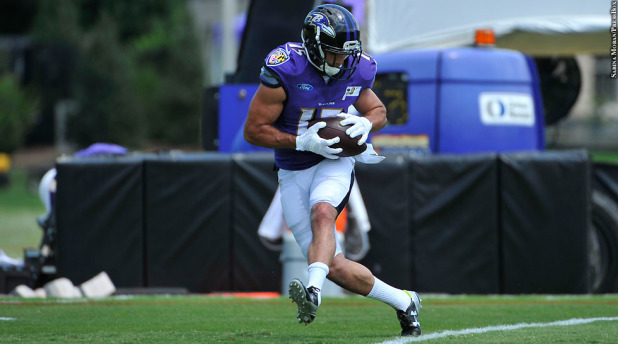 The Ravens kicked off their first-of three joint practices with the Philadelphia Eagles on Wednesday. Conditions in South Philly were warm & humid, and although this seems to be the year of the training camp fight, this one went off without incident.

Both teams were decked on in full pads, and practice began with individual drills before giving way to one-on-one competition between the Ravens running backs and tight ends vs. the Eagles linebackers and safeties, with the Ravens faring well.

In the 15 reps taken, the Ravens won 10 out of the 15 plays. Crockett Gillmore used his size and new found speed to perplex the Eagles linebacker corps. The second-year tight end was quick of the snap and his routes were crisp which created separation with ease.

One of Gillmore’s not-so-finer moments occurred during nine-on-nine reps when a perfectly throw ball by Flacco bounced off his hands into the arms of linebacker Brandon Graham.

Even with Kamar Aiken back, wide receiver Michael Campanaro made the most out of his reps with the first-team offense. During 11-on-11 drills, Campanaro again was able to get behind the defensive backfield where Flacco hit him in stride on a deep crossing route.

The shifty wide receiver recorded two touchdown catches on the day and created match-up difficulties for the Eagles secondary. With the Eagles having to devote attention to the second-year wideout, the Ravens were able to take advantage of the underneath routes.

For most of practice the Eagles defensive line had stonewalled the Ravens running game. Taking reps with the second- and third-team offenses, rookie Buck Allen managed to hit a few holes, making one cut and getting upfield despite his line being manhandled.

The rookie showed great decisiveness and had several big gains including a would be touchdown run during 11-on-11 drills.  Allen also hauled in a number of passes out of the backfield (though they went for little gain).

The Eagles defense forced several fumbles during Tuesday’s practice, stripping several Ravens after catches. Justin Forsett, Nick Boyle and Steve Smith each had the football batted away from them as they headed upfield. In Smith Sr.’s case the ball fortunately rolled out of bounds.  Boyle also ran a poor route and Flacco overthrew him resulting in an interception.

Flacco had an up and down day one against the Eagles pass defense. He had several passes batted down and missed some open receivers including a potential touchdown to Smith Sr..  He did rebound nicely as practice wore on finding Smith Sr. along the sideline with pinpoint accuracy.

Several Ravens linebackers struggled in pass coverage against the Eagles running backs and wide receivers. Second-year linebacker C.J. Mosley and Albert McClellan struggled against veteran Darren Sproles, allowing him to get open for what would have been big gains downfield.

Matt Elam and Perriman were both in street clothes watching practice.

During 11-on-11 team activities, quarterback Matt Schaub threw a perfectly placed pass to wide receiver Jeremy Butler on a fade route for a touchdown. Butler high-pointed the ball and managed to tap his feet inbounds in the back of the end zone.

With Ravens-Eagles practice day one in the books, the teams will be back on the field for day two of their joint practice tomorrow beginning once again at 11:35 a.m..

What is your biggest concern as the Ravens prepare for the 2015 regular season?