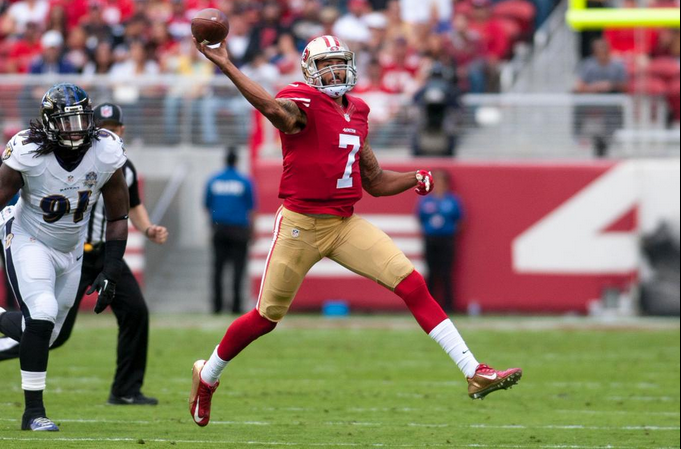 The Ravens lose another close one, 25-20 to the San Francisco 49ers. Our staff reacts…

Colin Kaepernick posts a QB rating of 128.2 and throws for 340 yards. Justin Tucker misses a 45-yard field goal. Shareece Wright is wrong. How do you pick up a (1-4) team’s reject to play against said (1-4) team and expect anything other than what happened today. Did the Ravens think they would gather some 49ers intel?

Not since 1970 has a team started (1-5) and advanced to the playoffs. Every loss has a silver lining from this point forward. How embarrassing will it be when Carson Palmer throws for 400 yards on MNF?

But none of those bothered me more than the offensive line lightly jogging down the field when the team needed every precious second to give itself a chance to win the game.

Another Ravens game, another loss as the Ravens are now 1-5 on the season in which all have come on one-possession losses. Slow start, dropped touchdown passes, dropped interceptions and costly interceptions all play key roles in the worst start in franchise history.

Another poor performance by the secondary again where obvious communication issues continue…then again not sure what else Harbaugh and company expected putting Wright opposite of Smith.

Expecting 1-6 after Monday night against Arizona.

Do me a favor – go read Dev Panchwagh’s BATTLE PLANS for this week. Specifically on the defensive side of the ball. Two of his keys to the game were to not fall for the 49ers’ pre-snap movement or misdirection and to always keep a safety over the top of Torrey Smith.

What do we see in the first half? The defense repeatedly falling for motion and misdirection, resulting in fullbacks running wild everywhere, and then a loooooong TD to Torrey with nary a safety in sight. Now, Dev does a great job and spends several hours per week on his Battle Plans pieces. But the time he puts in obviously pales in comparison to that the Ravens coaches put in. So why does he see what they so clearly fail to?

Then of course there was John Harbaugh’s classic clock management (using zero time outs in the first half, then one on the second offensive play of the second half, followed by an unwinnable challenge later in the half), Joe Flacco going all YOLO on a back-foot floater interception, and Marc Trestman continuing to call the bootleg that the defense hasn’t fallen for since Flacco’s rushing TD in the first quarter against Cleveland. Throw in Justin Tucker stepping in a hole and missing a FG, Jimmy Smith committing a hold at the worst possible time, a couple dropped TDs, and Shareece Wright literally falling down in coverage and you have yet another frustrating loss.

Flacco and Smith Sr may have had big days stat-wise, but the offense just couldn’t get it done when they needed to. Most of those stats came when they were down by two scores, so it’s a bit deceiving. This offense just does not have the weapons needed to be successful in the NFL. Defensively, they just are not very good at all.

The Ravens are now tied for the worst record in football. Let that sink in.

A lot of people will say that this is the game that essentially eliminates the Ravens from the playoffs. But let’s be real, if that’s a conversation you’re having in Week 6 you’re probably grasping on to some false hope.

Tip your cap to Steve Smith, what a gutsy performance. Even with broken bones in his back he still did all he could. Joe Flacco has regressed this year. Whether that is because Gary Kubiak is in Denver or his lack of legitimate receivers it doesn’t excuse the two absolutely awful interceptions he threw.

Part of me wants to sit Flacco down and ask what on earth was he thinking throwing that ball up for an interception. Seriously, write down every wrong mechanic a quarterback can exhibit, and that’s what Flacco did on that play.

It was an embarrassing effort from most of the Ravens today. Unfortunately, Shareece Wright looked absolutely clueless out there, as he was the culprit on both of San Francisco’s touchdowns. His best play was a downfield coverage in which the ball was thrown out of bounds.

If it wasn’t for Steve Smith, Sr., this team would be really in the tank (more so than they are already). He deserves a raise.

Save the excuse about the Ravens losing close games. The bottom line is that this Ravens team is a losing one. They’ve gotten what they’ve deserved. Period.

1-5. It is the same story every week. Team starts off slow, gains some momentum and can’t close out the game.

Go ahead and play the “if game” — again. IF Steve Smith catches those two TD’s that hit him in the hands. IF Jimmy Smith hauls in that interception. IF Justin Tucker makes that field goal. IF Joe Flacco doesn’t throw that ball up for grabs in the 3rd quarter. Those were all game changing plays.

That said, those are the things that happen in the game that you can accept because…well…no player is perfect.

What you shouldn’t be willing to accept, though, are players lollygagging during the final minute of the game when the clock is ticking away and the team doesn’t have any timeouts left. Someone will hopefully show that final minute of tape to the likes of Osemele and Zuttah and ask them what, exactly, they were doing on the final five plays of the game when they were essentially strolling around like they were walking through Central Park on a Saturday morning. And Joe’s clock management at the end of the game wasn’t exactly precise, either.

It all adds up to another loss to a pretty bad team, unfortunately.

Oh, and Arizona might put up a 40-spot on us next Monday night.