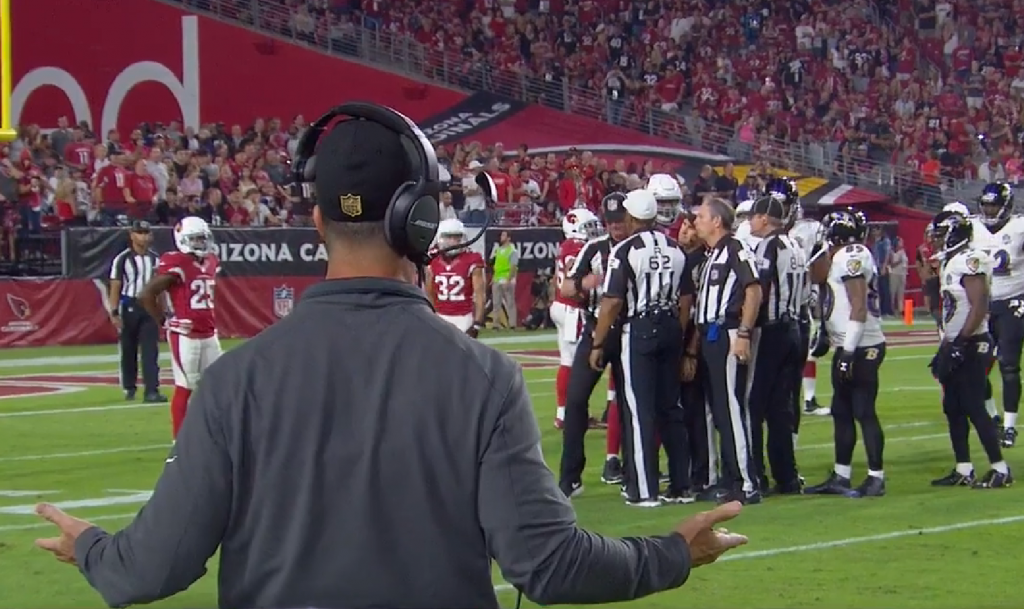 There’s no sugar-coating it – the officiating in Monday night’s matchup between the Ravens and the Cardinals was nothing shy of atrocious.

And what makes it worse is that the results were skewed heavily in favor of the Cardinals, with three major errors in officiating very much leading to another game in the loss column for the Ravens.

Let’s take a look at the shortcomings of Ron Torbert’s crew.

With 8 minutes to go in the 1st quarter and the Ravens marching down field against the Cardinals on their first drive, John Urschel comes into the game, reports as eligible, catches a pass from Flacco and the Ravens have a 2nd and 4 from inside the Carindals 10.

Except there’s a LATE flag thrown.

The official call was Ineligible Receiver, and the claim made was that Urschel did not report.

The result was a 5 yard penalty, that set the Ravens back to a 1st and 15, followed by a few short gains, a sack and a long field goal attempt.

And in case there’s any question about Urschel reporting, here’s the replay.

By the way… What more does an OL have to do to report? Look at Urschel. pic.twitter.com/OP9ZxDtjX3

This is completely inexcusable. In the still below, you can see Urschel signaling to Torbert, Torbert looking directly at Urschel. Heck, you even have Flacco in the background pointing at Urschel to make sure Torbert sees him! And yet… the flag was thrown. 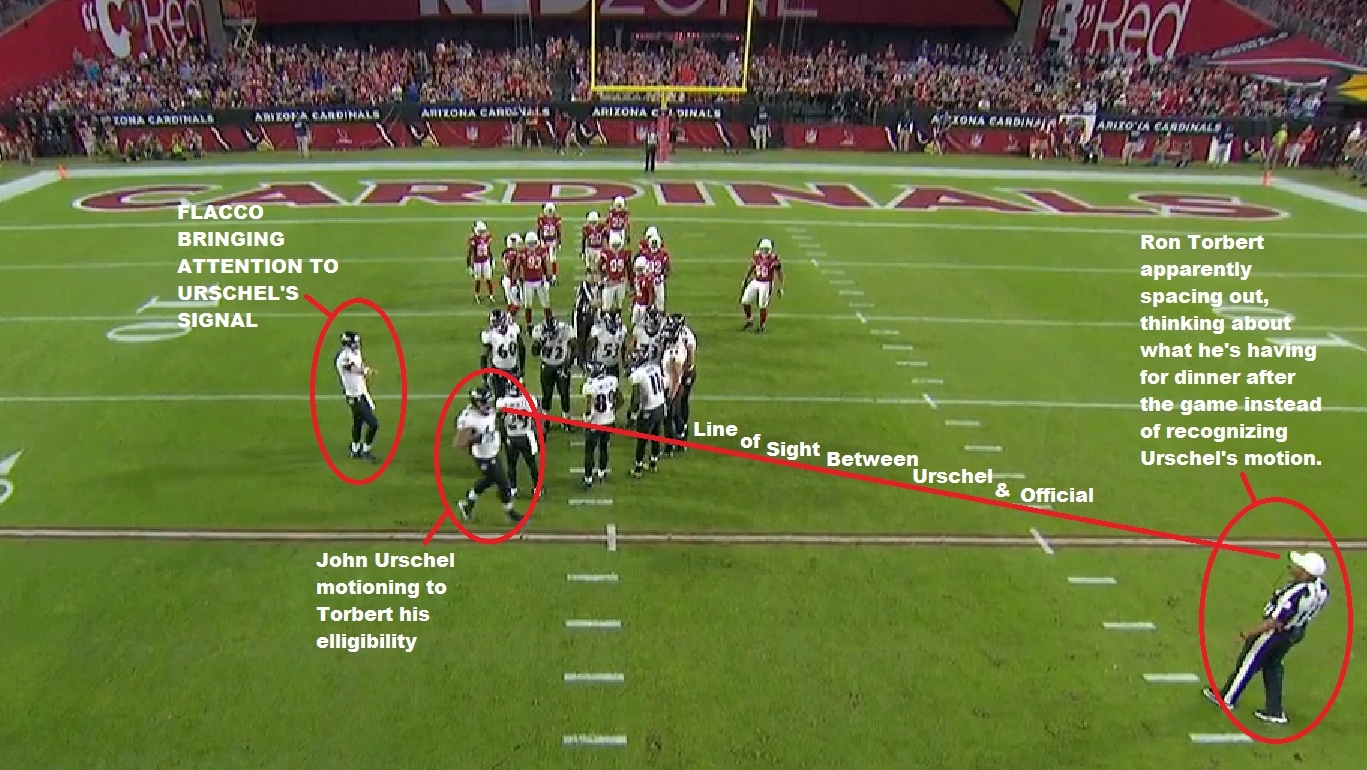 Equally as big of an issue here is when the flag was thrown. This wasn’t an instantaneous flag for Ineligible Receiver once Urschel caught the pass. Instead, the flag was thrown well after the pass was completed, Urschel was tackled, and the markers already changed over to 2nd down with the new spot.

Unfortunately, this delayed call was one of many on the day. All day, the officials were unsure of calls, all of which seemed to err away from letting the players play the game.

Either that, or they’re really unsure of the rules, which is a scary thought.

With _ left in the 2nd quarter, the Cardinals punted the ball to the Ravens, which was received at the 15 yard line. After a short return to the 24 yard line, Ross was hit, the ball popped out, and was recovered by the Cardinals.

In real time, it’s very ambiguous. After review by Torbert and New York, the ruling on the field would stand, and the Cardinals would have the ball.

With a quick freeze frame, here’s what we see. 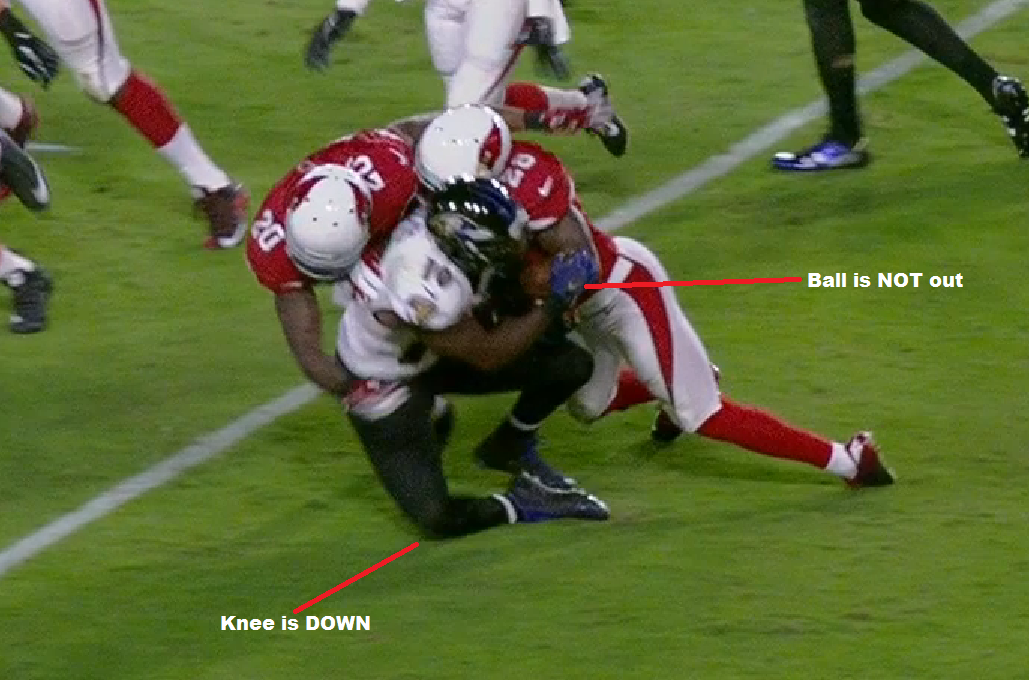 That knee is down, and that ball had not moved. They should overturn this one. But the key in the phrasing is that the call ‘stood’ and was not ‘confirmed,’ which basically means there was insufficient evidence to overturn the call.

Then there was this.

I’m not sure how the officials botched this one. In real time, Chris Johnson was sitting still with all forward momentum halted for 2 SECONDS. Let that sink in. From the time you start reading this sentence until the end is probably just over 2 seconds. And in that time, the officials apparently deemed his forward momentum never stopped.

Here’s the rule on forward momentum.

I’m not sure how much clearer this can be. Johnson is literally sitting on top of Brandon Williams for 2 seconds before he tries to shimmy loose, Williams lets him up with the assumption the play was dead with forward progress stopped (as does EVERY OTHER PLAYER AROUND THEM) and the officials still cannot rule that a stop of forward progress?

I think it’s safe to say that the Ravens have had some poor officiating crews this season, but Ron Torbert’s crew was the worst by a very, very wide margin.