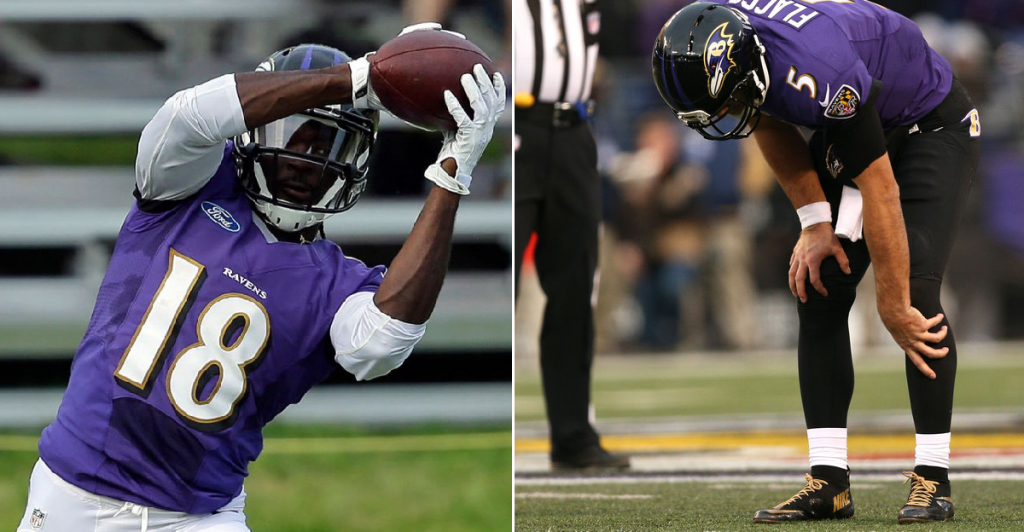 We received a message on Facebook from one of our fans requesting that we keep a time log of all of the season-ending injuries. Only players who will either be on Injured Reserve in the coming weeks, are already on IR, or received an injury settlement will qualify.

“Perriman walked off the field gingerly under his own power, and then went into the locker room with a trainer. The injury is not expected to keep him out for long.” – Garrett Downing, BaltimoreRavens.com

“‘It’s not serious. It’s all sound,’ coach John Harbaugh said [regarding Perriman]. ‘He’ll be back as soon as his knee feels a little bit better. It could be as early as tomorrow or a couple of days at the most.'” – Jamison Hensley, ESPN

“Meanwhile, Ravens coach John Harbaugh said that rookie wide receiver Breshad Perriman has been diagnosed with a bruised knee. Perriman landed on his knee while making a catch during the Ravens’ first full-team practice Thursday. He’s regarded as day-to-day, according to a source. Perriman hasn’t undergone a magnetic resonance imaging exam yet.” – Aaron Wilson, Baltimore Sun

Perriman injury update: “Although the injury isn’t considered major, sources said it may sideline the speedy first-round draft pick longer than the Ravens had initially hoped and he could be out as long as as a week.” – Aaron Wilson, Baltimore Sun

“…the Ravens definitively learned that Elam would not be available in 2015.” Jeff Zrebiec, Baltimore Sun

“Harbaugh first classified it as a bruise, then days later described it as a ‘sprain, bruise, tendon or whatever.’ He said today that both he and Perriman are eager for his return.” – No timetable for injured wide receivers Breshad Perriman, Marlon Brown to return; Jon Meoli, Baltimore Sun

“‘[Breshad] Perriman is going to be a couple days, I think,’ John Harbaugh shared after the conclusion of practice.” – Tony Lombardi, Russell Street Report

“Urban tore his biceps muscle when his arm got extended during a minimal-contact drill in practice Thursday. An MRI confirmed the injury, the recovery from which typically takes 12 to 14 weeks, Ravens coach John Harbaugh said.” – Jeff Zrebiec, Baltimore Sun

“‘He’ll be back sometime here in training camp, hopefully soon,’ Harbaugh said [regarding Perriman]. ‘I hate that he’s missing it, hate that he’s not out here…He’s got whatever they want to call it with his knee situation there. It’s not something that’s going to keep him out for a long period of time, they tell me,'” – Jeff Zrebiec, Baltimore Sun

“‘It came back essentially normal,’ Ravens head coach John Harbaugh said following Tuesday’s practice [regarding a MRI of Breshad Perriman’s knee]. ‘It’s just gone slower that our doctors anticipated it would. So we wanted to get an MRI to see if there’s something we didn’t know about and there wasn’t. It’s normal. There’s just still a little bit of swelling, still a little bit of a sprain. That’s what they call it. We’re just going to keep working on it.'” – Jeff Zrebiec, Baltimore Sun

“‘I’m asking too,’ Harbaugh said. ‘It’s just slower healing than [the doctors] expected. They really don’t have a timetable right now. That’s all I really have to say on that.'” – Harbaugh on Perriman; Ryan Mink, BaltimoreRavens.com

Ravens place Dennis Pitta on PUP list, out for a minimum of the first six games of the season.

Ravens reach injury settlement, waive Steven Means (no longer on IR, back to 5).
Ravens Tied for NFL’s Most Injuries

“Ravens coach John Harbaugh said on Saturday that there was ‘a chance’ that Perriman could play in Week 1, which led to some speculation about the rookie’s availability.

‘I think I was pretty clear. It’s probably not a real big chance, because he hasn’t practiced,’ Harbaugh said Tuedsay. ‘When he comes [back] … I don’t have a time frame from the doctors. I don’t think it’s tremendously far down the road, or we would have done something else with him, as far as his status.'” – Jamison Hensley, ESPN

Terrell Suggs tore his Achilles and is done for the year.

Breshad Perriman makes his practice debut on a limited basis.

Ravens rule Perriman out for the matchup with the Bengals two days later; Lorenzo Taliaferro listed as questionable.

Breshad Perriman back to not participating in practice.

“Ravens coach John Harbaugh confirmed on Saturday that wide receiver Steve Smith sustained small fractures in his back against the Steelers and will miss Baltimore’s Week 5 game against the Browns.” – Kevin Patra, NFL.com

Lorenzo Taliaferro listed as inactive.
Steve Smith Sr. misses the game due to the microfractures in his back.
Cornerback Will Davis goes down with a knee injury.
Justin Forsett injures his ankle at the end of regulation.

“Wide receiver Darren Waller seemed to hurt his leg playing special teams in the first half. He did not return to the game and left the locker room carrying a bag of ice.” – Jeff Zrebiec, Baltimore Sun

“Head Coach John Harbaugh said ‘the clock is ticking’ on Perriman to make a return, and he doesn’t have any news on how his injured knee is doing, though he does expect some information ‘really soon.'” – Ryan Mink, BaltimoreRavens.com

Ravens announce that Dennis Pitta (14) will not play in 2015 and will be placed on Injured Reserve.

Jeremy Zuttah is active for the game, but re-aggravates his shoulder late.

Jeremy Zuttah (16) placed on Injured Reserve, according to Ryan Mink.

Justin Forsett (18) breaks his arm in the first quarter. He will not return this season.
Joe Flacco (19) tears his ACL and MCL on the game-winning drive of the 4th quarter.