There are so many story lines in this Super Bowl, and in turn, so many different angles for us to take into consideration when we vow our temporary allegiance to a fan base (or at the very least, a gentle golf clap when one team succeeds).

So once again, let’s take a look at the match-up, analyze the angles, and pick the side that has earned Baltimore’s support.

DISCLAIMER: Joseph Randle called and he’s willing to take your bets. That being said, don’t tie my name to it. My call on this game is purely based on emotion, not stats. It’s also based on product endorsements, forehead-to-face ratios, fan bases, former Ravens, disdain for specific players, and the ever-steady, good ole gut feeling. And do you know what happens when you gamble on a feeling in your gut? You end up relying on the Tony Siragusa sponsored Depends, and resent ever stopping by Taco Bell at 2am… 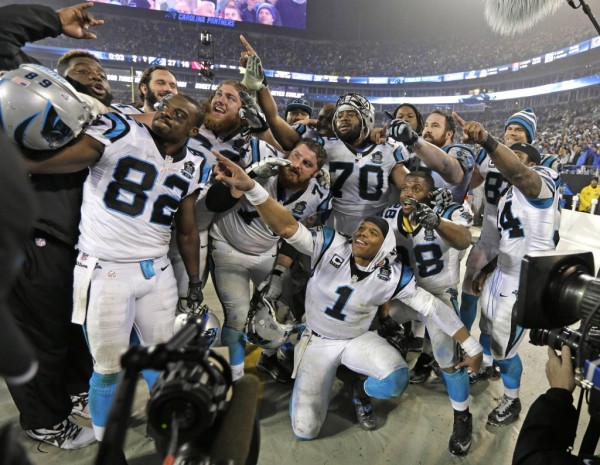 The GOOD: So let’s cut to the elephant in the room and talk about that superstar quarterback, Cam Newton.

The Panthers have been blessed with the up-and-coming Super-Cam, who slowly but surely has taken the NFL by storm. Cam is everything anybody could want in a quarterback: he’s big, has a strong arm, and brings that added mobility that keeps defenses on their heels. Honestly, how can you not love Cam Newton? He has a joy and pure love for the game that I have not seen since Brett Favre was wearing gold & green, and although Cam approaches the game as a professional should, you can still see that child-like excitement in his eyes every time he takes the field. He’s like a kid on Christmas (a kid who perfected dabbing). This is truly a guy who plays for the love of the game, not just the paycheck.

Then there’s the Carolina defense.

As I had mentioned during the conference championship round, the Carolina defense is fast, ferocious, opportunistic, and everything that I miss about defense in Baltimore. That front-seven, anchored by linebacker Luke ‘Pick 6’ Keuchly, are an absolute force to be reckoned with.

The BAD: As much as I love Cam, apparently there’s a handful of couch-ridden critics who can’t stand Cam (Hi Tony!). They don’t like the show. They think Cam’s superman move and his dab are immature and showboating (I’m also convinced these same people hate amusement parks, candy, bacon, and everything else good in life).

On a more personal level, and one that many Ravens fans likely share, I get a little agitated watching Michael Oher succeed. Nothing against the guy on a personal level, as I am never one to wish bad luck or failure on anybody (lie, I wish failure on Ben & Brady), but come on Mike. Ozzie & Co. took a chance on you in the draft, and not that you were ever a terrible offensive lineman, we as fans spent years suffering with untimely false starts, one after another. For some reason, Tennessee thought he was worth a long term deal, realized what the Ravens had already known, and released Oher. In steps Carolina, and once again, Baltimore fans warn them about the false starts and backup-caliber talent they should expect… only to see Oher turn into the solid player that the Ravens expected when they drafted him.

Sour grapes? Sure, but 100% justifiable. Not quite at the level of Jake Arrieta becoming a Cy Young winner after being booted from Baltimore, but a similar concept on the football side for Baltimore. 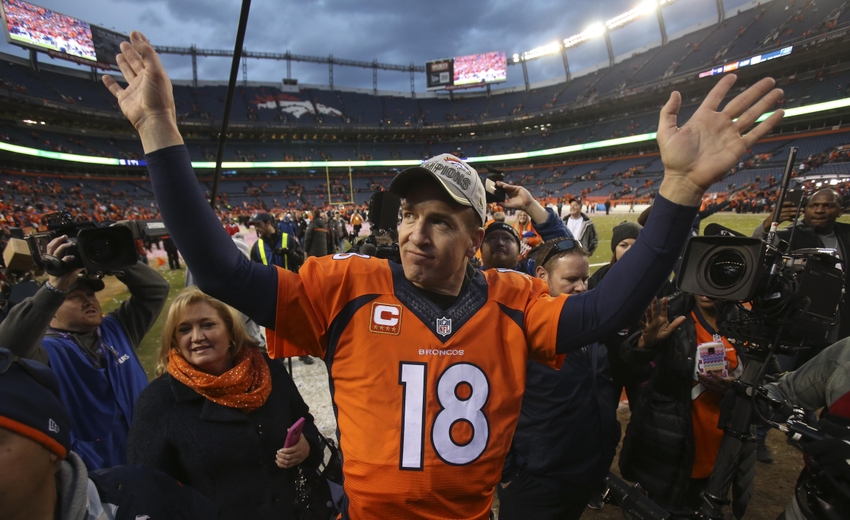 The GOOD: Let’s start with the quarterback position once again, as we address NFL royalty, Peyton Manning.

Some Ravens fans – make that most – loathe Manning. Maybe it’s because he owned us when he was with the Colts. Maybe it’s because they associate Manning with the Colts, and still have Mayflower bitterness that carried over for the duration of Manning’s career. Maybe they actually believe the extremely questionable and flimsy PED accusations recently floated about. But despite what those ‘haters’ may say? I am a Manning fan. I have an affinity for cerebral quarterbacks. I love watching Manning yell ‘Omaha!’ and pick apart defenses. I love the fear that he instills on opposing teams despite his diminishing physical abilities. Very similar to Ed Reed in his final years as a Raven, wouldn’t you agree?

With Manning’s impending retirement all but officially announced, seeing Peyton go out on top would surely be a great way to end his career, just as Ray Lewis had ended his.

The Broncos defense fits the same mold as the Panthers, and gets me all jacked to watch them play. The speedy front-seven, led by Von Miller and Derek Wolfe, are a train wreck looking to plow through the opposition’s backfield. Again, this is what us Baltimore fans miss. I feel as a whole, we are a very defensive-minded town when it comes to football so seeing these two giants tangle should have us glued to the game (other than during the halftime show of course).

Some people are throwing atta-boys to Gary, as they want to see him succeed.

I get that an opportunity presented itself, but I will never shake Gary’s declaration that he wanted to stay in Baltimore for the long haul, help this offense grow, and take this team to a Super Bowl. Instead his buddy, and mortal enemy of Baltimore, John Elway calls begging him to come coach in Denver. So what does Kubiak do? Recants, jumps ship, takes Rick Dennison with him (my candidate to replace Kubiak when he left), then grabbed a bunch of former Ravens to run away with him. The trickle down effect led to the hiring of Marc Trestman, and I don’t think I need to explain my feelings about Trestman anymore that a dog needs to explain the steaming pile he just left on your living room floor.

While we’re on the bitterness topic, let’s talk Elway one last time. Elway flat out REFUSED to play for Baltimore when he was drafted. Not only did he not want to be here, he would’ve taken a shot anywhere other than here. As a resident of Baltimore, that is a total slap in the face. I’ve never liked Elway. Never will. And seeing him succeed hits me right in the feels.

While it appears I’m leaning a bit more in the favor of the Panthers, my decision comes down to one thing and one thing only: PRODUCT ENDORSEMENTS.

Manning has forever been pumping Papa Johns, and personally? Not a Papa’s guy. Too much sauce, and it’s just blah to me. That said, I’m still waiting for them to make a Peyton’s Pizza, with all of the toppings on the bottom half and a big, flat open area of nothing up top (now think of Manning’s face-to-forehead ratio and you’ll get it). Peyton has also found some success of late pumping Nationwide with his little jungle that fans have taken a liking to, as they flood Twitter with their own variations on the jingle (Peyton falls like a little girl).

On the flipside, you have Cam Newton and his Oikos plug. While I AM an Oikos fan, it’s not exactly the coolest of sponsorships. I mean come on… it’s yogurt. Hey kids! Would you rather eat Papa Johns… or yogurt? I rest my case.

But one man indirectly reps my city through the product pride of Baltimore: UNDER ARMOUR

That man is Cam Newton. I don’t care if Cam represents Bisquick, Sears, Victoria’s Secret and Enfamil baby formula. If you rep UA? You have my full attention and full support. 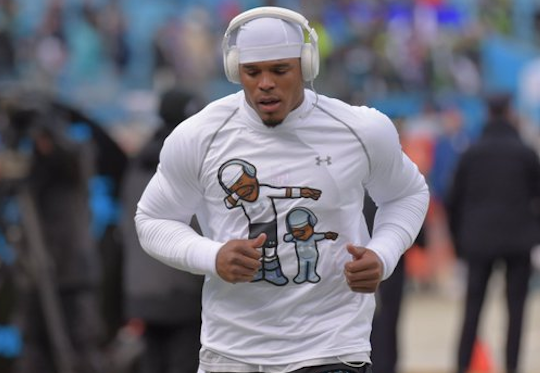 So from Smitty’s current employer to his previous football home…. WE’VE GOT YOUR BACK PANTHERS!

WHO TO ROOT FOR: 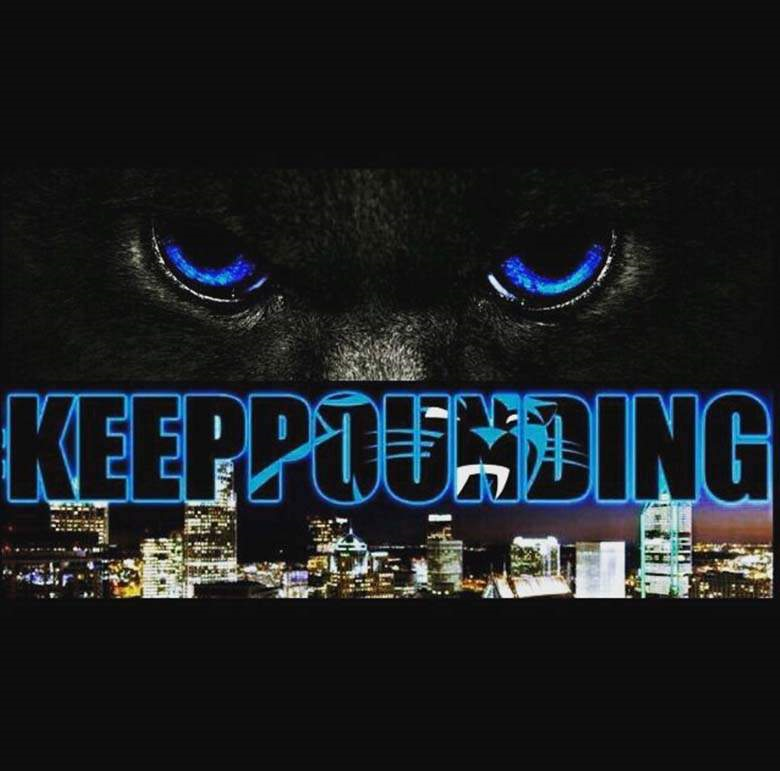