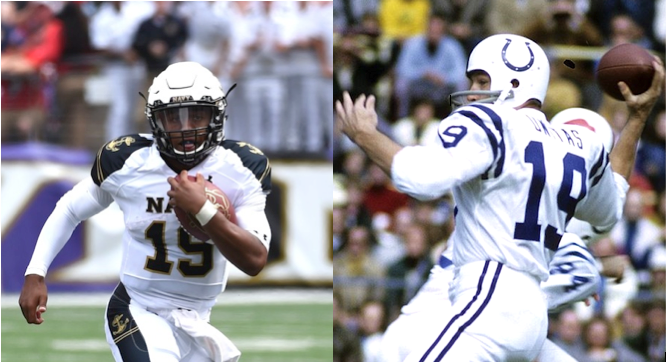 The Legend of 19 in Baltimore

When watching rookie mini-camps, observers regularly refer to their rosters in order to sort through the many unfamiliar names and numbers. Given the previous assignment of most numbers to veterans and even those that no Raven or Raven wannabe wears anymore (75, 52 & 20), eventually the team runs out of numbers.

Consequently unfamiliar numbers appear at certain positional groupings and even some players share a number. For some reason, the number that stuck out for me during this particular rookie camp was No. 6, worn by Keenan Reynolds and most recently worn briefly by Justin Tucker and Michael Campanaro.

Reynolds is listed as a wide receiver and per league rules, that position is assigned numbers 10 through 19 and 80 through 89. So if the former Midshipman is among the final 53 on the Ravens roster as expected, he’ll get a new number.

And there’s no reason why Reynolds can’t be assigned his college number.

Nineteen is near and dear to the hearts of Baltimoreans. The digits are intertwined in the fabric of Baltimore’s sports heritage. But let’s face it, John Unitas played for the Baltimore Colts not the Ravens. And the legend himself even gave his blessings to former Raven Scott Mitchell who sought permission from Unitas to wear the number. Mitchell played in just 2 games for the Ravens.

But Reynolds is a completely different kind of player. He’s a Naval Academy graduate who won the Pat Tillman Award, presented to a player “who best exemplifies character, intelligence, sportsmanship and service. The award is about a student-athlete’s achievements and conduct, both on and off the field.”

Reynolds was also awarded The AAU James E. Sullivan Award, presented by the Amateur Athletic Union (AAU) to “the most outstanding amateur athlete in the United States.”

Houston was once the home of the Oilers and Earl Campbell – the “Tyler Rose”. Campbell had a Hall of Fame career in Houston, remains part of the community and is a prominent businessman in Austin, Texas. Yet his No. 34 is regularly assigned to Houston Texans’ players.

Why shouldn’t the Ravens assign 19 to a deserving player like Reynolds? 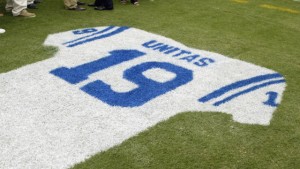 It’s a touchy subject for some and one might think that the Unitas family would be among those most attached to the legend of “19”. To take the pulse of the family I reached out to Joe Unitas who is deeply immersed in a film project entitled “Unitas We Stand” that chronicles the life of his legendary Dad.

“Tony, you know my dad never really cared much about stats, numbers etc. Only thing was, ‘Did we win?’

“When Scott Mitchell came to Baltimore he wore 19. Scott asked my Dad if would he mind. He didn’t.”

But what about Reynolds?

“I think it would be great if Keenan wore 19. He is a tremendous athlete, and probably an even better young man. What I’ve seen of him on TV and interviews he handles himself very well, he’s a true leader, awesome work ethic, someone to be respected, and a guy that many of the young kids should look up to and try to model themselves after. If he wants to wear 19 I’m all for it as I’m sure my Mom, Chad and Paige would be as well.”

It’s hard to find fault in the logic.

If there were ever going to be a real passing of the torch that is the No. 19, you would be hard pressed to find a better recipient in the modern day than Keenan Reynolds.

If he wants it should the Ravens assign No. 19 to Keenan Reynolds?