For Some We Will Always Be Ravens24x7

It’s mind-boggling to think that I started Russell Street Report, fka Ravens24x7.com, nearly 13 years ago. I’d like to say that I knew back then that our website would have the staying power it has enjoyed, but I’d be lying.

The truth is I had no idea where it might go if it went anywhere at all. The only thing I can really say with any degree of certainty when this piece of real estate on the worldwide web launched, is that I had something to say about the Ravens and I wanted to say it in a unique way.

Now whether anyone wanted to listen was up for debate. I guess in a way, it still is. 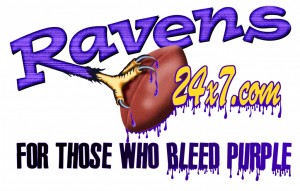 It’s funny when you look back on things. In one way it seems like such a long time ago when we got started on the road to Russell Street. In other ways it seems like only yesterday. My only real plan was to provide intelligent commentary (again, that’s debatable) from a fan’s perspective. The rest just sort of happened during the 13-year journey.

But my journey started many years earlier.

The first few years of my life I resided in Fells Point at 1618 Shakespeare Street. I was the first born in my immediate family and we had the third floor of my grandparent’s 3-story townhome. I’m told it was a sweatbox in the summer and an icebox by way of winter. I recall neither of the experiences but I’ve heard the stories time and again, whether summer or winter, of how I ripped off my diaper, stripped down to my birthday suit, and delivered a high-arching stream across the room to remind my parents that it was time to wake up.

When my Mom was expecting my sister, we moved from Fells to Homesdale Avenue in the Parkside area of North East Baltimore. There we stayed until 1984. Mom and Dad picked the area due to its proximity to Catholic schools that they planned for my sister and me to attend. Most Precious Blood was my elementary school and Archbishop Curley my high school. Those choices affected my life in such positive ways – and they still do to this very day.

When I prepared to move on to college, my plans were grandiose. I brought home brochures from the University of Miami. I wanted to be a Hurricane but thanks to my Uncle Joe’s influences, my sights drifted from the big, out-of-town, tropical-weathered campus to a small, local college sitting on the corner of Charles Street and Cold Spring Lane. It was there at Loyola “College”, that the seeds of my journalistic prowess (ok, play along with me here) took root.

I majored in Business Administration only because I had no clue at the time what I wanted to be, but somewhere along the line I knew that I’d be “in business” in some shape or form. So Bus Admin seemed like a safe play.

Upon graduating from Loyola I went to work for Roper Eastern in Columbia where I was an Assistant Product Manager in their window products group. The gig didn’t last long. There was upheaval in the management ranks and that made it difficult to gain any career traction. My ambitions weren’t a match for the company’s sluggishness and I moved on to accept a sales position (officially “Marketing Representative”) with Xerox Corporation.

Xerox was an outstanding place to learn about the art of selling and it was there that I established some friendships that remain strong to this day. From Xerox I moved into the world of equipment finance and leasing where I stayed until 2005. The industry by then became fractured and there was a ton of divestiture, consolidation and acquisitions going on – so much so that during the span of 5 years I had worked for 3 different companies without changing jobs.

That made it difficult to evoke confidence from my customers, and that ultimately put a stranglehold on my earnings potential. During my last year or so in commercial finance as a Regional Manager for Boeing Capital, we were instructed to not seek new business.

But the effects of 9/11 gripped the airline industry, which had a negative rippling effect on our parent, Boeing. They were instructed by the brilliant financial minds of Wall Street and the banks that provided Boeing’s lines of credit, not to take on additional debt. Boeing Capital was in the business of leveraging new debt for profit.

We were forced to flip the sign on our doors to “Closed”.

I was then faced with a dilemma.

Should I use the free time to improve my golf game or build up Ravens24x7.com?

I chose the latter.

As the popularity of Ravens24x7.com grew, so too did our customer base. Soon managing a website covering the Ravens became my full-time gig. It was a risky move given my financial obligations but it was one that I believed in my gut that it was a chance I had to take. I’d rather take the chance and fall than to never take the chance at all. I was determined to put into practice the credo that I so often recited to my kids…

“Do what you love, love what you do.” 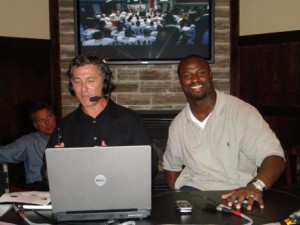 Along the way I’ve met many wonderful people. Some are our writers who have become friends. Others include prominent members of the Ravens organization, local and national media personnel, the players and of course, the many fans I’ve had the privilege of meeting thanks to this spot in cyberspace that you are now visiting.

What lies ahead is a bit less uncertain today than it was back in 2003. What is certain is that we’ll keep doing our very best to provide you Ravens coverage from the perspective of fans.

“Fan”, a badge we wear proudly.

That’s who we are.

That’s who you are.

No wonder this has worked out so well.

Here’s to the future!

As we sift our way through OTA’s and mini camps, one staff member suggested that as we wait for more substantive, on-the-field content, why not have our writers tell their story of how each landed here at Russell Street Report.

The backgrounds are diverse.

These are our stories.

We hope that this series proves to be an interesting peek behind the curtain here at RSR. Thanks for your indulgence.