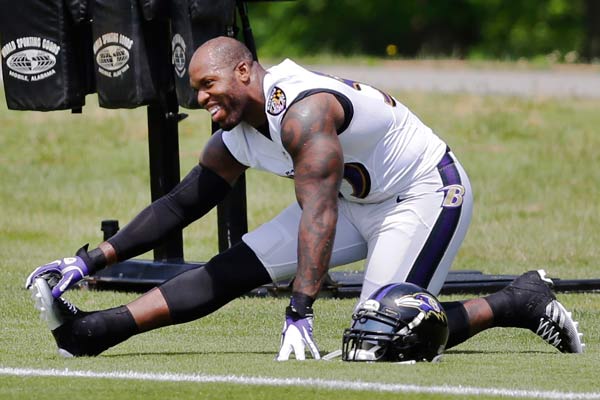 Is Terrell Suggs Out of Shape?

Press play to listen or read the transcript below…

Many criticized Terrell Suggs for abandoning the team following his season-ending Achilles tear in 2015. He was rarely seen and the clamor about his absence only worsened due to the presence of Steve Smith, Sr., who tore his Achilles less than 2 months later.

Smith was seen supporting his teammates and along sidelines with crutches during pregame warm-ups following his injury.

Critics openly opined about Suggs not providing similar support. After all, wasn’t he supposed to be one of the team leaders?

Fast-forward to 2016’s mandatory mini camp and Suggs wasn’t seen and failed to address the media in person. He did release this statement:

“I know there are many questions about where I am with my injury. While I respect the media’s right to ask, I hope everyone can respect that I’m 100% focused on rehabbing and preparing to be the best player I can be at the start of our season. I will address all of those questions during training camp.

The failure to address the media in person fueled speculation about Suggs’ conditioning. After all he has been known to report to Owings Mills in July with a bloated waistline.

Was he ducking the press in order to avoid scrutiny over sloppy conditioning?

Might he again use camp as a tool to get back into shape?

Using camp as a conditioning tool taxes the body and drains the fuel tank needed for the grind, the marathon that is an NFL season. Shouldn’t it be Suggs’ responsibility to report to camp in shape the way former leaders Ray Lewis and Ed Reed always did?

Suggs will be 34 one month into the season.

He’ll be coming off his second Achilles tear.

He isn’t expected to be a participant during the preseason.

And he’ll be 20 months removed from his last sack when he steps on the field in September.

An out of shape Suggs doesn’t bode well for the 14-year vet’s future or any Hall of Fame consideration.

Will it sizzle or fizzle?

What do you expect from Terrell Suggs in 2016?