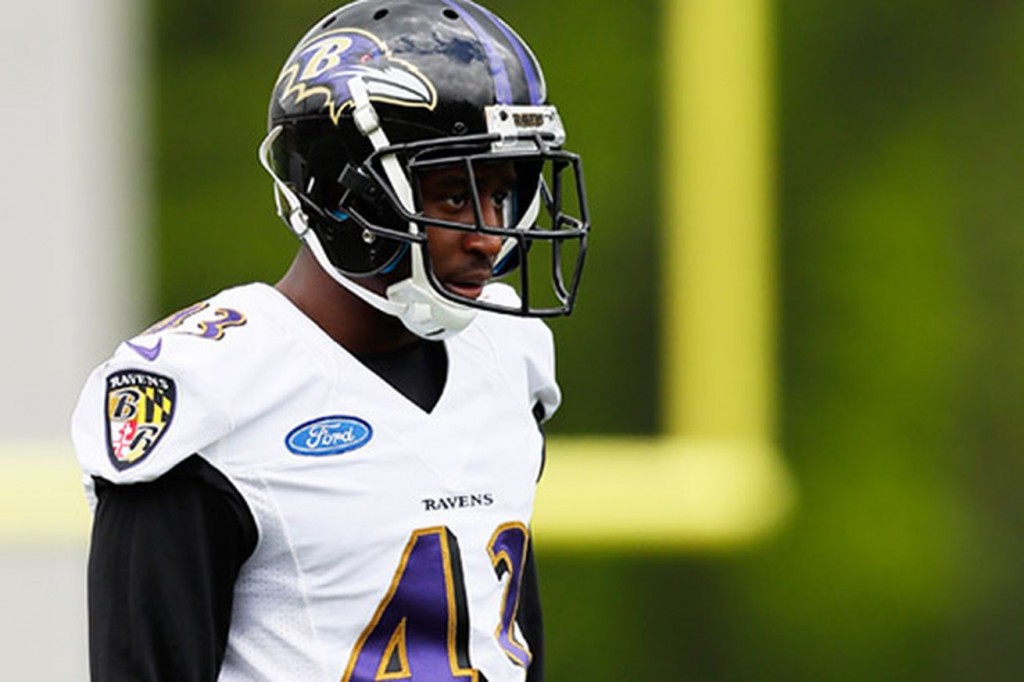 There is one player every summer that comes out of nowhere, turns heads, and instantly becomes the guy all in attendance search out. They’re just noticeable; they stand out.

The player fitting that bill through the first week of training camp?

Coaches like to talk about “stacking days,” and that’s just what the former Potomac High School (Oxen Hill, Maryland) standout has been doing in Owings Mills.

It hasn’t just been those standing around on the sidelines that have noticed how impressive the play of Young has been. It’s fellow corners, his teammates, and more importantly, his coaches.

“Tavon, he just gets better every single day,” remarked secondary coach Leslie Frazier. “He is doing a great job on special teams. He is doing a very good job playing both the corner position and the nickel slot position.

“The game has not been too big for him as a rookie. [I’m] anxious to see how he will play once we start playing against other opponents, but he has been terrific here in training camp.”

For any rookie, adjusting to the speed of the NFL is a work in progress in itself. Young however, seems to be adapting to the speed at an accelerated rate, instead citing his biggest struggles so far as learning Dean Pees’ playbook.

“College is a whole other playbook and that’s been the biggest thing, mastering the defense,” said Young following Friday’s practice.

The fourth-round draft pick has quietly made his mark on the defensive side of the football. Standing 5’9″, Tavon has kept the bigger Ravens receivers he’s battled at bay, something he’s prided himself on since arriving in Baltimore.

“I just play ball,” remarked a smiling Young when asked how he has compensated for the vast size difference between him and bigger receivers.

“Sometimes it’s that simple – just play ball and do what got you to this point in your career.”

Young’s done exactly that. He has risen from reps with the third-team defense to the second-team, wreaking havoc on wide receivers and making quarterbacks Ryan Mallett, Josh Johnson and Jerrod Johnson look elsewhere before throwing his way.

The youngster plays with an intensity that has been missed at the cornerback position over recent seasons. He has notched an interception or a near-interception every day since the beginning of training camp. He isn’t letting up any time soon either.

“As many as I can get,” said a smiling Young when asked about how many interceptions he wants to get this season. “Put me down for 100.”

His defensive prowess aside, Tavon has also been a standout on Jerry Rosburg’s special teams unit. He’s made his mark serving as a blocker, shielding gunners on the punt returner team, fielding punts and kickoffs and even has a blocked field goal to his credit.

While there are still plenty of snaps to be had until week one of the season, Young is just hitting his stride. The rookie cornerback knows the amount of reps you take doesn’t define you, rather you define the reps, something he took to heart this offseason in preparation for training camp.

“Just working hard at all times,” remarked Young about his philosophy. “I never took off this offseason. I haven’t took vacations. It was just all work back to back to back. I just been talking to older guys and learning from the best on our team.”

His goal is to get better daily in all aspects of his game. No one can question his work ethic and so far.

So what’s next for the rookie?

“Have a great preseason.” he says. “Special teams first then working my way up the defensive depth chart.”

While it is way too early to predict just what kind of career Tavon Young will have in the NFL, it’s certainly been fun for the past two weeks watching him get better and better.