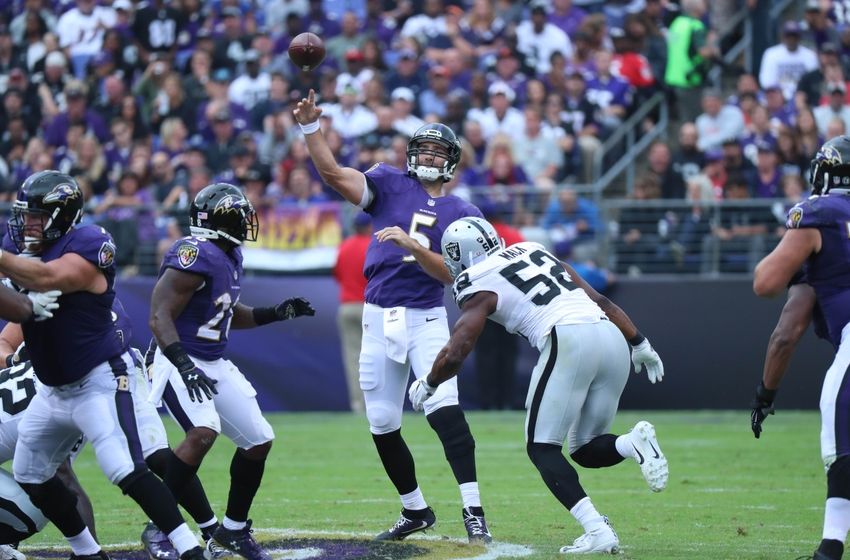 Baltimore’s magic finally ran out in Week 4 as the Ravens lost to the Oakland Raiders 28-27. It was the fourth one-possession game for Baltimore in as many weeks but the first it couldn’t win, despite scoring 15 fourth-quarter points. It’s hard to feel good after a loss, but in some respects, this performance from the Ravens was even better than what we saw in some of their wins. Here are the week 4 Ravens Bulls and Bears.

Finally handed the reins to the rushing offense, Terrance West made the most of his opportunity. He finished with 113 yards and a touchdown on 21 carries. It was easily the best rushing performance from any Ravens back this season. With the release of Justin Forsett on Tuesday, West seems in line to be the team’s lead back moving forward, though coach John Harbaugh is hesitant to officially declare anything. A repeat performance against Washington this week should solidify West’s position on the depth chart.

It now appears as though Week 1 was the aberration for Steve Smith, which is good news for Ravens fans. After totalling just 19 yards in that game, he has improved each and every subsequent week, culminating in his 111-yard output against the Raiders. The demise of Smith seemed imminent with the way he performed that first game. No longer. He now looks like the team’s go-to option.

The Baltimore defense didn’t do much to pressure Derek Carr, but it did do a great job in shutting down the Raiders’ running game. Part of that success can be credited to Brandon Williams, the big man in the middle. He didn’t fill up the stat sheet or create QB pressure through the middle, but Williams was one of the main reasons Oakland averaged just 3.3 yards per carry on the day. Outside of a 28-yard scamper by DeAndre Washington, no single run for Oakland even went 10 yards.

We’ll keep him here until he misses a kick.

Perhaps it is too high a standard we are placing on Joe Flacco, but the Ravens need more out of him. Whether by choice or the design of the offense as currently constructed, Flacco threw the ball 52 times, yet failed to reach 300 yards and only threw one touchdown. He was also playing against one of the worst defenses in the entire NFL yet didn’t see his team reach the end zone until 2:45 to go in the third quarter. Flacco and the Ravens ran 26 more plays than Oakland and outgained them 412 to 261, yet never had control of the game.

After weeks of disappointment, the Ravens finally outright released Justin Forsett (for the second time this season). With the way he was being utilized, leading to being inactive for Week 4, it seemed like just a matter of time. Of course, now you wonder why the team signed him to a fresh deal right before the season started.

We need to start seeing more from the “rookie” wide receiver. Perriman is still essentially a rookie, which gives him some leeway, but at some point Baltimore needs him to become a real threat down the field. He has just eight total catches in four games and is squarely behind a number of options in the passing pecking order. CBS indicates an injury to Smith or Mike Wallace is necessary for Perriman to break out, but it seems he could easily build his own opportunity if he earned it.

No one exactly expected James Hurst to excel in his spot start at left tackle against the Raiders; he certainly didn’t disappoint in that regard. Hurst was playing in place of the injured Ronnie Stanley and helped contribute to Flacco being hit six times and sacked twice. The Ravens had little time to throw, which led to tons of underneath routes. Coach Harbaugh expects (hopes) Stanley will return this coming week.