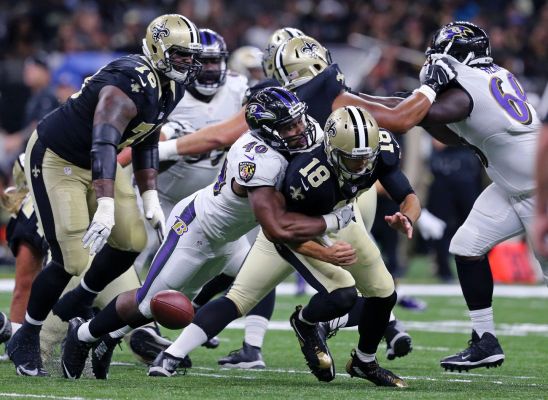 When Terrell Suggs left the game this past Sunday against the NY Giants with a torn left biceps, so too did any semblance of a pass rush. Suggs has five of the Ravens 11 sacks on the season and he was the only one to get close to Eli Manning, registering the Ravens only sack and QB pressures on the afternoon.

Now at 34 years old, Suggs will be asked to play through yet another major injury. How effective will he be?

Press play for a possible solution or read the transcript below…

The plan was for the Ravens to pair Suggs up with another aging edge rusher, Elvis Dumervil. Dumervil at 32 looked like a shadow of his former self during his only 2 outings of the season and didn’t register a single defensive statistic. And with his problematic foot, we have no idea when he’ll see the field again. It could leave the Ravens counting on 2015 4th round pick Za’Darius Smith and 2016 5th round pick Matt Judon who combined, will have 1 sack…the next time either takes down the quarterback. Perhaps Kamalei Correa could have factored in but the coaches have him so tied up in knots that he’s suffering from paralysis by analysis.

And it’s not as if Ravens defensive coordinator Dean Pees has the tactical wherewithal to dial up pressure packages to even disrupt opposing QB’s, much less take them down. With a thin secondary that was shredded by Eli Manning and Odell Beckham, Jr. when the pass rush checked out, what can Pees do?

But maybe they could reconnect with an old friend – rookie Victor Ochi who is now parked on the Jets practice squad.

Ochi was praised by the coaching staff for his work ethic, relentless motor and skillfulness on the edge when rushing the passer. Sure, detractors will say that he’s small at 6’1” and 246 pounds and that he can’t hold down the edge v. the run. But neither can Dumervil at 5’11”, 260 pounds. Hasn’t he been reduced to a situational player when healthy?

Even the former DPOY, Terrell Suggs was a situational player as a rookie.

If the Ravens have room for the very limited Dan Brown or if they are seriously considering making room for draft duds like Matt Elam and Lorenzo Taliaferro on the 53-man squad, why not take a shot on someone who addresses what is arguably the team’s biggest need – an edge rusher?

What’s there to lose?