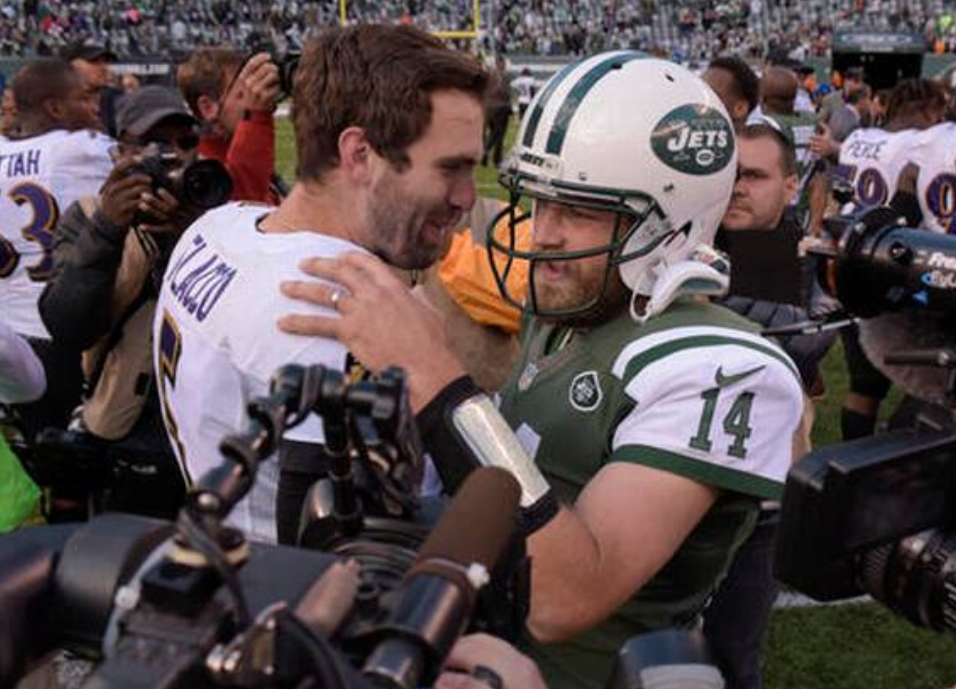 Following Sunday’s game, on the heels of a horrific outing, Joe Flacco was caught on camera joking with Jets QB Ryan Fitzpatrick. Meanwhile fans could barely look at their spouses and muster up the energy to give a fake smile. The thousands of fans who made the trek up the New Jersey Turnpike to MetLife Stadium second-guessed their investment of time and money.

Across Ravens Nation, weekends were ruined.

So it’s only natural for fans to wonder, even get upset at Flacco laughing off the team’s fourth consecutive loss.

Being around Ravens players on occasion, it has been my experience that they don’t celebrate a win the way fans do, nor do they grieve a loss quite the same way that fans agonize over them.

If a win took place on the road, the flight home is a happy, celebratory one. But the next day, they hit the cold tubs and try to drain their bodies of lactic acid before their day off. On Wednesday it’s back to business.

For them, it’s business.

Players and coaches are acutely aware that their jobs are anything but stable during a difficult season. Players’ jobs, particularly those down on the depth chart, are anything but secure. A coach could add a player not currently part of the 53-man roster to a struggling coverage team, and such a move always triggers a corresponding move.

And that move could forever affect a career.

Win or lose, just do your job. The players turn their focus to the next game in order to be prepared for the tasks at hand.

There’s no time to gloat after a victory or pout after a loss.

Just do your job!

Recently I hosted a show featuring Terrance West and his guest Stephen Houston. Houston is a running back who went to school at Indiana and has bounced around from the Steelers, to the Patriots to the Ravens practice squads. I asked Houston what it was like playing for Mike Tomlin and Bill Belichick compared to John Harbaugh.

“John Harbaugh is the man but mostly I’m happy for the work.”

Those words were telling.

They were delivered by an athlete who is 6’0” tall, 230 pounds, runs a 4.42-40, has a 40” vertical and bench presses 225 pounds twenty-four times. That kind of physicality should translate to more than just the practice squad, but in the case of Houston, he was simply happy for the work. 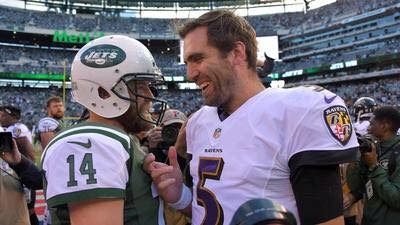 So the next time you see Joe Flacco or any other Raven laughing after a crappy performance, view it for what it is – a temporary break, a chance to forget about the job for a moment and another week of cold tubs, classroom sessions, late night film study, practices and scrutiny by the media and fans.

Yes, it’s their job and those tempered emotions sometimes fly in the face of the wide ranging emotions that accompany our pastime.

Investing our energies in this game is what we do to take our minds off our jobs.

And when things go awry and Joe Flacco goofs off after a loss, many get upset.

But maybe he’s just catching up with an old friend, much like you and I at a weekday happy hour.

And tomorrow, despite Flacco’s laughter, the sun will rise.

Provided of course he stops throwing off his back foot 😉