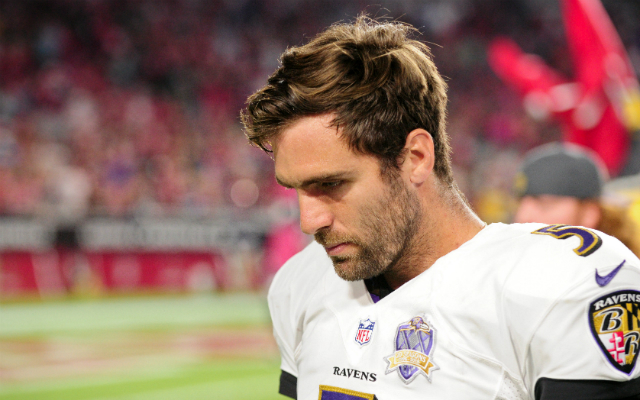 Talk radio and the interwebs are loaded with chatter about Ray Lewis and Joe Flacco. In case you’ve been off the grid since yesterday, Ray challenged the passion of Joe Flacco after acknowledging his physical gifts.

“Gifted? Absolutely. Passionate about what he do? I’ve never seen that. I don’t know what that looks like.” ~Ray Lewis on Joe Flacco

Since the comment, those who have come to the defense of Flacco accurately point out that Joe was the same back in 2012 when he rolled through the playoffs going 4-0 with 11 TD’s and 0 interceptions culminating in a Super Bowl win AND MVP Trophy.

Defenders will further assert that if Joe was playing well and doing so with the same lack of passion, no one would be saying a thing.

It’s also probably true that Ray is right about Joe. He does lack passion, and I’m not defining passion in the way that you see from Odell Beckham, Jr. or even Steve Smith, Sr. Joe could never be like that and if suddenly he became that, we’d all label him a phony.

I’m sure Joe would say that he wants to be great. He may even think he is great but the difference between good and great isn’t physical. It’s mental. It’s commitment to excellence. The greats all have that – Tom Brady, Peyton Manning, Drew Brees, to name a few. Even Ray Lewis.

Joe isn’t that guy. When John Harbaugh tried to reach Joe to let him know about the firing of Marc Trestman, Joe couldn’t be found. 105.7 The Fan’s Vinny Cerrato is a personal friend of Trestman’s dating back to their days in San Francisco in the mid-90’s. Cerrato is like a broken record when it comes to questioning Flacco’s work ethic. I’m not a fan of Cerrato’s, anything but. BUT…

Where do you think his questionable Flacco work ethic theory came from? Connect the dots.

So yes, I agree with Ray.

But that said, Ray should never have gone public with that opinion. NEVER!

Teammates are family and you never go against the family – PUBLICLY anyway!

Got a beef? Then take it in house.

Come down off your high horse Ray. I’m sure there are teammates from your past that might have a story or two about you too.

What are your thoughts on what Ray Lewis had to say about Joe Flacco on Speak For Yourself?