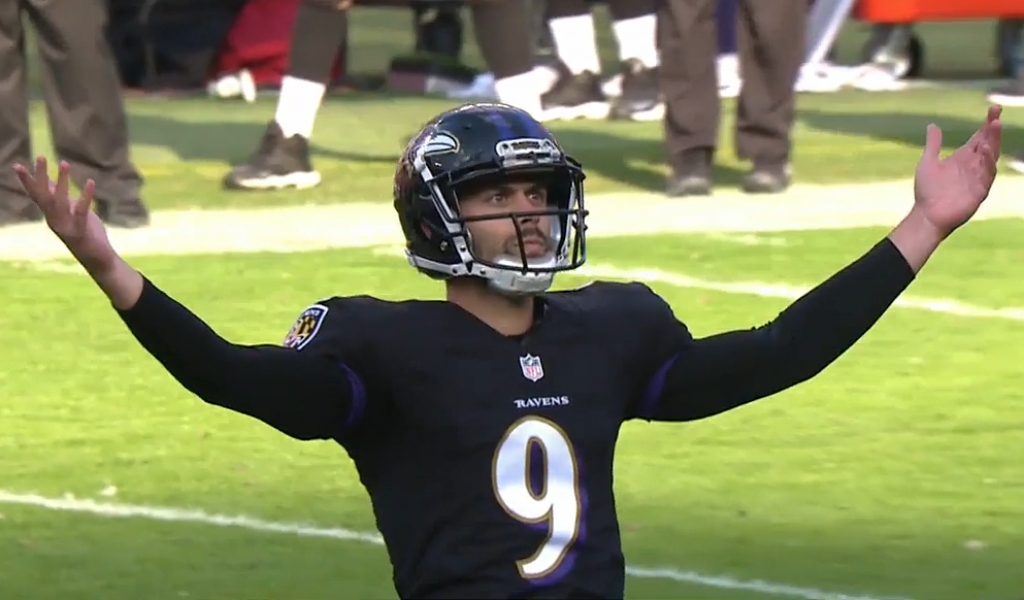 The Ravens game on Sunday against the Bengals marked the 6th time during the 2016 season the team jumped out to a 10-0 lead. Only once in those 6 games have they extended the lead, and that was against the Steelers when the Ravens took a 21-0 lead into the fourth quarter. Three times they’ve completely relinquished the 10-0 lead and twice when they’ve grabbed a ten-point advantage, the Ravens surrendered the lead for good.

But thanks to a defensive front that got hot late in the second half to produce 3 strip sacks and 3 batted down passes at the line of scrimmage, the Ravens held on to advance to (6-5) and take first place by virtue of tiebreakers, over the Steelers who are also (6-5).

Joe Flacco shined at times particularly during the game’s opening drive that was capped by a 14-yard scoring strike to Breshad Perriman. The 75-yard march was purposeful and was executed with great tempo – a tempo that matches up well with Flacco’s DNA (we’ve said something like this before…like many times, right?). 11 plays, 6 passes, 5 runs, 4:45. Flacco also unleashed a few rockets, one to Perriman, a near great play that the receiver couldn’t quite finish; another to Kamar Aiken to help set up Justin Tucker’s first field goal; and one to Steve Smith, Sr. that was negated by an offensive PI. Joe also did a nice job of changing the play at the line of scrimmage on the team’s first possession to convert a tough 3rd and nine. He hit Aiken on a crosser for 11 yards…

Mike Wallace is electric and has “big play” written all over him. The Ravens need to find ways to get the ball in his hands more often but certainly not on a timed reverse deep in your own territory with 59 seconds left and holding on to a one-score lead. What was that? Wallace caught 3 balls for 57 yards including a nicely designed 19-yard swing pass off a fake reverse…Perriman’s tough catch for the score to start the game was a thing of beauty…Both Terrance West and Kenneth Dixon grinded out some tough yards in both the run and passing game. Dixon seems on the verge of a breakout game. 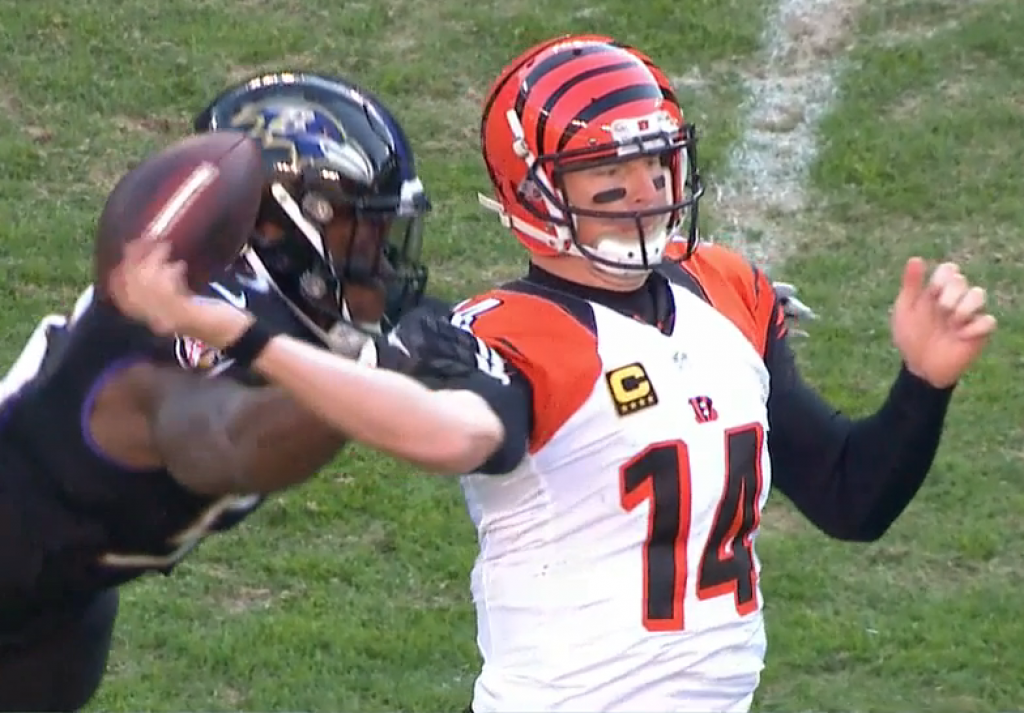 Terrell Suggs gets his first of two strip sacks against Andy Dalton.

Terrell Suggs came up big with 2 sacks, 2 forced fumbles, 2 QB hurries and a defensed pass…Elvis Dumervil, welcome back! Doom had a key strip sack on the Bengals last possession, added another QB hurry and he recovered an Andy Dalton fumble following a premature snap…Matt Judon was clutch with 2 fourth quarter bat downs at the LOS…The Ravens defense limited the Bengals to 5 of 16 (31.3%) on 3rd down attempts and 1 of 5 attempts (20%) in the red zone. On the season the Bengals were 37.2% and 56.7% in those categories, respectively, leading into the game.

Devin Hester woke up and nearly broke one punt return for a score if not for a shoe string tackle. He averaged 16.3 yards on 3 punt returns…Sam Koch netted 42.2 yards on 5 punts including 4 inside the twenty, two were downed at the 7 and a third at the 14…Heads up call from the Ravens coaching staff on the game’s final play, instructing the blockers on the punt team to blatantly hold to allow the game clock to run out as Koch hovered in the end zone. It was reminiscent of a scene from the movie The Longest Yard. And of course it reminded all Ravens fans of the waning moments in Super Bowl 47.

The Ravens failed to find a way to protect the A-Gap and free Bengals blitzers often stymied Marty Mornhinweg’s waggles. The coordinator, his quarterback and receivers need to get on the same page with pre-snap adjustments in order to exploit the areas vacated by the Mike LB. It might also help if they run more frequently from under center. The run plays when operating from shotgun look out of synch and offer little deception, primarily because Flacco’s deliberate execution is akin to a pitcher tipping his changeup… Wallace is still looking for the well-place back shoulder throw from Flacco at the 30-second mark of the second quarter from the Bengals 41…The Ravens third-down offense matched the ineptness of their opponent’s, going 5 for 16…Dennis Pitta’s shabby blocking reared its ugly head again…Steve Smith, Sr. had 2 penalties for 25 yards. There’s a difference between being a fiery competitor and being stupid. This has happened in consecutive weeks.

Eric Weddle dropped an easy interception and the Bengals accepted his generosity and converted it into 3 points. Weddle also was an ineffective blitzer and committed a personal foul (helmet-to-helmet on Tyler Eifert) that cost 15 yards…To his credit Dean Pees dialed up blitz packages regularly but his unit disguised them poorly and were oftentimes ineffective…Kick coverage teams could use improvement…Lots of empty seats at The Bank on Sunday. If the decline in attendance continues the Ravens might have to drop the “&” from the name on the stadium. 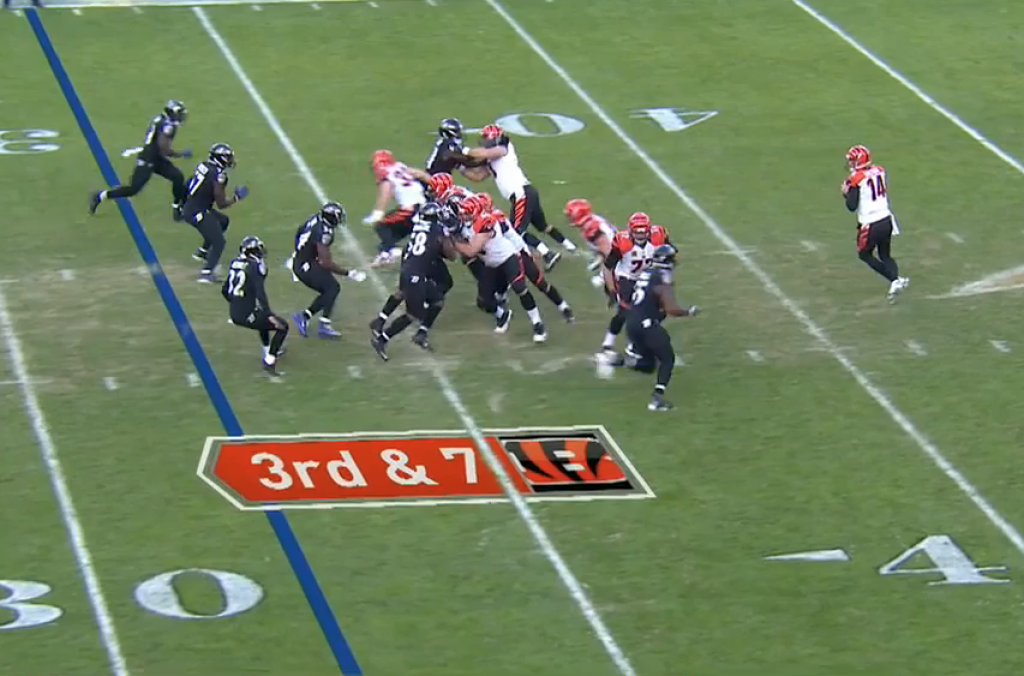 Ravens fail to get to Andy Dalton despite rushing 8 men at the 5:47 mark of the 3rd quarter.

The Ravens produced just 101 yards of offense in the second half while scoring just 3 points. They were 0 for 6 on third down and it was the fifth time this season that the Ravens failed to score a second half touchdown…After their second possession ended at the 5:44 mark of the first quarter the Ravens ran just 1 offensive play in the red zone, that from the Bengals 19. Let’s just admit that this is a putrid, highly predictable, poorly engineered offense that lacks accountability and the ability to adjust. If you remove the two games against the winless Browns, the Ravens are averaging 7 points in the second half during the remaining nine games and that includes a 21-point explosion against the Raiders.…The Ravens were penalized 8 times for 69 yards (6/49 in the second half) compared to the Bengals 2 for 15 for the entire game.

He’s the first kicker in NFL history to kick three 50+ yard field goals in the first half of a game. He finished 4 for 4 on the day with 13 of the Ravens 19 points and he’s now a perfect 27 for 27 on the season PLUS he has connected 7 times from 50 yards and beyond. Justin Tucker, YOU ARE RIDICULOUS!

I did a Google search for “automatic” and this picture came up… pic.twitter.com/FfTNN3tNhB