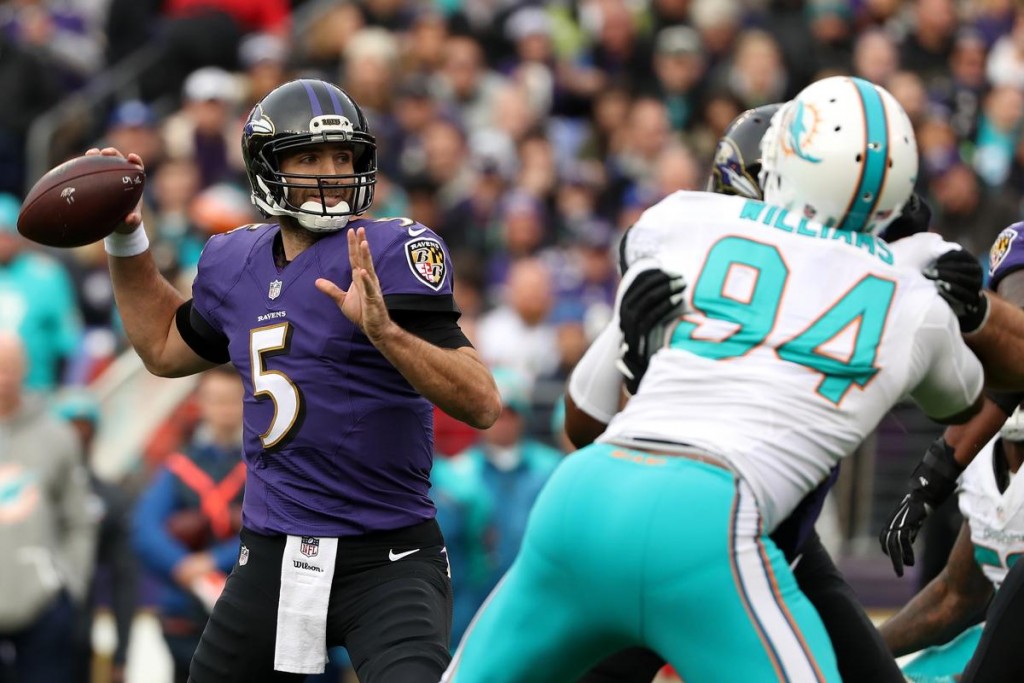 For weeks, months, perhaps seasons, even the most casual observers of the Baltimore Ravens could tell you that Joe Flacco is at his best when the game is simplified and when the pace is up-tempo.

Flacco has always been a rhythmic quarterback, even dating back to his days as a Delaware Blue Hen. Yet coordinator after coordinator seemed reluctant to unleash the big-armed gunslinger. Perhaps in doing so they could control the offense, run it their way, when all along the best way has always been to run it Joe’s way.

“Football is football. I mean, come on guys, we’re talking about a bunch of football players. It’s not tough to learn an offense. At the end of the day, you have a formation, you have protection, you have a direction to run the ball and you have a route to run as a receiver. It’s not that tough. If you can’t learn an NFL offense, then obviously you shouldn’t be there. … I’m saying, we’re not the brightest people, so therefore how hard can an NFL offense be?” ~ Joe Flacco

Following the Ravens win over the Bengals, Flacco lamented about not keeping the pace up after a successful opening drive when they employed the no-huddle approach. They let the collective pedal off the metal and in doing so the Ravens let the Bengals back in the game. Flacco insinuated that the Ravens got too conservative, a description that didn’t set well with Offensive Coordinator Marty Mornhinweg.

According to The Sun’s Jeff Zrebiec, the two had a heated exchange over the insinuation.

Judging from yesterday’s effort, the exchange was well worth it and the two grew from the experience. Let’s hope they build upon it going forward.

Although surprisingly limited in attempts, the Ravens running attack was productive but arguably underutilized – although it’s hard to find fault with an offensive attack that averaged 7.1 yards per play on 70 plays (496 net yards). Kenneth Dixon had 56 yards on 6 carries (9.3 YPC) and Terrance West had 50 on 10 carries. West also added 2 scores, one on a 3-yard swing pass to cap the opening drive and another to finish the afternoon’s scoring with a 9-yard scamper around the right edge…Dennis Pitta found holes behind the Dolphins linebackers regularly and finished his best day in years with 9 catches for 90 yards and 2 scores. He had a very nice 27-yard reception called back when Vlad Ducasse was flagged for holding…The explosiveness of Breshad Perriman is certainly coming to the surface. He scored his third TD in the last four games…Kamar Aiken converted some key third downs…Nick Boyle continues to show why he’s better than the more heralded Maxx Williams demonstrating sure-handedness as a pass catcher and ruggedness as a blocker…The offensive line was stout, keeping Flacco clean on 47 drop backs. He wasn’t sacked and they surrendered just 2 hurries despite taking on a couple of intimidating forces in the forms of Ndamukong Suh and Cameron Wake.

The Ravens offense improved on third-down converting 5 of 11 attempts against the NFL’s best third-down defense. They were also a perfect 4 for 4 in the red zone. Give Mornhinweg and Flacco credit for distributing the ball very effectively. Ten Ravens caught passes on Sunday.

Tavon Young has had a fantastic rookie campaign and against the Dolphins he was on point again. His assignments were targeted 3 times and he surrendered two completions for 4 yards. He batted down a key pass intended for Jarvis Landry during the Dolphins first possession that forced Miami into a 46-yard FGA that ultimately fell wide left…Lardarius Webb’s interception in the end zone on a pass intended for DeVante Parker was a big momentum shifter. He showed great closing speed while providing over-the-top assistance to Jerraud Powers…Zach Orr is a tackling machine! He added 13 to his seasonal total, a few at or behind the LOS…Brent Urban made the most of his 9 snaps contributing a sack and 2 QB hurries…The Ravens third-down D surrendered first downs just four times in 13 Dolphins’ attempts. 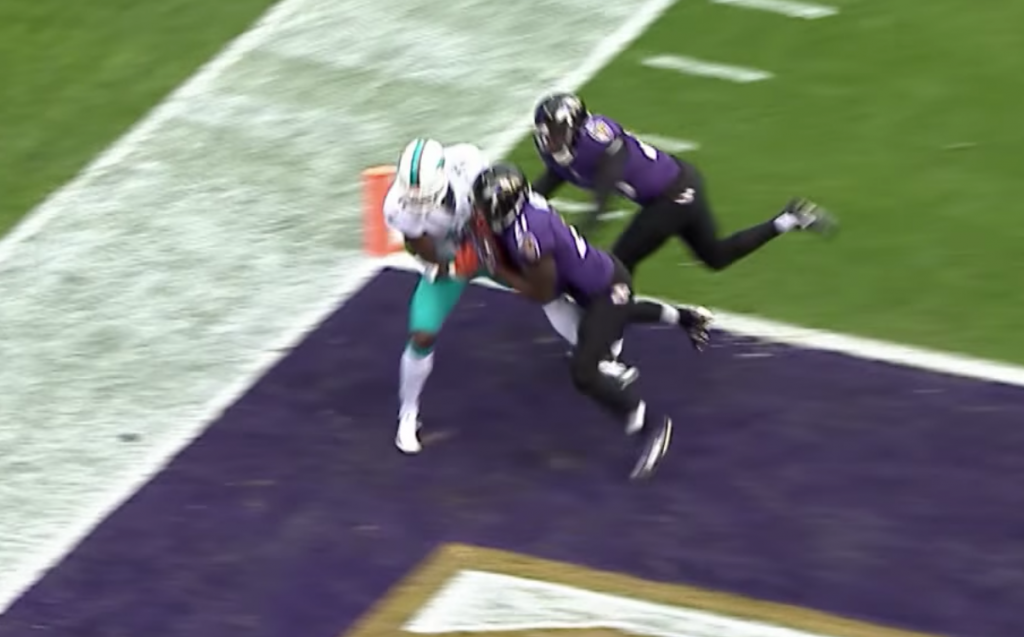 It’s pretty amazing when you actually expect a kicker to convert on a 55-yard field goal attempt. That’s Justin Tucker who extended his perfect season to 28 straight FGA’s and 8 for 8 from 50+…Props to John Harbaugh and Mornhinweg for keeping the pressure on the Dolphins defense with two fourth down conversions and relentlessly attacking a porous and seemingly tired defense. For once the Ravens collectively went for the jugular and didn’t allow a nearly beaten team to get back off the deck…Added props to Mornhinweg for spotting a weakness in the Dolphins defense that the Ravens clearly took advantage of. The inside backers and safeties of the Phish apparently looked like a soft white underbelly that the Ravens carved easily. It was probably tempting to feed the ball often to West and Dixon given Miami’s 30th ranked run defense – and that may have worked. But Marty’s plan was better.

The miscommunication between Flacco and Mike Wallace leading to an interception one play after the great pick by Webb. Flacco probably threw the ball in a bad spot but Wallace needed to make a better play on the ball to help bail out his scrambling quarterback. The better throw would have been a looped pass over the first defender and towards the sideline to at worst, live for another down…He’s a rugged runner and among the league leaders in yards after contact but the Ravens defense at times struggled to wrap up the elusive Jay Ajayi…Kamalai Correa among the inactives again…The experts told us that the M&T Bank turf would hold up in December despite being below sea level, given new technology now available. The jury is still out. Many players slipped yesterday but fortunately most of the slips belonged to the Dolphins. 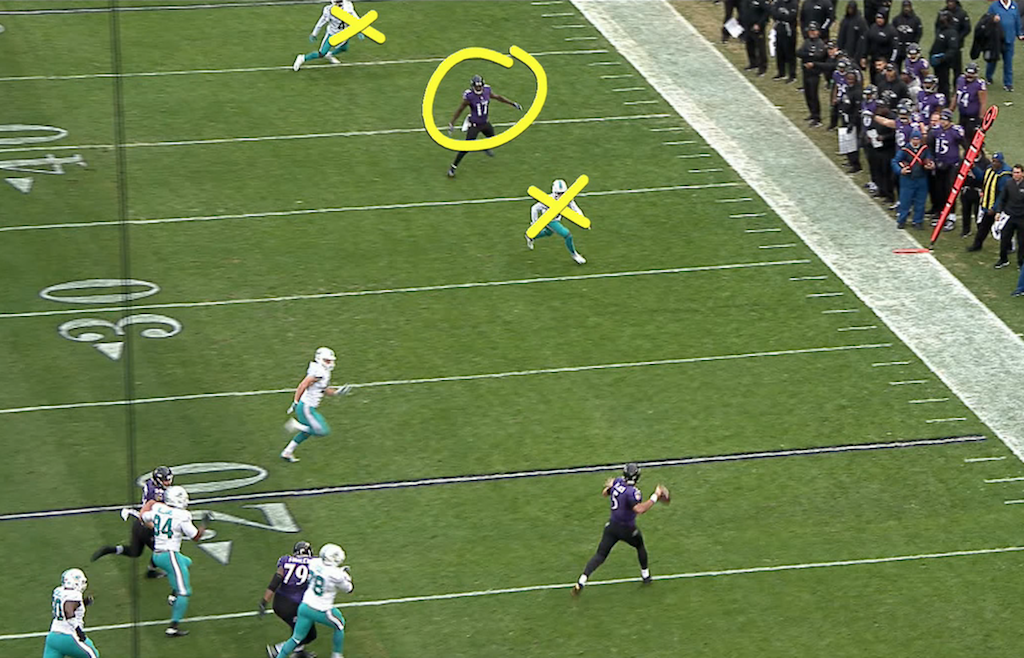 Tim Jernigan is an emotional player – I get it. But there’s a difference between being emotional and stupid and the latter certainly describes his taunting penalty that temporarily gave a Dolphins first quarter drive new life. He was ultimately bailed out by Webb’s pick…Vlad Ducasse was flagged twice and the Ravens as a team were flagged 7 times for 68 yards. The good news (I suppose) is that they relinquished second place in penalties accepted, thanks to the Eagles who were found guilty 10 times during their loss in Cincinnati.

Is there any doubt?

This was the Joe Flacco we witnessed during his amazing playoff run at the back end of the 2012 season. This is the player who is capable of shredding defenses when allowed to do what he’s most comfortable doing – playing street ball. Joe spread the ball, read through his progressions, showed decisiveness, had great rhythm and he got the ball out quickly, negating the effectiveness of the Dolphins formidable pass rushers. On the day Flacco was 36 of 47 for 381 yards, 4 scores and a passer rating of 119.2.

Now how about a little more of that?