How Does it Affect Juan Castillo?

When John Harbaugh was hired as the Ravens head coach in 2008, he hired Andy Moeller to be an assistant offensive line coach. The connectivity to Harbaugh was through the University of Michigan.

In 2011 Harbaugh fired highly regarded offensive line coach John Matsko and promoted Moeller into the position. Matsko has since held the same position in Carolina with the Panthers following his departure from Baltimore. Moeller is now out of football in large part, due to some recurring off-the-field issues. That said Moeller was the Ravens O-Line coach during their Super Bowl 47 season, and he was popular with the players.

In 2013, Harbaugh decided to pair Moeller up with a former colleague from Philly who was jettisoned from the Eagles in 2012. Of course I’m talking about Juan Castillo who was named the Run Game Coordinator in January of 2013.

Rumors surfaced that there was discord between Moeller and Castillo, and that certain players had issues with the new Run Game Coordinator as well. The results of the run game in 2013 reflected the alleged discord as the Ravens finished 28th in rushing TD’s (7), 30th in yards per game (83) and 32nd in yards per carry (3.1).

Harbaugh admitted the mistake during the State of the Ravens presser in 2014 and said that all along it was his intent to allow Castillo to function as the offensive line coach. You can read his full response below.

Fast forward to today when it was announced by NFL.com that the Ravens have agreed to terms with Greg Roman. He will become Senior Offensive Assistant and Tight Ends Coach.

At the end of the day the title doesn’t really matter. What does matter is where in the pecking order Roman and Castillo sit as the Ravens try to fix their rushing attack.

Roman was once an offensive line assistant under Brian Billick here in Baltimore from 2006-07. Later he would go on to San Francisco where he put together a very impressive rushing attack that was among the league leaders throughout his four-year stint with Jim Harbaugh. Roman later served as an assistant to Rex Ryan in 2015-16 and contributed to the league’s top-ranked running game in both of his seasons in Buffalo. 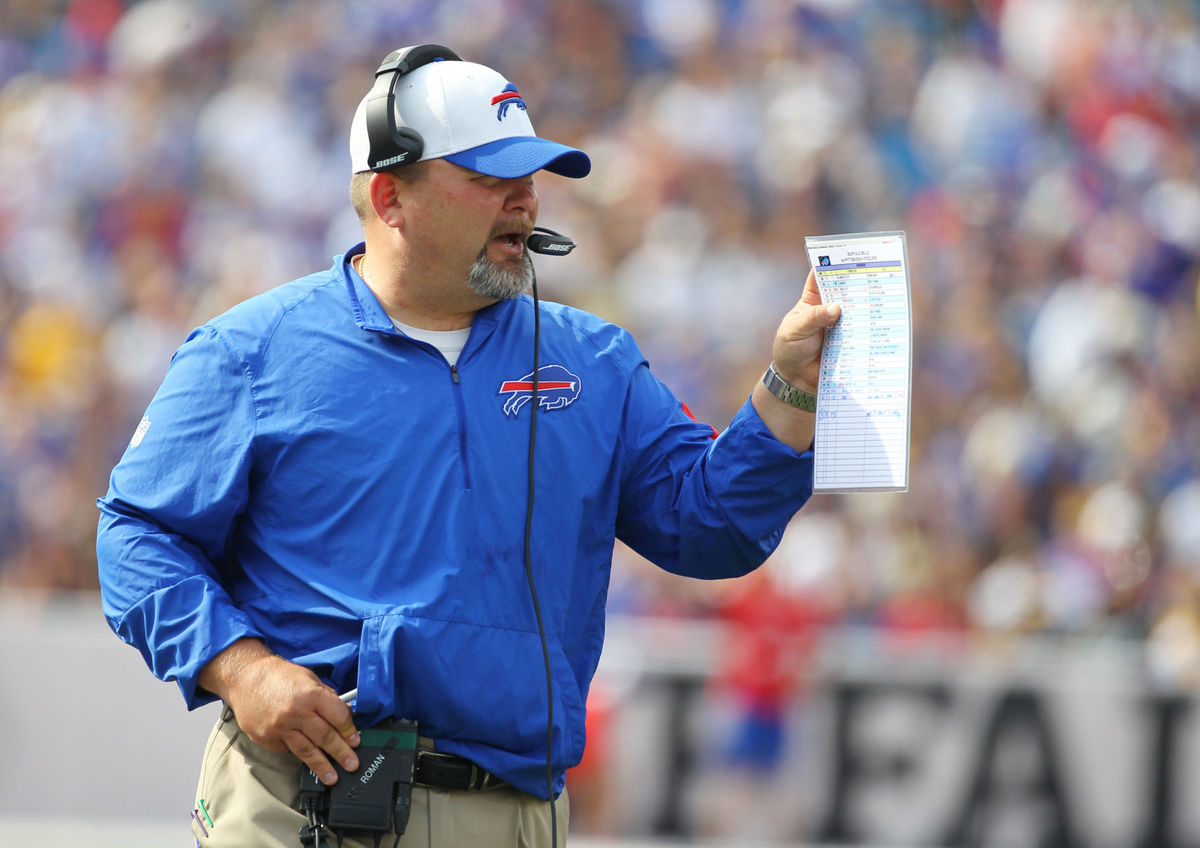 Clearly Roman’s resume is impressive and maybe he’s being stashed as a potential replacement for Marty Mornhinweg if things nose-dive for the Ravens OC, much like Leslie Frazier seems primed to grab the reins from defensive coordinator Dean Pees if he fails early in 2017.

But is Castillo really necessary?

Didn’t Harbaugh learn from the mess he made in 2013?

Might this be one of those situations when Harbaugh concludes that less is more?

Or will Harbaugh again be loyal to a fault at the expense of the Ravens?

Time will tell but make no mistake about it, the hiring of Roman is an excellent one and could prove to be as equally as effective as the 2014 hiring of Gary Kubiak.

Provided of course that Castillo doesn’t get in the way.

From the 2014 State of the Ravens presser…

John, you kind of mentioned last week how we are the conduit for the fans. There has been no greater name since the end of the season than Juan Castillo. Would you be willing to shed some light on what exactly he did this year, how his job was different than Andy Moeller’s, and if you will come back next year with the same structure of what most people perceive to be two offensive line coaches – the same structure of him as run game coordinator and Andy Moeller? (Steve Davis)

(JOHN HARBAUGH) “That’s a good question, thanks. I can understand why Juan [Castillo] is a lightning rod right now because of the way that was set up and structured. Then, we go into the season, and we have our worst year ever running the ball, and he’s got that [run game coordinator] title. So, that’s on me. When we hired Juan, and we added Juan and had a chance to add Juan last year, the idea was to add another great coach into our mix. Juan functioned as the lead offensive line coach last year; that was his job. The title was a way to have three great offensive line coaches in our mix right there. Andy [Moeller] had a big contribution last year, was a little bit different than he had the year before. It wasn’t the same as he had when he was with John Matsko.

So, we had three guys working together, and I thought it was going to be a really good mix. And, I thought those guys did a really good job of coaching together. We didn’t get the result we wanted to get. But, Juan was the offensive line coach. And the titles going forward – and that’s one of the things that Ozzie and I talked a lot about, and I talked a lot with Juan about this and talked with Andy about this – Juan’s title is going to be the ‘offensive line coach.’ That’s the way he worked last year; he worked as an offensive line coach. The offensive line coach works the run schemes and the pass protection schemes. He is pretty much out front and leads on that, but the offensive coordinator is in charge of the offense. He organizes the offense and decides exactly how we’re going to do the details of that. Then, I’m on top of that, and I make all the final decisions as far as what direction we go and how we do it. So, it really didn’t function any differently last year than it had the year before or the four years before that, and that’s the way it worked.

But, that’s the fine line of the National Football League. That’s what makes the league so great – what we’re talking about. That is why it’s so exciting and so competitive. But, we’ve got to find a way as a coaching staff to get the very most out of the players that we have, and that’s what I’m working on right now, along with Ozzie and Steve and Dick and our coaching staff. Let’s set this thing up as well as we possibly can with our staff, working together, utilizing everybody’s strengths, balancing our weaknesses with a lot of great coaches, and building schemes that are going to make us the best we can be next year. And that’s what we’re going to try to do. So, Juan will be the offensive line coach next year.

The rest of it is a little bit in flux right now. We’re two weeks earlier to this probably – two, three, four weeks even – than we have been in the past. We’ve been coaching football games at this point in time. So, as all this NFL coaching drama goes on, some of our guys are involved in that, and we’ll just have to see how it shakes out. But, we’re going to build a great coaching staff again this year.”