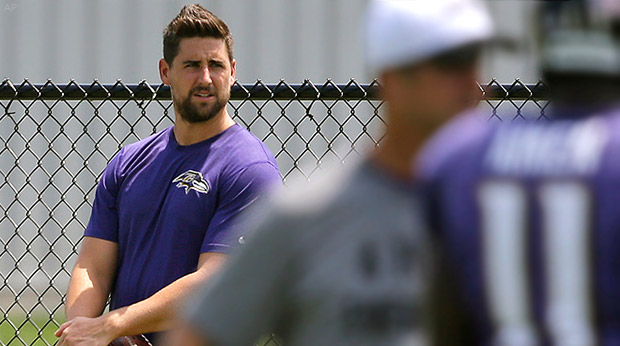 Earlier this week, Mike Garafolo of the NFL Network tweeted about the future of Dennis Pitta, which has brought up a lot of questions:

Do you think the Ravens and Dennis Pitta will be able to work out another paycut to keep him in Baltimore?

ANSWER:  As they say, “the devil is in the details” and in this case that means the structure of any incentives that would come along with a paycut.

Last offseason, Pitta agreed to reduce his base salary from $5M to $1M, thereby creating $4M in Cap space for the Ravens.  This was accomplished through the use of Not Likely To Be Earned Incentives (NLTBE) that allowed Pitta to earn back some of what he gave up if he was healthy and performed. Since NLTBE don’t count against the present year’s Cap, this maneuver lowered Pitta’s Cap number, but if earned, NLTBE incentives do count against the following year’s Cap.

In Pitta’s case, since he did earn the $3M worth of incentives, the $3M will count as a negative adjustment against the 2017 Cap. Since the delineation between Like To Be Earned Incentives (LTBE) – which do count against the present year’s Cap – and NLTBE Incentives – which again do not count against the present year’s Cap – is whether the thresholds were met in the prior season, it was easy to craft a paycut for Pitta last year since he didn’t play at all in 2015.

This year, though, is different, since Pitta played in all 16 games last year and set career highs in receptions and yards. That will make it much harder to craft incentives that will remaining NLTBE and thus reduce his Cap number. It will also make it harder find a middle ground on what both sides consider to be reasonable and what Pitta may feel is attainable, since to be earned they must essentially be greater than last year’s numbers. Now, incentives can be based on team stats too (wins, offensive rankings, etc.), so there are other ways of tying things together, but it’s still going to be a much harder proposition to find a middle ground.

If the Ravens do release him, when will they do so?

While others have reported that the Ravens would likely only use a post-June 1 designation if they did end up releasing Pitta, I’m not 100% sure of that. They very well may go post-June 1, but much of that decision will depend on what other moves they make to create Cap space – and how much. The downside to a post-June 1 release is that it pushes dead money onto the following year’s Cap and because of this, the Ravens have used post-June 1 releases sparingly in the past.

The argument made against releasing him prior to June 1 is that the team will take a $4.4M hit of dead money against this year’s Cap, but that ignores that they are going to have to account for that $4.4M one way or another. With $3.3M in Cap savings in 2017, it may be more worth it to wipe Pitta off the books now and not have any lingering dead money carried over into 2018 ($2.2M). Again, this is something the Ravens have tried to avoid in the past and if they are creating substantial Cap space otherwise, releasing Pitta prior to June 1 won’t hurt as much anyway.

Fans are often very fearful of dead money (especially Ravens fans after the Ray Rice issue), but teams realize that the dead money is a sunk cost already, so they are less worried about it than the fans are and every team is going to carry dead money, one way or another. It’s really just the cost of doing business and the reality is that all moves aren’t going to always work out as planned. The issue the team is looking at is not how much dead money is any given move going to make, but instead is how much Cap savings is involved and how much they need.

As some have pointed out, any Cap relief from a post-June 1 release isn’t realized until after June 1, but that’s not really an issue because as we’ve seen over the last couple of years, teams need additional money when the Rule of 51 Cap accounting ends (and all players start counting against the Cap) and for in-season injury replacements. So, the team can account for this and know that any post-June 1 savings can be budgeted to address those issues.

This issue also exists for two other potential Cap cuts who have contracts that continue beyond this year – Center Jeremy Zuttah and CB Shareece Wright – so it is possible that the team could do a post-June 1 release with one of them or Pitta, but that remains to be seen.

Regardless of the Cap implications, the biggest issue with Pitta is his $5.5M base salary.  Teams care about cash outlays too and short of a paycut, that base salary makes Pitta very vulnerable.

If the Ravens release Pitta, could be come back later?

ANSWER:  This is also a scenario that could play out if the Ravens and Pitta aren’t able to work out a deal (paycut, incentives) that is agreed to both sides. The Ravens could release him and if he doesn’t find any offers more to his liking, he and the Ravens could also revisit new contract terms later. The Ravens done this several times over the years, most recently with FB Vonta Leach and DE Chris Canty. Given Pitta’s significant injury history, you do have to wonder what kind of market would exist for him. Also, if re-signed later, the issue of incentives may be moot, since the market would have spoken and the need for incentives may no longer exist. At that point, it may be just a straight salary deal.

A big variable in such a scenario would be whether the Ravens retain their other aging TE, Ben Watson. If Watson is retained (and he is also a possible paycut candidate, perhaps, even a more desirable one), I can’t see the Ravens bringing Dennis Pitta back, especially with four other TEs already on the roster.  If Watson has also released, then there may be room for a possible Pitta reunion.