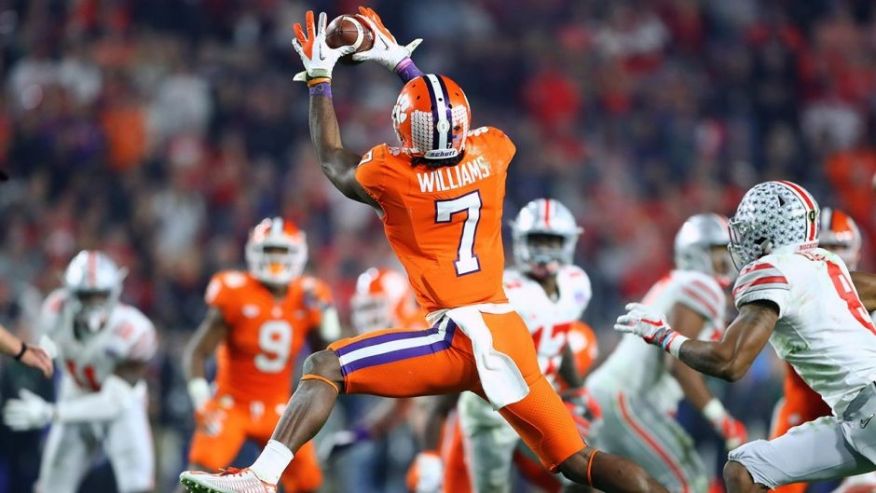 So far for the Baltimore Ravens during the offseason, things have been off to a hot start. They did not bite on overpriced contracts for the likes of Ricky Wagner and Kyle Juszczyk, and found value in the signings of Danny Woodhead, Tony Jefferson and Brandon Carr.

By all accounts, the first wave of free agency for the Ravens was a success. However there still is still a lot of work ahead on the offensive side of the ball.

Whether that can be achieved in one offseason remains to be seen, but at this point, the NFL Draft is shaping up to be the best bet for the Ravens to find Joe Flacco a new favorite target.

Granted, this feels like Groundhog Day more than anything. I mean, what Ravens offseason hasn’t been centered around finding a star receiver?

The Derrick Mason/Anquan Boldin/Smith Sr./Mike Wallace moves of the world can only sustain an offense for so long. Those additions get the Ravens by in the short term, but leave them in the same spot virtually every offseason: in search of new, young talent.

In this year’s draft, there is no shortage of options for the Ravens at wide receiver. There is the do-it-all type in Western Michigan’s Corey Davis, the speedy-but-risky John Ross and the “ideal round two value” types such as USC’s JuJu Smith-Schuster and East Carolina’s Zay Jones, among many others.

But which receiver fits the Ravens best?

We have seen the success that Flacco has had with the Boldin and Smith Sr. types – receivers who are physical enough to play 50/50 balls and win contested matchups.

No receiver in the draft exemplifies such a playing style quite like Williams, and what makes him even more intriguing is his towering 6’4 frame and long arms.

Fresh off a 98-catch 2016 season for the champion Clemson Tigers, Williams is the complete package at the wide receiver position, save for a lack of elite speed.

From size, to physicality, to consistency, Williams embodies all of the traits the Ravens need on offense. Having speedsters such as Wallace and Breshad Perriman is only sustainable with a complementary receiver who can win the tough matchups with length, strength to box out and high-point skills — all of which Williams brings to the table.

A common joke about Flacco is his tendency to “just toss it up to receivers” and essentially hope for the best. Yes, that may be the case at times, but it is only to receivers who have proved themselves as reliable targets in traffic.

The play above would be a classic example of an instance in which Flacco would be able to confidently lob a throw into traffic, banking on the elite ball skills and concentration of Williams.

Being able to stand out on the 50/50 plays helps, but overlooked positives such as the play above are what separates Williams from the pack. The post play looks simple, but the fact that the quarterback has the luxury of throwing the ball higher than normal due to the length of Williams makes for an easier pitch-and-catch.

Flacco has shown throughout his career that he can be efficient on quick-hitting post plays over the middle when he has a dependable target, and Williams would reopen that aspect of Baltimore’s offense.

Likewise, Williams has ample speed to make some impact on short-yardage throws.

Overall, however, the speed of Williams is average, but that is not where he wins as a receiver.

If Williams falls in the first round, allowing the Ravens to capitalize, it will be the early-first-round equivalent of the Jarvis Landry conundrum in 2014. Landry undoubtedly had the ball skills, physicality and consistency to succeed in the NFL, but his speed paled in comparison to his peers, leading to a drop to the second round.

Williams is unlikely falling out of the first round, but a more logical scenario is if he falls out of the top 10 due to lack of speed, which would give the Ravens a realistic chance at landing the highly touted prospect.

As long as Williams continues to make plays such as this, there is no reason he should not be on Baltimore’s radar.

Of the receivers in this year’s draft class, no player would address what the Ravens pass game is lacking quite like Williams. Plain and simple, Mike Williams fits!

Bringing in a well-built, 6’4 receiver with a wide catch radius and physical nature would be a new and welcomed addition to the passing attack, and it would not be a surprise to see Williams and Flacco connect from day one.

Now, will Williams still be available at 16?

Which of the following wide receivers projected to be first-round picks would you select if all were available for the Ravens at No. 16?