The Colts returned to Baltimore for the first time since the Irsay Brigade escaped to Indianapolis in the middle of the night on March 28, 1984. Those helmets, adorned with that horseshoe, a source of pride for a generation of fans in Baltimore, were worn by players on the visitors’ sideline. The setting was surreal.

The Colts offense had their way with the Ravens, as Peyton Manning and Marshal Faulk helped stake Indianapolis to a 24-10 lead with 46 seconds left in the first half. Yet somehow, led by Jim Harbaugh, the Ravens clawed their way back and eventually won the game 38-31 despite being outgained 540 yards to 314 and losing the battle of possession, 33:44 to 26:16.

But the day’s defining moment came as the clock ticked down and Jim Harbaugh handed the game ball to a surprised but certainly appreciative John Unitas who watched from the sideline. The warm and appropriate gesture was caught on the Jumbotron – a moment that is etched upon the minds of all who witnessed it. 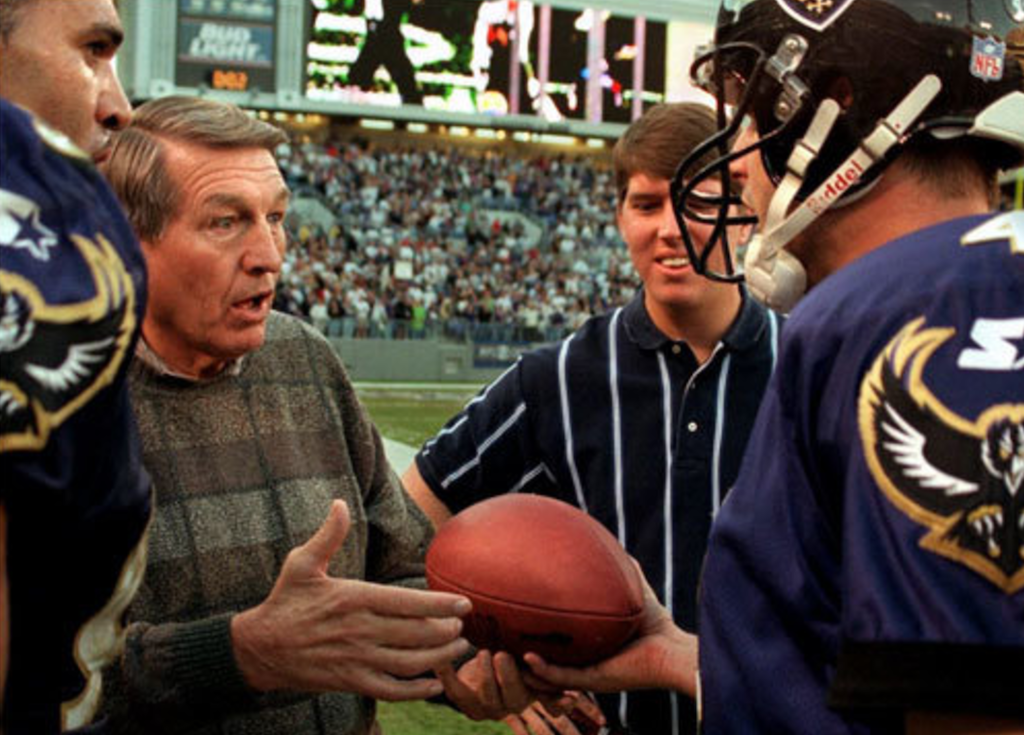 Just after 1 a.m., the day the Ravens were to host the Patriots on Sunday Night Football, Torrey Smith received the kind of phone call at the Ravens’ hotel that no one wants to hear. His 19-year old brother, Tevin Jones, had run his motorcycle into a tree and died. In honor of his brother, Smith decided to play the game and dedicate it to his memory.

In an attempt to strengthen Smith’s resolve, Ray Lewis addressed the team before the game. The message was intended for all, but specifically for Lewis’ heartbroken teammate.

“Before every blessing, there has to be a storm. We honor your brother just like he’s ours.”

Smith played his heart out and his 127 receiving yards and 2 touchdowns helped propel the Ravens to a 31-30 win. But the game’s defining moment came with the Ravens down 13-0 at the 9:50 mark of the second quarter. Then, Joe Flacco hit Smith with a 25-yard scoring strike. From his knee, Smith pointed skyward, towards Tevin, to inspire the team’s come from behind victory.

The (0-2) Ravens hosted the (3-0) Denver Broncos as 9-point home dogs on Monday Night Football. The rested hosts coming off an early bye, led 24-3 with one second left in the first half, as Jason Elam set up to attempt a 57-yard field goal. The attempt was wide left and fielded 7 yards deep by Chris McAlister. Initially McAlister hesitated but was encouraged to attempt a return by Ray Lewis. Lewis set up the return with a devastating block on Broncos’ LB Keith Burns as McAlister went coast to coast untouched to give the Ravens a 31-3 halftime lead.

The (6-4) Ravens hosted the (5-4-1) Eagles as 2-point favorites, marking the first time that rookie head coach John Harbaugh would face his former team. Leading 22-7 midway through the fourth quarter the Ravens attempted to defend their own end zone and thwart an Eagles comeback bid. At the 7:44 mark, Kevin Kolb dropped back to pass on second down from the Ravens 1-yard line. For a moment, it looked like he had Reggie Brown open at the back of the end zone. But Ed Reed lurked, read Kolb like a book and jumped the route. 107 yards later the Ravens led 29-7 and never looked back on their way to a 36-7 victory.

The Ravens were pasted a week earlier by their arch-rivals, the Pittsburgh Steelers at Heinz Field by the score of 34-15 – and it wasn’t even that close. Returning to Baltimore for their home opener, Jamal Lewis and Cleveland Browns linebacker Andra Davis did a little trash talking by phone prior to the game. Lewis predicted that he would break Corey Dillon’s single-game rushing record of 278 yards.

On the Ravens second play from scrimmage, Lewis burst through the line and went 82 yards for a score to set the tone for the day on his way to 295 yards rushing. If not for a very ticky-tacky holding call on Marcus Robinson, Lewis would have had another score and 22 more yards. But it all started with that statement play to back up the trash talking, just 42 seconds into the game.

Christmas Eve, the final regular season game – a season that ended with the franchise’s first playoff berth. The week before Jermaine Lewis missed the trip to Arizona for personal reasons. Prior to this game, at home against the Jets, we learned what those reasons were. Lewis lost his son Geronimo – stillborn. He stayed at home to mourn with his family.

Leading 20-17 with 6:19 to go in the third quarter, Lewis fielded a punt at his own 46. Fifty-four yards later he scampered into the end zone. The emotions were apparent through his body language and the sellout crowd that seemed connected to the gamut of emotions that raced through J-Lew’s veins. We felt his joy. We felt his sadness. Jermaine Lewis was family.

Lewis would cap his day and the Ravens scoring later that afternoon with an 89-yard punt return for a score.

The (3-0) Ravens faced off at home against the (2-0) Chargers, fresh off a bye. Despite the ultra-conservatism of head coach Marty Shottenheimer, the visitors controlled the game and the clock throughout most of the afternoon. With 3:31 left in the game and leading 13-7, the Chargers punted from their own 12-yard line. Punter Mike Scifres hit a bomb of a punt that traveled 55 yards, but the punt was negated by an illegal man downfield penalty. The Chargers were force to punt again, this time from their own 7-yard line. Shottenheimer took the conservative approach again and instead of risking a blocked punt, he opted to take a safety, making the game 13-9.

After the free kick the Ravens took over from their own 40 with 3:05 remaining. Three completions (2 to Mark Clayton for 30 yards) and a Steve McNair 12-yard scramble later, the Ravens faced a first and goal at the 10. One play later, McNair hit Todd Heap with 41 seconds to go to give the Ravens a 16-13 lead following the PAT.

The crowd erupted – arguably the loudest ovation ever at M&T Bank Stadium.

The day of the franchise’s first ever playoff game was brutally cold with a wind chill of 5 degrees and 20+ MPH winds. Consequently, it would not be a day for an effective passing game for either team.

Leading 7-3 with a little over 4 minutes left in the first half, the Ravens took over at their own 42 following a 31-yard field goal by Jason Elam. On first down, Trent Dilfer attempted a pass to Jamal Lewis in the right flat but the errant pass was well behind Lewis and caromed off his hands, past a defender and into the waiting arms of Shannon Sharpe. Fifty-eight yards and a great seal block from Patrick Johnson later, the Ravens led 14-3. With that defense, there was no denying the Ravens a shot at the Tennessee Titans in the Divisional round.

He had been with the franchise from Day 1. How fitting, almost poetic, that the last time Ray Lewis would play at M&T Bank Stadium would be in the playoffs against the team formerly known as the Baltimore Colts. Lewis had been sidelined for several weeks with a triceps injury but vowed to be ready for his final ride and his last dance.

He fulfilled that promise.

Ray wasn’t a big factor in the game – one that was taken over by Joe Flacco and Anquan Boldin. But it was the final time adoring fans would see Ray do his squirrel dance during player introductions. And to everyone’s surprise, he capped off the game the same way – his final snap in Baltimore, ironically taking place as a member of the offensive unit.

The Ravens closed the 1999 season showing promise. Their defense was on the verge of becoming one of the league’s best and after shutting out the Pittsburgh Steelers on the road to start the 2000 campaign, the Ravens wanted to prove that they were ready to handle a regular nemesis, the Jacksonville Jaguars.

The Tom Coughlin led team with the likes of Marc Brunell and Jimmy Smith, regularly put a hurting on the Ravens and up to this time, they were 8-0 v. Baltimore. The Ravens were determined to end that streak. But at halftime on this day, the Ravens found themselves way behind by the score of 23-7. Fans in the stands were frustrated and fully expected the Jags to extend their win streak against the Ravens to nine straight.

With their resolve tested, the Ravens chipped away at the Jaguars lead and eventually moved out in front 32-26 with 7 minutes remaining in the game. But following 10 unanswered points Jacksonville took the lead again with 1:45 left to go after a 40-yard TD pass from Brunell to Smith. Hearts appeared broken. But down 36-32, the Ravens rallied once again.

With QB Tony Banks at the controls, the Ravens moved the ball to the Jaguars 29-yard line with 0:48 to play. Facing a second and 10 following a spike to kill the clock, Banks hit Shannon Sharpe on a deep seam route down the hash marks for the winning touchdown. In many ways, it was a play that legitimized the Ravens and proved that they could be an up and coming force in what was then the AFC Central.