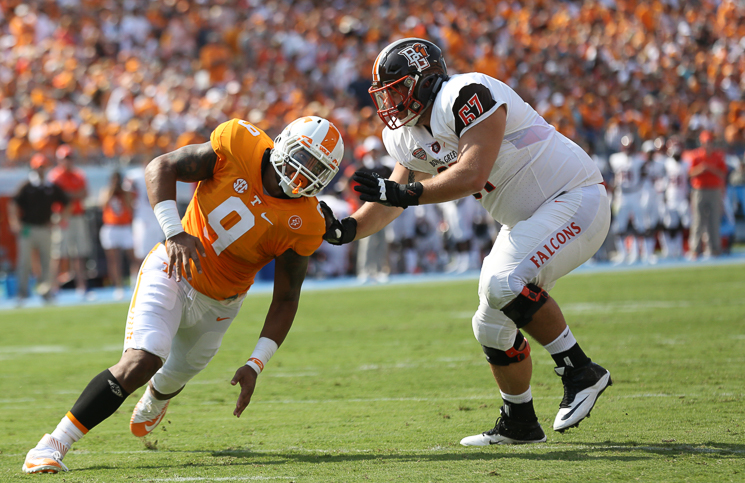 As next week’s NFL Draft nears, some prospects are starting to emerge as potential “logical fits” for the Baltimore Ravens, one of which being Tennessee defensive end Derek Barnett.

Entering the draft with quite frankly a glaring need for at least one edge rusher, it would not be a surprise to see the Ravens address the position at some point next week. But in a year with a deep edge-rushing class with no high-end talent after Texas A&M defensive end and proverbial first overall pick Myles Garrett, Barnett does not stand out from the pack as the next best edge rusher.

Quite frankly, Garrett may be the only pure edge rusher in this year’s draft class truly worthy of being selected in the top half of the first round.

Barnett has his major appeals, particularly his rather excessive production in three years at Tennessee, which included 32 sacks and 52 tackles for loss. His age is also worth noting, as Barnett enters the draft at 20 years of age, turning 21 on June 25, which means he likely has not tapped into his full potential yet.

But on the flip side, and this is why he has been compared to Terrell Suggs before, Barnett is not a great athlete. In fact, for edge rusher standards, Barnett could be classified as a below average athlete.

Being compared most favorably as an athlete to the likes of Jeremiah Attaochu and Dee Ford is not ideal for a pass rusher, especially one considered to be a potential top-15 pick in the draft.

Oftentimes we get caught up in numbers too much with prospects, but with certain positions, they matter. One of those positions is pass rusher. Put plain and simple: the time a pass rusher has to get to the quarterback is minimal, and a below average athlete is often at a disadvantage from the start.

We can compare edge rushers with high production but lacking athletic ability to Suggs, but keep in mind that Suggs is the exception, not the rule.

Let’s take a look at Barnett’s production at Tennesee, and what stands out as well as where his subpar athleticism and size (6’3, 32 1/8″ arms) can backfire.

One attribute that a successful edge rusher needs, which Barnett lacks, is speed and burst around the edge.

As a defender who does not blast out of the gates off the snap, Barnett has to make up for any lost time with quickness and agility to achieve the shortest path to the quarterback. However, he takes wide angles around the edge and does not get ideal leverage under the offensive tackle, often leading to little success.

The NFL’s premier pass rushers can win with speed and strength, but more importantly agility and balance. Not to compare Barnett’s NFL expectations to Denver Broncos pass rusher Von Miller, but as an example, Miller is one of the best in the league at bending his hips and ankles around the edge while maintaing balance in order to gain leverage. This prevents Miller from simply getting pushed into the dirt en route to the quarterback.

Where Barnett wins, however, is with strength and instincts in confined spaces.

Barnett is far from the strongest defender, but he often looks the part with natural physicality and an aggressive playing style. A player does not achieve 52 tackles for loss in three seasons without a natural knack for finding the football.

Likewise, when Barnett attacks the inside lane and resorts to his relentless, physical playing style as a pass rusher, he often wins.

Barnett’s best bet for success is to continue to hone in his craft in this regard to stay afloat. But given his relatively limited athletic prowess, he likely has a low ceiling on developing his bend-around-the-edge ability.

Based on Barnett’s scheme and playing style, his best best is the find a home on a 4-3 defense as a strong side defensive end, which is far from Baltimore’s schematic preference.

If the Ravens were to select Barnett at 16, it would be a classic case of trying to hit a double in the first round, as opposed to risking for a home run and potentially striking out. Given Barnett’s impressive college production, physical play, experience and room for growth given his age, it would be a surprise to if Barnett becomes a complete bust as a first-round pick.

On the flip side, Barnett’s ceiling is much lower than other top defensive prospects in this year’s draft. He may max out as a pass rusher who averages a handful of tackles for loss each year and anywhere between five and eight sacks in the right defense, which is good but not necessarily 16th overall pick good. With Baltimore’s hybrid 3-4 defense, Barnett could struggle to find a home as a pass rusher.

While an overall intriguing prospect, Derek Barnett is not be an ideal selection for the Ravens with the 16th overall pick in the 2017 NFL Draft.

If the Ravens land Tennessee Edge Rusher Derek Barnett with the 16th pick I will: