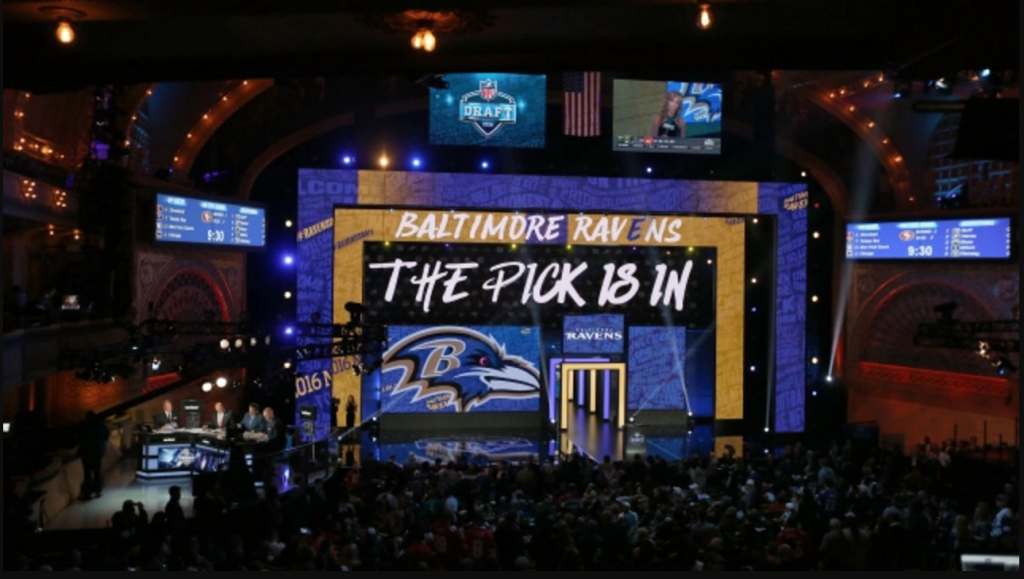 The Ravens 2017 NFL Draft is in the books and the team has added 7 players to their roster as part of an effort to improve upon the 2016 season. So how did they do?

Before I jump in to share my thoughts, it’s important to acknowledge two things:

1. The Ravens front office and coaching staff have individually and collectively forgotten more about football than most of us will ever know. They are paid professionals who have eaten, breathed and slept on this stuff for decades. That’s just the way it is;

2. Grading drafts immediately after they take place is borderline silly and definitely sits in a neighborhood called Premature. It takes a good two full seasons to marinate a rookie class before accurately assessing it. But I’ll do it anyway, in a knee-jerk sort of way.

The Ravens tried to trade up in the first round and the apple of their eye was the talented and versatile Haason Reddick from Temple. When that didn’t happen, the guess here is that some mild panic set in.

There were three other players the Ravens coveted but they couldn’t get comfortable with any of them. Ohio State cornerback Gareon Conley is connected to a rape case and while the talented former Buckeye could be exonerated, domestic violence and or sexual assault situations for the Ravens are about as endearing as the sunrise to a vampire.

Next up was Alabama LB Reuben Foster. From what I can gather, the team could’ve overlooked the diluted urine sample which qualified as a positive drug test, but they could not get past Foster’s shoulder issues. Same for Alabama defensive lineman Jonathan Allen. Allen was projected to go as high as No. 2 overall but dropped like a pay phone stock. When that happens, it’s usually a sign that the player has a previously undisclosed injury or an off the field issue. Allen has issues with both shoulders.

The next best player on the Ravens’ board was Humphrey. You can’t fault the team for staying true to a board they spent nearly a year building. You can question the board though.

Humphrey is a solid player – a lengthy corner with an ideal catch radius who is physical, supports the run and can blow up a bubble screen, something divisional rivals the Bengals and Steelers employ often. The knock on Humphrey is that he struggles to find a ball in flight and gives up big plays. That’s NOT ideal in a division that has A.J. Green, Antonio Brown and now John Ross. Some have argued that Humphrey can help counter Cincinnati’s acquisition of Ross, but the former ‘Bama corner’s skill set isn’t ideally suited to neutralize a speedy player with outstanding change of direction skills.

Besides, it could be argued that Humphrey won’t even be a starter at the beginning of the season and one of the objectives heading into this draft for the Ravens, was to find playmakers and a first-round pick who will start from Day 1.

Alabama tight end O.J. Howard is such a player. He could’ve made an impact from jump street. He is a physical freak who is a matchup nightmare for safeties and linebackers given his size (6’6”) and speed (4.5 – 40). The Ravens could have waited on a corner in this corner-rich draft.

Given all of the pre-draft chatter about finding support for Joe Flacco and the Ravens offense, it was borderline shocking to see Ozzie Newsome go with four consecutive defenders to start the 2017 NFL Draft. But they deserve credit for remaining true to their board and not feeling pressure that can inspire a reach or two for need.

Bowser is a less refined version of Reddick who the team targeted in Round 1. He has athleticism and a burst off the edge that the team is sorely missing. He graded out as the third best pass rusher in the nation during the fourth quarter of games. Clearly that’s something the Ravens need given the many leads the defense has relinquished over the past few seasons.

After the Bowser pick one source has shared that the Ravens zeroed in on both WRs Juju Smith-Schuster and Cooper Kupp. But both came off the board before the Ravens at pick No. 74 with the 62nd and 69th picks, respectively. The board then pointed them towards Wormley.

Wormley is a player who immediately pulls up the slack for the losses of Lawrence Guy and Tim Jernigan. He’s a 3-down player who can hold down the edge on first down and slide inside to help push the pocket on passing downs.

Williams is explosive off the edge. He has first-round talent and the assumed risk given his character issues was warranted with the 78th pick. The Ravens biggest investment this offseason has been on defense. The Ravens not only continued to make investments on behalf of DC Dean Pees, they protected their offseason investments in the secondary (Jefferson, Carr, Webb) by gifting them with a back-end defender’s best friend – a pass rush.

With job openings at Center and Right Tackle, the Ravens needed to find reinforcements for their offensive line. Offensive Assistant Greg Roman was hired to breathe new life into the team’s running game. Siragusa is a powerful road grader and was one of the country’s best run blockers last season. He’s a great fit for Roman’s style. There’s a decent chance that Siragusa is the Day 1 starter with Alex Lewis bumping out to Right Tackle.

Eluemunor has excellent size and athleticism. He’s raw and far from a finished product. NFL Network’s Mike Mayock gave a late third-round grade to the Aggie after discussing the native Brit with Texas A&M’s reputable O-Line Coach Jim Turner. Eluemunor is unlikely to contribute much in 2017.

The Ravens lost a big special teams contributor when Kyle Juszczyk moved to San Francisco. The selection of Chuck Clark has Special Teams Coordinator Jerry Rosburg’s fingerprints all over it and is proof that John Harbaugh’s BFF wields some influence in the Ravens war room. With so many kickoffs resulting in touchbacks and so many punts resulting in fair catches or knocked out of bounds via directional punting, a player like this could be acquired through the rookie free agent process. This seems like a mild reach with the second pick in Round 6. The team may have been better off taking a flyer on a RB or WR here.

The Ravens still need a center and they’ll probably sign an undrafted free agent to take a shot at the job. But that won’t be good enough. The guess here is that Nick Mangold is waiting in the wings and the team has delayed his signing so as not to discourage a rookie free agent Center from signing with the Ravens…Without the addition of a wide receiver via the draft, look for the Ravens to add a veteran receiver to complement the outside speed of Messrs. Wallace, Perriman and Moore. Ozzie Newsome will wait for some fall out from other rosters or he could proactively pursue a trade. Keep in mind it was a trade that brought Anquan Boldin to Baltimore in 2010.