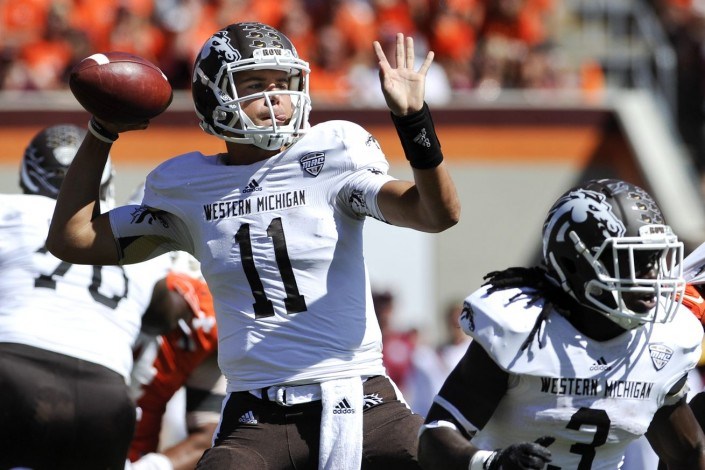 The Ravens have a history of finding and developing undrafted free agents. For the last 12 seasons an UDFA has made the team, the best of which include Mike Flynn, Priest Holmes, Bart Scott, Dannell Ellerbe, Zach Orr, Michael Pierce and of course Justin Tucker.

Here’s a list of such players who have at the very least made verbal commitments to the Baltimore Ravens.

Plus accuracy on short and intermediate throws. Throws with good ball placement. Gives Corey Davis every chance to make a play on deep balls. Is not prone to considering dangerous throws. Stays within himself and accentuates his strength. Has toughness to take the big shot and come back to make plays.

Could be written off as a viable NFL prospect due to a lack of size and arm strength, but his accuracy, toughness and production should get him into an NFL camp. If Terrell can impress with his consistency and decision-making, he might be able to fight for a third quarterback spot in the future. ~ Lance Zierlein, via NFL.com

Shifty outside zone fit who played in a pro-style rushing attack in 2015. Mizzell runs with plus vision and plays with the desired pace and wiggle of a runner looking to exploit fluid running lanes along the perimeter. He is undersized as an early down back, but might be able to find work as a change-of-pace runner with good elusiveness and an ability to make plays out of the backfield as a pass catcher.

Ricky Ortiz is a versatile athlete who has played full back, tight end, H-back and linebacker for the Beavers throughout his career in Corvallis. Ricky Ortiz had an impressive performance at Oregon State’s Pro Day and caught the attention of the Baltimore Ravens.

Ortiz is considered a fullback by most NFL scouts, but showed off his receiving ability at the Beavers Pro Day. Perhaps his most valuable strength will be his special teams abilities and experience. ~ BuildingTheDam.com

With a frame that should be able to add more muscle, Adeboyejo could be considered a Day 3 height-weight-speed flyer based on his ability to attack down the field. He is raw and is currently lacking the skill level needed to compete for NFL playing time, but has intriguing potential as a field stretcher or big vertical slot receiver. – Lance Zierlein, via NFL.com

It was Board’s pro day on March 30 that turned several teams around. After receiving little interest before the new year, Board’s workout in front of 18 NFL teams last month caused a stir. He ran a blistering 40-yard dash time of 4.38 seconds. ~ The Leaf-Chronicle 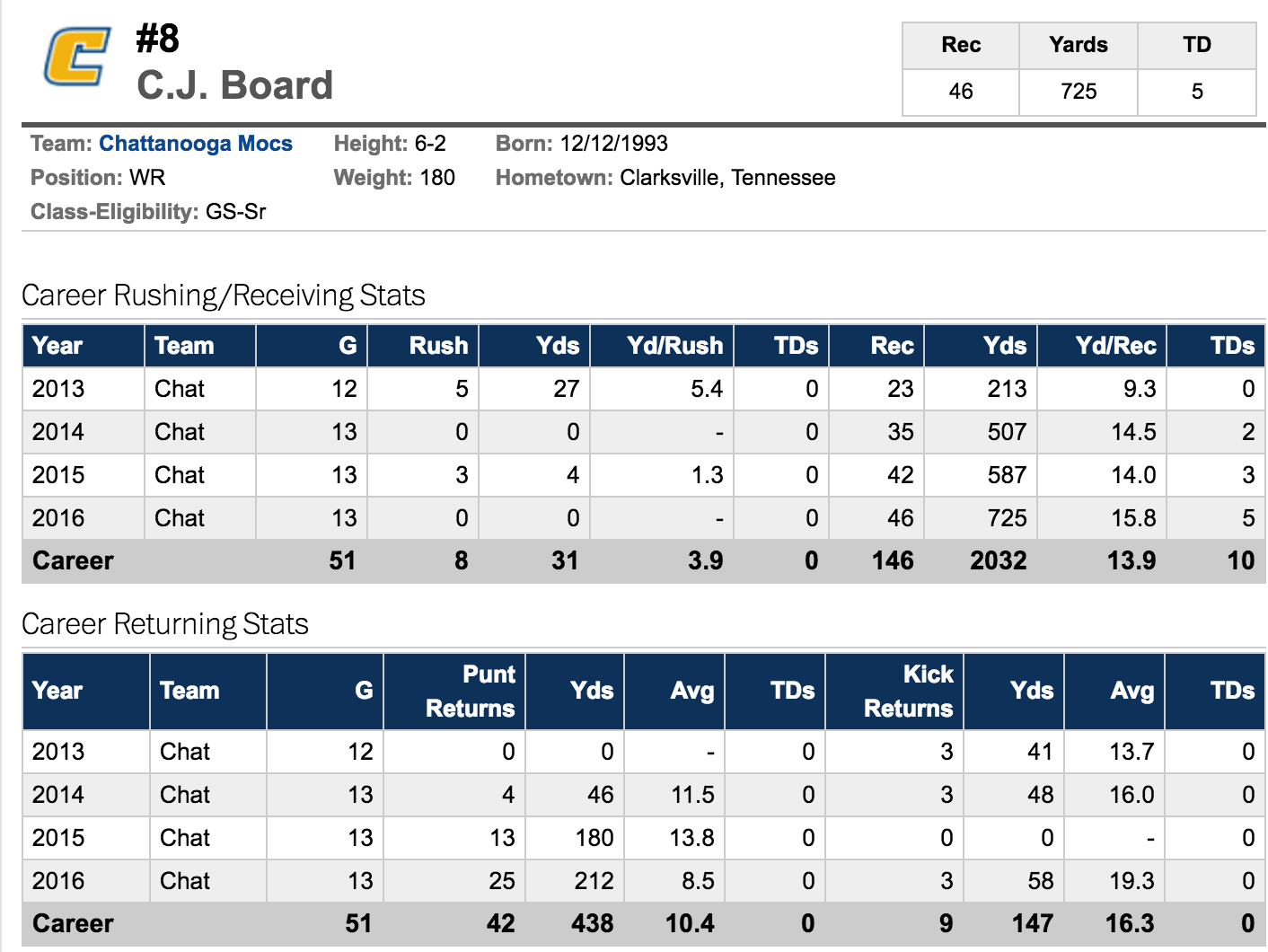 Offers up a quality ratio of size, speed and quickness. Long-strider who can eat into cushion on vertical routes. Plays with consistent level of confidence. Showed off his competitive nature and held his own against four cornerbacks who should go in the first two days in Kevin King, Sidney Jones (Washington), Adoree Jackson (USC) and Chidobe Awuzie (Colorado). Better-than-expected play strength and quality hand fighting help him clear press coverage. However, injuries have plagued Patrick throughout his college career.

While his return ability gives his draft stock a bump, his tape also shows a measure of natural talent as a receiver who can create some separation. If he finds the right team fit, White could carve out a role as a fourth or fifth receiver and return man. ~ Lance Zierlein, via NFL.com

Started the last 39 straight games of his career, including all 13 in 2016…named one of four overall team captains for the ’16 season…2nd team pre-season All-SEC center, as selected by the league’s coaches…earned the Hugh Hendrix Award for being a player who most strains his potential following spring practice…recipient of the Wallace Butts Football Scholarship. ~ GeorgiaDogs.com

• Named Honorable Mention All-C-USA
• Named Third Team All-C-USA by Phil Steele
• Started all 13 games and led all linemen with 1,043 total snaps
• Had 90 or more snaps in a game four times
• Part of an offensive line that had the most pass attempts in C-USA and the fewest sacks allowed
• Integral part of an offense that produced a 1,000-yard rusher, 1,000-yard receiver and set single-season records in points, touchdowns and total yards

• Named Honorable Mention All-C-USA
• Played in all 13 games and earned 12 starts
• Led all offensive linemen with 991 snaps played
• Was integral in the Blue Raider offense setting single-season records in total offense, scoring and passing yards while helping produce the first 4,000-yard passer and two 1,000-yard receivers in the same season for first time in school history

Wylie was one of the anchors on the stellar EMU frontline as he earned Third Team All-MAC honors. The redshirt senior started all 13 games at right tackle last season. He finished his career with 45 starts, which ranks fourth all-time at EMU, while his 47 appearances were tied for 12th all-time.

Wylie’s 34-inch vertical at Pro Day would have ranked first for offensive linemen at the NFL Combine by two full inches. His 9-foot-7-inch broad jump would have tied for first, while his 4.5-second 20-yard shuttle would have ranked second. ~ EMUEagles.com

Henry, is coming off a strong senior year that earned him honorable-mention All-Mountain West Conference honors. A transfer from Iowa Western College after a brief stay at Weber State, the San Diego native made 137 tackles the past two seasons, second on the team to linebacker Dakota Cox during that time span. Henry had 5½ tackles for loss and 10 pass breakups. ~ ABQJournal.com

On NFL.com, draft analyst Chad Reuter listed Payne among the Top 10 players in the Football Championship Subdivision (FCS) “that will make an impact in the NFL.” Stetson plays in the Pioneer League.

“In a world where safeties are being asked to play more around the line of scrimmage, guys like Payne are coveted,” Reuter wrote. “He’ll attack the quarterback when used in the nickel position, and is adept at making plays in coverage, as well. Showing coaches he is willing to consistently take on and shed blocks around the line, as well as fulfill his man coverage abilities, will earn him playing time by the end of his rookie season.” ~ Stetson.edu