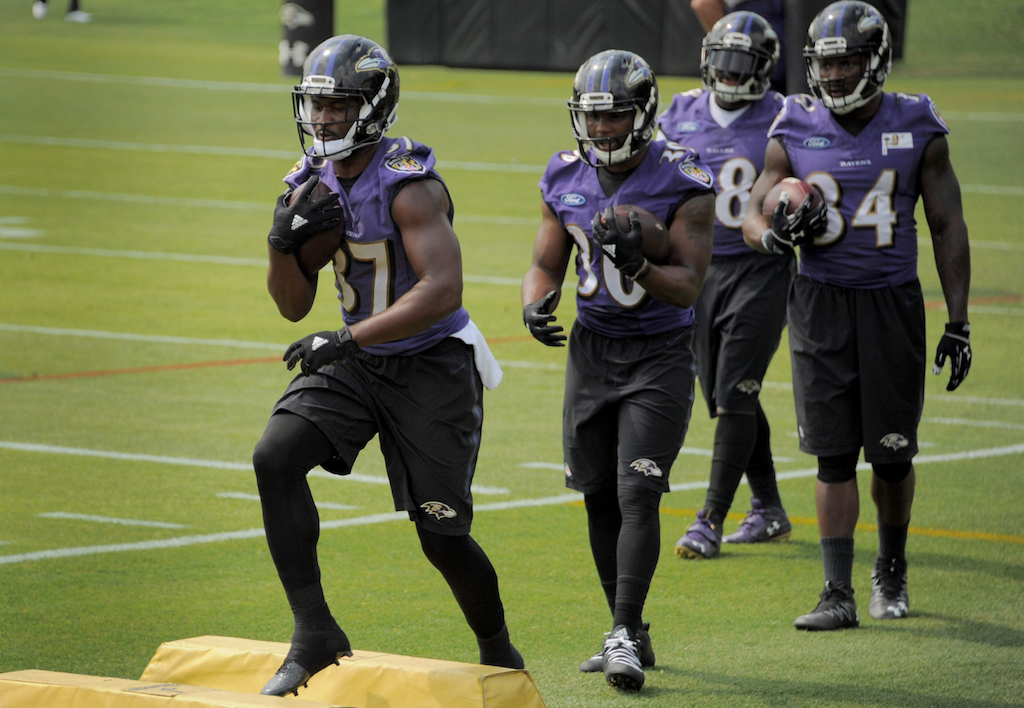 The Ravens have invested significant draft capital and cap dollars in the defense so far this offseason, despite an offense that lacks playmakers. During the State of the Ravens presser back in January, the Ravens said that they would commit resources to fix the offense.

“We need to add some depth in the secondary. We need to improve in the offensive line. We need to find a complementary receiver. I think those are the areas that we feel like we should attack this offseason – whether it’s through free agency, the drafts, trades –  whatever way we have to do it, but to get better in the secondary, find a complementary receiver and get bigger and stronger in the offensive line.” ~ Ozzie Newsome

In my book, that’s a net loss.

The offseason doesn’t end until the Ravens head to Cincinnati for the 2017 season opener. But if Newsome and Harbaugh plan to fulfill their respective commitments, they better get busy.

It is quite possible that the Ravens are looking at 2017 has a stepping stone. As cap dollars become more available in 2018, the Ravens could look to invest their financial resources and draft capital on offense which would then complete the re-tooling. And if that is in fact the behind-the-scenes plan, it suggests that John Harbaugh doesn’t sit upon a hot seat after all. At least not in 2017.

Despite the many additions to the defense, the Ravens still have one glaring hole – the position vacated by the retired Zach Orr. Those competing for the position include, but might not be limited to Kamalei Correa, Albert McClellan and Patrick Onwuasor.

The front office execs and scouts are more than likely pulling for Correa. The former Boise State Bronco was limited in 2016. The coaching staff failed to properly place his skill set as an edge presence, opting instead to force feed him an unfamiliar position. Then, after a practice injury, Correa’s rookie campaign morphed into a wasteland – something this Ravens coaching staff has done too many times with the likes of Paul Kruger, John Simon and Arthur Brown.

When will they learn?

It seems that every year since the departures of former Ravens Derrick Alexander and the late Michael Jackson, the Ravens are looking to improve the position of wide receiver. This year is no different.

But the Ravens failed to use any of their first four picks in the 2017 draft on a pass catcher for Joe Flacco and now they are forced to consider retreads like Victor Cruz and Anquan Boldin.

Count me among those who think that it’s time to give the young guys a chance. Let’s see what Breshad Perriman, Chris Moore, Michael Campanaro and even Chris Matthews can do. Matthews, you may recall, had 4 catches for 109 yards and a touchdown in Super Bowl XLIX. He delivered when given a chance on the sport’s grandest stage.

Look, if some team wants to overspend for a WR who has played in only 18 of his team’s last 48 games (Cruz), let them! The Ravens would be better off spending their remaining cap resources on reinforcements for the offensive line.

You may recall that back in 2014 when Michael Oher left as a free agent, questions surrounded the position of right tackle right on through training camp. The names of veteran free agents like Eric Winston were bantered about as potential solutions to RT. But the Ravens avoided such temptations and they allowed Ricky Wagner to earn the job. And he did.

Perhaps the Ravens plan to allow similar developments at center and right tackle this summer. They’ll have OTAs, mandatory minicamp and training camp to determine if they really need to make a move on a veteran player to help protect Joe Flacco and reinvigorate a running game that was largely abandoned in 2016.

Nick Mangold is a free agent vet often pegged to the Ravens, particularly since his visit in April. But Mangold, even by his own admission, isn’t 100% healthy and that coupled with rumored contract demands in the $7M/year range, probably explains why the former Jet remains unemployed.

Speaking of the running game, one name that has been mentioned as a possibility for the Ravens, and a player that they expressed interest in, in the past, is LeGarrette Blount. Blount signed with the Eagles today and if Adam Caplan who has close ties to the Eagles is right, Blount will be the first and second down back in Philly. That would leave third down and/or throwing downs for promising rookie Donnel Pumphrey, Wendell Smallwood and 13-year vet Darren Sproles.

Might that free up Ryan Mathews and if so, could he be a player of interest for the Ravens?

Blount will give #Eagles badly needed size at running back. Look for him to be primary 1st and 2nd down RB.

Mathews isn’t exactly a model of health having missed 3 games in 2016 but the Ravens wouldn’t have to lean on him much, particularly when Dixon returns following his four-game suspension. Mathews style might also match up nicely with offensive assistant Greg Roman’s running game approach. The former first-round pick out of Fresno State is scheduled to earn $4 million in 2017. Clearing Mathews from their books would trigger an identical cap savings for the Eagles. He turns 30 on October 10.

Last season against the allegedly stout Ravens run defense, Mathews had 128 yards and a score on 20 carries.

That’s probably something neither Buck Allen nor Lorenzo Taliaferro could manage on their best day.