OTA’s On The Horizon

Battles at WR, RB Lie Ahead

The Baltimore Ravens will start the first of 10 OTA’s in just a few short days. While they won’t be donning pads, thus preventing meaningful contact, the intensity of the practices will be full speed and it will enable team officials to determine whether or not their team is up to par heading into training camp. It might also serve as a warning signal that they still need to add players to get them over the hump in order to compete.

There are a few positional battles that will begin on May 22nd that could wage on throughout the summer, particularly at running back and wide receiver.

It appears for now as if Terrance West will receive most of the work in the backfield as the lead back entering the 2017 season even with the addition of veteran back Danny Woodhead. Beyond West and Woodhead, the depth chart becomes uncertain given the four-game suspension of second-year player Kenneth Dixon. While Dixon posted 382 yards on the ground on 88 attempts, he appears safe as long as there isn’t any more off-the-field blunders.

The last spot in the Ravens offensive backfield will be a battle as Buck Allen will seek to stave off Lorenzo Taliaferro. Allen had secured a spot in John Harbaugh’s proverbial doghouse for much of 2016 due to a lack of production, while Taliaferro isn’t able to stay healthy. Both are contributors on special teams however, Taliaferro could be the better fit given the Ravens lack of a big bodied short yardage back.

Darkhorse: Undrafted running back Taquan Mizzell. Head coach John Harbaugh spoke about the need to add a speedy, shifty running back this offseason. Mizzell fits the bill. The former Virginia standout stunned those viewing the 2016 NFLPA Collegiate Bowl with his blazing speed. Known as “Smoke”, the former Cavalier has posted a 4.36 in the 40-yard dash and could fill a special teams role. 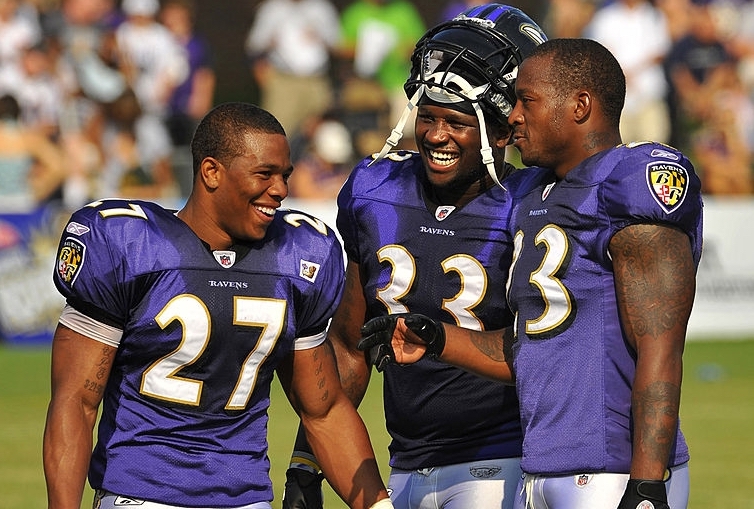 The position has been a problem for the Ravens throughout their franchise history and it appears the struggle will continue looking at the depth chart. The organization failed to add a wideout during the 2017 draft and aside from Mike Wallace, who struggled during the second half of 2016, there is no proven talent.

Breshad Perriman is an unknown. We caught a glimpse of Perriman’s ability last season when targeted, but he struggled at times. Another healthy offseason for the Ravens 2015 first-round pick could pay dividends. Behind Breshad, the list of wideouts won’t keep too many defensive coordinators up at night.

Michael Campanaro is back and per reports on Baltimore Ravens.com he says the receivers will show up big in 2017. It’s tough to argue Campanaro’s ability when on the field. He is the shifty receiver who runs clean routes and gets the separation the Ravens offense needs but he’s struggled with injuries throughout his young career.

Behind Campanaro is a list of names one will take to Google to find out just who they are including 2016 fourth-round draft pick Chris Moore. Moore’s name has been brought up by several Ravens this offseason including recently retired receiver Steve Smith Sr., who sees the former Cincinnati Bearcat as a breakout candidate. Moore had just seven receptions for 46 yards last season.

Darkhorse: Given the Ravens offseason comments about adding a veteran free agent wideout which will likely be soon, Keenan Reynolds, Chris Matthews, Kenny Bell, Quincy Adeboyejo, C.J. Board, Tim Patrick or Vince Mayle will have an uphill climb to make the 2017 roster.

The questions about the aforementioned positions will take center stage soon enough when OTA’s kickoff over the next few days. Here’s hoping some answers emerge in the not too distant future.

Brian Bower is avid football fan, born and raised in Baltimore, Maryland. He has covered the Baltimore Ravens and NFL player positives in the community for the past 6 years. This will be his 3rd season with the Russell Street Report. His work has been featured on NFL.com, ESPN blogs, Comcast SportsNet Baltimore, as well as the Baltimore Ravens web page. He is also a regular guest on local radio and ESPN Radio in Honolulu, Hawaii. Brian is very involved in the community and has spent the last twenty years as a volunteer firefighter. Email him at bbower@russellstreetreport.com.