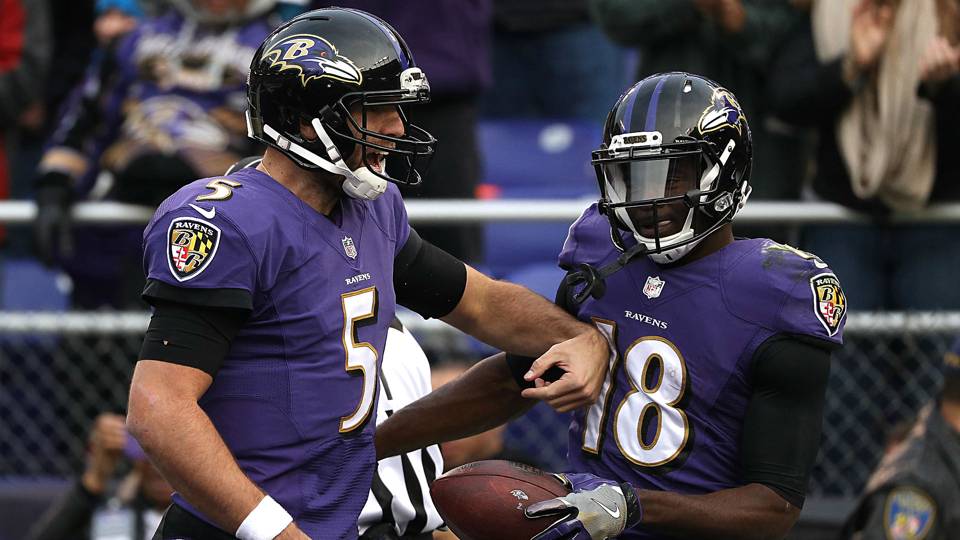 As the Baltimore Ravens continue to unveil a very early dress rehearsal during OTAs, the spotlight will shine brightest on third-year receiver Breshad Perriman. Perriman – and to a larger extent, the entire WR group – is being heavily scrutinized by the media and fans.

Every route, every catch, every drop.

But for the former Central Florida standout, that attention would have been reduced if the Ravens had drafted a receiver early to lessen the load. However, now the heat remains on Perriman, which he needs to be ready to embrace.

Imagine if you were Perriman sitting in front of the TV on draft night and you saw fellow small-school pass catcher, Corey Davis, go early to Tennessee when Baltimore was linked to him for months? There must have been a sense of relief, right? Especially after Mike Williams went next and John Ross right after?

The early run on receivers wasn’t expected in a draft loaded with dynamic defensive playmakers, but that run in many ways could shape Perriman’s destiny with the Ravens. Now, unequivocally, there is no one standing in his way to prevent him from proving he’s worth the first-round investment the team made in him in 2015.

The team extended that window of opportunity even wider by not pursuing free agent WRs from a pretty deep class of veterans.

By default (or design), it’s his show to run with. He just needs the opportunity and the snaps to keep progressing. He also needs the right type of plays and play-calling to showcase his freakish abilities — raw speed, length, leaping ability, and power. 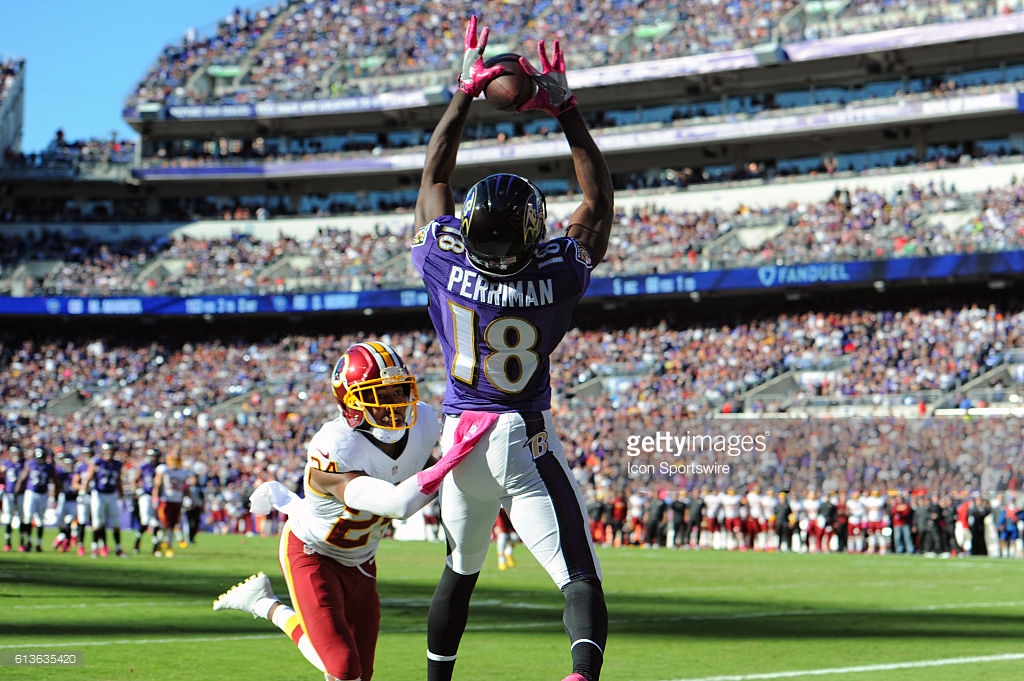 There’s a lot to like about Perriman’s performance from last season. First and foremost, he averaged 15.1 yards per catch (YPC).

Let me restate this…he averaged 15.1 YPC in a pass offense that didn’t throw the ball deep.

That placed him 13th in the league despite being the fourth-least targeted receiver in the top 13. In contrast, Kenny Stills, who ranked third in the league in YPC, and had a breakout season with Miami, had 15 more targets but only two more plays covering 20 yards or more. And that doesn’t even factor in Stills’ snap count, which easily eclipsed Perriman’s in 2016.

When you look at how Perriman made his big plays, the raw physical skills and talent were on full display.

(Note: For the video highlights below, you’ll have to click over to YouTube, thanks to the NFL’s silly rules about sharing their videos. We apologize for the inconvenience. Open the video in a different tab, watch the play, come back and read our description.)

His jump ball snag against the Giants on a post pattern highlighted his ability to track and use his size to box out defenders for the ball. And he won against Dominique Rodgers-Cromartie, one of the best slot cover corners in the league.

Give the young receiver credit for competing on the contested balls that came his away, especially when you look at who he went up against.

He outjumped former Buffalo Bill Stephon Gilmore in the opening game on a 35-yard catch. If you look back at the play, Perriman had a clear step on Gilmore, but he had to slow down and wait for the ball, and when Gilmore had a chance to catch it, Perriman was still able to locate at its highest point.

People have knocked Perriman’s technical abilities as a receiver, but these catches also illustrate his understanding of how to set defenders up and go get the ball when it’s a 50-50 proposition.

Now it’ll be up to him to improve on the rest of his technical skills, especially as a route runner. He needs to use his 4.2 speed to stop and start sharply without breaking stride, and sell the deep route to work back underneath. That’ll open up his ability to run more comebacks and extend his route tree outside the numbers. Given his size/speed combo, those routes should be easy pickings.

The route tree will only expand as Perriman’s footwork improves. He’s not a natural route runner for a big guy like Julio Jones or A.J. Green. He’s still going to need to rely heavily on his pure speed and size to win against tight coverage. And that’s okay. OTAs and training camp and the rest of the preseason will be a critical time for Perriman’s improvement.

At minimum, the big play is what Perriman can and will deliver. He’s also proven that he can be effective in the red zone in limited chances. The coaches just need to play to his strengths for now until he shows that he can handle more complex and demanding route combinations.

My prediction: If Perriman takes this golden opportunity seriously, he can put up the same numbers as Stills. He can score close to nine or 10 TDs, rack up over 700 yards and be amongst the league leaders in YPC, even if his drops and inconsistencies are still an issue.

Perriman was essentially a rookie last season. In fact, if you stack up his first-year numbers with fellow 2015 draft classmate DeVante Parker, they are practically identical (494 yards and 4 TDs for Parker compared to 499 yards and 3 TDs for Perriman). In Parker’s second year, he gained 744 yards and caught 30 more passes. Perriman is on the same progression path, and unlike Parker, he doesn’t have Stills and Jarvis Landry to compete with for more targets.

As John Harbaugh emphatically stated at the NFL league meetings in March, the expectation is for Perriman to step up. Anything less is unacceptable.

“He has to be out there making a difference for us. Period. End of story.”