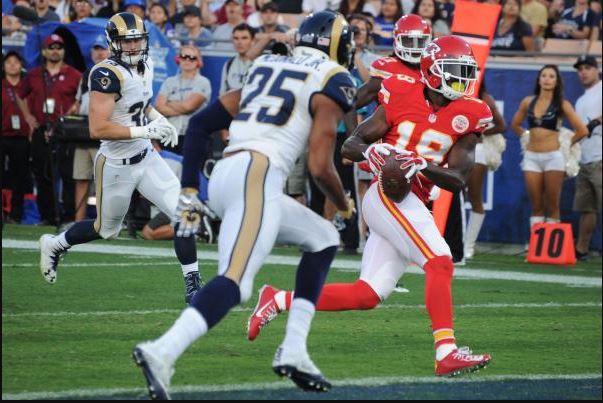 The signing of veteran receiver Jeremy Maclin answers a question that must have come up at some point from the offensive staff during the recruiting process: is he a slot guy?

Yes, Maclin can and will play the slot often when the team is in their three-receiver sets.

Mike Wallace and Breshad Perriman are prototypical outside targets who run limited route trees. Wallace saw some snaps in the slot last season, especially when he went up against a CB who travels (meaning, a corner who didn’t stick to a particular side). But for the most part, he lined up outside the numbers. Perriman is still a work in progress and his route-running skills need to be less one-dimensional.

In contrast, Maclin is a crafty route runner who can run the entire route tree. He can certainly run the “nine” routes and get vertical like Wallace and Perriman. However, he can slide inside and operate from an expansive route tree. With his ability to be a two-way option, he brings a lot of versatility to the offense.

In Kansas City, 47.3% of Maclin’s snaps came from the slot in 2016, easily the most in his career. In 2015, he caught 27 passes and six TDs from the slot. Maclin shouldn’t be labeled a “slot receiver” in the truest sense because he can still provide plenty of value on perimeter routes, and he’ll be the starter when the team is in their base sets. But he’s certainly trending in that direction and fits Ozzie Newsome’s description of a “complementary” option the team identified as a need during their State of the Ravens address.

In fact, given the ascension of Kansas City receivers Tyreek Hill and Chris Conley, there’s no doubt that Maclin would have continued to function as more of a complementary weapon on inside and underneath routes had he stayed in KC.

What makes the former Chief and Eagle so dangerous on his routes? Maclin is a sudden route runner who can break sharply in and out of his cuts. He also understands how to disguise his routes. Compared to a guy like Eric Decker (also an excellent slot target, who the Ravens are rumored to still be interested in), Maclin isn’t as physical, but he’s comfortable working the inside terrain, and has the ability to break tackles and get loose in the open field.

In Kansas City, Maclin was also a motion player in an offense that was heavy on pre-snap movement. Under Marty Mornhinweg, motion in the Ravens offense was more prevalent from the slot or inside target. For instance, Steve Smith would often go in motion and release from a “stack” position behind Wallace.

Maclin is also going to be an important chess piece as a “move” and motion player in the run game. He can run sweeps and reverses. As I discussed in an article earlier this year, Roman’s run game weaves in decoy jet sweeps and other forms of misdirection from receivers, so Maclin’s ability on those plays will play a role in opening up the run and play-action passing game.

All in all, Maclin’s abilities as a complete WR will make all the difference in how the passing game evolves in 2017. He’ll have the chance to be a safety valve on inside routes for Joe Flacco. He’ll also be able to take advantage of the deep safety attention that Perriman and Wallace attract. And he can still win one-on-one opportunities outside when he’s flexed to the X or Z spot.

For the Ravens and Flacco especially, the slot has been a critical position for years. Flacco just lost Dennis Pitta who had the most receptions from the slot (50) of any TE last season. We know what Anquan Boldin meant to the team as an inside target on money downs. And then there was Smith, who would work the slot from time to time when the team needed it.

Now it’s Maclin’s turn to be “that guy.”