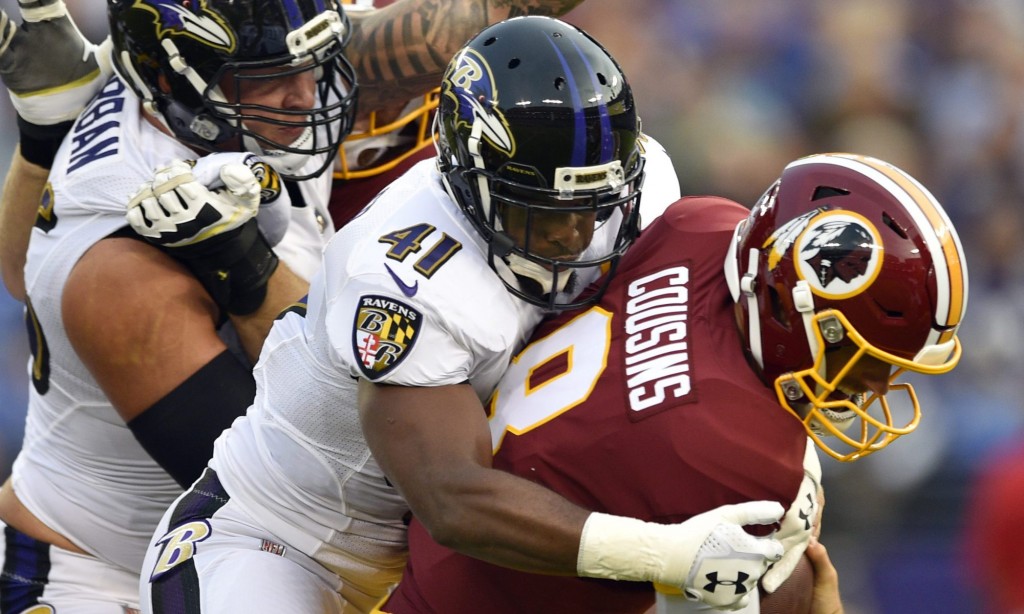 For weeks, we’ve reported how the Ravens offense has struggled during training camp. Last night, perhaps you understand why.  The Ravens defense plays fast. They are menacing, and reminiscent of another young developing defense – that from the 1999 season.

Of course, the NFL game is one of adjustments. How a team adjusts in-game to the strengths and weaknesses of an opponent, more times than not determines the game’s outcome. Preseason doesn’t really provide for that. But what it does provide for is a glimpse into a team’s depth and for the Ravens, at least during their first preseason outing, the view is bright, particularly along the defensive front.

Here’s the Good, Bad, Ugly & The Megan Fox from the Ravens 23-3 win over the Washington Redskins.

The Ravens “first team” offensive line held up well. Ronnie Stanley was stout; Ryan Jensen showed why any further discussions about Nick Mangold have quieted; and James Hurst seems to have come a long way. Jermaine Eluemunor is raw and Matt Skura seems to be a capable backup. Both were beneficiaries of extended playing time…Terrance West has embraced the downhill approach of the Greg Roman influenced running attack. He showed nice hops on this TD run and some jump cutting ability during the Ravens first scoring drive…

Taquan Mizzell showed flashes. It would be nice to see him in the mix earlier in the game with the 1’s. He’s a better player than Buck Allen and is a threat to Allen’s employment…Camp fodder QB Josh Woodrum was by far the best quarterback on the field (a scary thought). He looks unfazed by the big NFL lights and was a perfect 4 for 4 to go with the perfect QB rating of 158.3…Tim White showed why there’s a buzz about him, although as a return specialist his style is a bit too cute for the NFL…

Since the Ravens secondary was barely tested, it’s difficult to describe their outing as a group primarily because the front seven was so dominant. Michael Pierce picked up where he left off in 2016 and was menacing in the backfield. Terrell Suggs and Matt Judon were strong at the point of attack as edge setters. Both effectively scraped down the backside of running plays, particularly Suggs…Bronson Kaufusi was active and disruptive, although a bit overzealous, which is completely understandable given that this was his first NFL game…Kamalei Correa got off to a solid start and his versatility will provide Dean Pees with options…

Tyus Bowser displayed his athleticism in space and provides a push off the edge. He won’t be another of the Ravens second-round busts…Back to the secondary, Tony Jefferson provides enthusiasm, physicality and leadership. He’s very quick to the ball and he’ll be fun to watch in 2017. TJ could prove to be among the Ravens best free agent acquisitions in their history…Love the role being filled by Anthony Levine. He’s versatile and he too gives Pees options. But we’ve seen Levine used before like this in the preseason, only to fade from Pees’ plans when fake games conclude…UDFA Jaylen Hill was very active. He broke on a few balls very well. His technique was spot on and his tackling was textbook. It’s early but he’s certainly on his way to being among the team’s final 53.

Sam Koch was spectacular, regularly pinning the Redskins inside the 10-yard line. He helped to flip field position in the Ravens favor throughout the first half. Keenan Reynolds gave a lesson to White on how punt returners are more effective when making quick decisions and running north and south.

On a programming note, it was great to listen to Brian Billick’s analysis. He’s insightful and seems genuinely excited to be back in the Ravens mix. He ticked off a lot of people in the organization 10 years ago, but enough time has passed and the wounds should all be healed by now. He helped to change the culture of the Ravens and deserves his place in the ROH.

The Ravens second and third offensive line groupings were knocked around, revealing a lack of quality depth. Austin Howard will help but the Ravens might want to trade from their stockpile of front seven defenders to land some quality depth for O-Line Coach Joe D’Alessandris…Michael Campanaro and Chris Moore looked lost at times, particularly during a second quarter route combo that placed them in the exact same spot…Buck Allen was inconsistent and doesn’t look like the second best runner on the roster…Bobby Rainey’s second tour of duty in Baltimore will be short-lived…Do the Ravens have any tight ends that can run routes deeper than 3 yards?…Lorenzo Taliaferro looks lost at fullback.

Kick return duties are wide open. It might help if the Jerry Rosburg’s kick return unit actually had a plan. They looked rather clueless…The Ravens Marching Band is nostalgic. But nostalgia has its place and it’s NOT after a Ravens scoring play. I’m sure they are all nice people but they’re about as exciting as music played on AM radio. 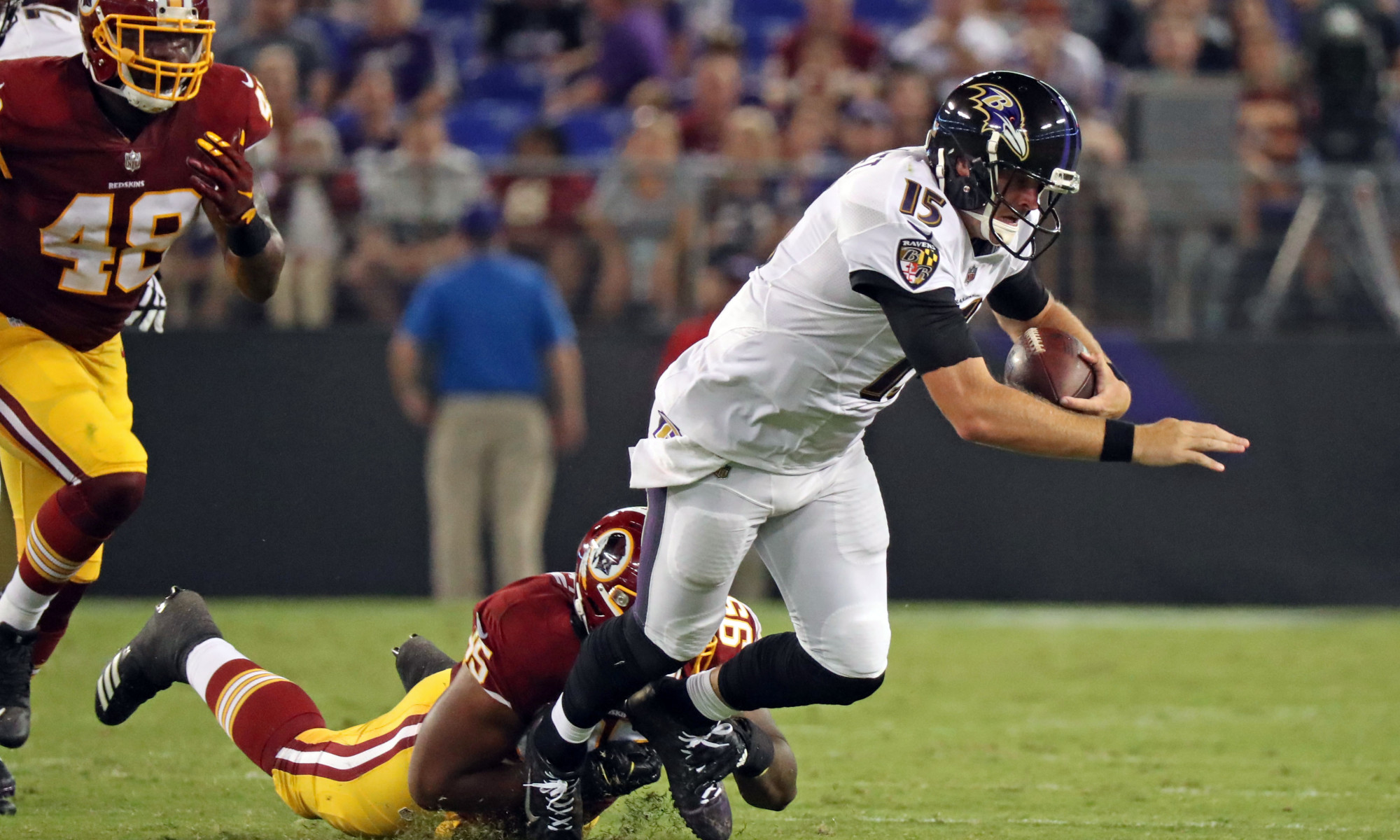 Ryan Mallett could have put the Colin Kaepernick talk to bed. Instead, he did his best to keep it alive. He lacked touch, velocity and accuracy. If he was on the mound as a pitcher, his performance equated to bad Ubaldo Jimenez. In his defense, his targets were Messrs. Moore, Campanaro and White who collectively have 19 catches in their NFL careers…Dustin Vaughn may as well be dust-in-the-wind. His evening was cut short after he aborted a 3rd-and-long in the third quarter (“kill, kill”), opting to run it instead. C’mon man!

Does anyone here know what a catch is in the NFL? The officiating crew overturned two catches on the field, one from each team, due to this “football move” BS! Look out for another season of inconsistency from the zebras as it relates to the definition of a catch…By the way, what’s the point of that TV bling hanging around the dude’s neck during reviews? If the decision is made in New York, why not due what MLB does and just give the referee a headset? 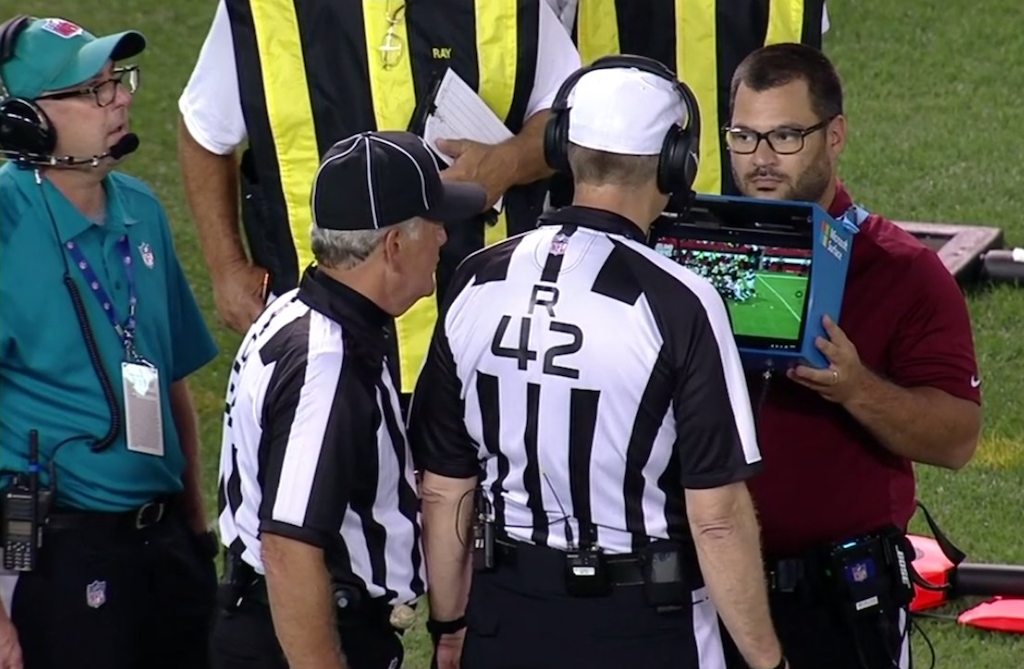 The Ravens front seven can bring it. There’s a ton of talent there and as such, opposing offenses have to pick their poison. How they account for Ravens defenders could determine which of them shines the most. Last night it was Brent Urban. He was menacing and played smart. During his abbreviated night, the former Virginia Cavalier registered four tackles, 1 for a loss; he had a sack and assisted on another plus he forced two fumbles. His ability to jump, extend and disrupt a quarterback’s rhythm forces QBs to bring the ball back down, which disrupts route combinations, paving the way to sacks. 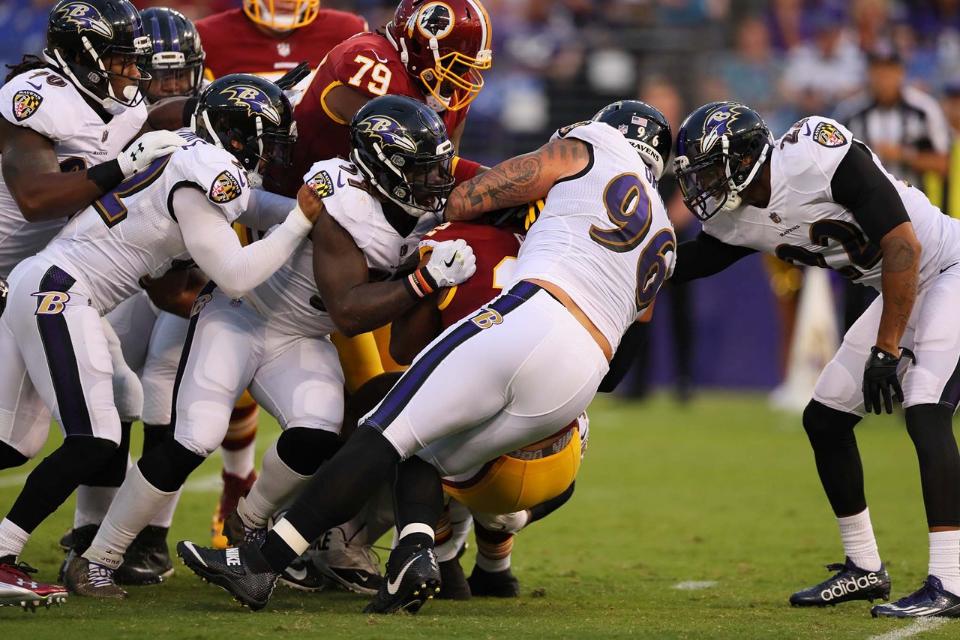 QUOTE OF THE DAY

“I was happy with them. Like ‘Sizz’ [Terrell Suggs] said, we’re chasing perfection every play. I think we have a long way to go, but it was a good start. I think the energy was really good, they ran to the ball, played good fundamentals – it was good.” ~ John Harbaugh on the Ravens first team defense.