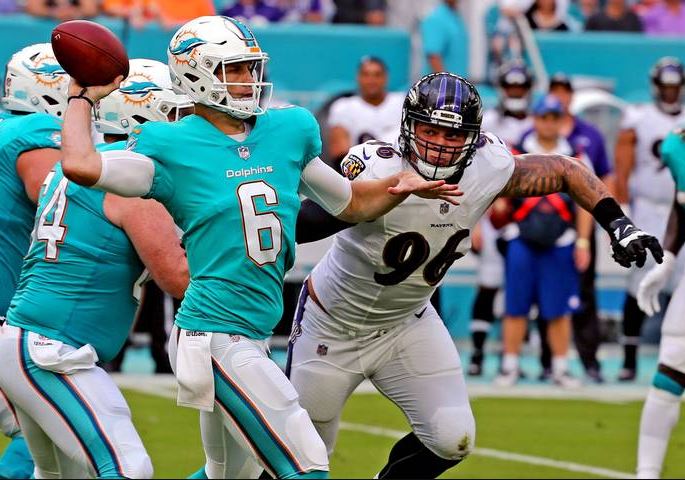 It’s beginning to look a lot like the Josh Woodrum era in Baltimore…. Alright that may be a bit of an exaggeration, but you have to give Woodrum props for shining when given an opportunity. Shining so bright, that it’s blinding Ryan Mallett during his throws.

We’re going to break down the grades a little differently this week. On offense, we’ll break down how the run and pass game worked on Thursday night, while taking a close look at the offensive line in each section. Let’s get started.

The first unit offensive line deserves a lot of the blame for the poor run game in the first half. Of note, newcomer RT Austin Howard was particularly bad and was driven back by defenders on several run plays. Given that Howard’s strength was his run blocking it is especially concerning, but he’s only had a week to practice and after offseason surgery is likely not in full game shape. This is a guy to keep a close eye on over the next two weeks.

Terrance West finished with 6 carries for -2 yards. As mentioned, the line did not help, but West just does not seem to be a good fit for the new scheme, which focuses more on power man blocking. West lacks the acceleration and burst you want to see in a power scheme when you’re designing the blocking to open a lane.

Javorius “Buck” Allen looked much more effective last night. When Buck gets the ball, he accelerates instantly upfield and it resulted in 10 carries for 40 yards. This may be an unpopular opinion, but it would not be surprising to see Buck slowly take over the lion’s share of the reps from West.

Taquan Mizzell is still raw, but, in the same way Buck does, when he’s handed the ball he accelerates upfield. Mizzell, a likely practice squad candidate, looked better than West did last night, which has to be concerning to Ravens fans.

If the offensive line continues to perform like they did last night and we see West’s cement feet out of the backfield, it’s going to be a long season for a rushing game that struggled last year.

If someone has said prior to the preseason that the strength of this offensive line was going to be pass blocking and they’d struggle run blocking I would have been floored by the opinion. However, through two games, that is what we are seeing.

Even without LT Ronnie Stanley and RG Marshal Yanda, the pass protection held up well last night. The exception being a couple of pressures from Ndamukong Suh, but to put it in context Suh was pass rushing against RG Jarrod Pughsley who has been a career practice squad player.

As for the quarterback situation, Mallett really dragged down this grade. Mallett was off again last night and finished 13/22 for 113 yards 1 TD and 2 INT. Mallett seems to be struggling with staring down his receiver. On the 4th and 2 in the 1st quarter he stared down Danny Woodhead as he made his cut and delivered the pass late for an incompletion.

Woodrum deserves a lot of credit. Yes, he is going against the defense’s scrubs, but when given the opportunity he’s shining. Woodrum was 8/10 for 110 yards and added 2 rushing TD along with 15 yards. What Woodrum is doing so well is scanning the field. He seems comfortable in the pocket and is reading the entire defense. This was evident on 14-yard rushing TD. He waited for the routes to play out, saw a hole up the right side of the field and took it to the house.

A petition should be started for Woodrum to start next week against the Buffalo Bills. He deserves his shot to play with the big boys. Woodrum gets an A from me, but Mallett’s overall C- brings the units grade down.

As for the pass catchers, it was great to see Jeremy Maclin and Benjamin Watson make their first grabs as Ravens.

The guy that impressed me the most was TE Maxx Williams. Williams looked sluggish last week, but last night was a good showcase of Williams’ skillset. Granted it was against the 2nd and 3rd stringers, but he displayed his athleticism and an ability to work the middle of the field.

Another guy who deserves credit is Michael Campanaro. Campy has always shown skill when on the field, but getting on the field has been a significant problem. As one member of the RSR forum said, Campy is a zone buster (shout out to Jsmoove). He found the creases in the zone defense last night and was a reliable option for Woodrum. Here’s to hoping his body can hold together.

This group has an insane amount of depth. Aside from one poor series, in which Senorise Perry ran in an 11-yard TD on a terrible blown assignment by Za’Darius Smith, the front 7 was unbeatable.

The Dolphins were held to 2.4 yards per carry and the pass rush brought the noise all game.

The Ravens pass rush only took home two sacks (Otha Foster and Tim Williams), but had 6 QB hits and several pressures. The big change in the pass rush from last year is the athleticism.

Z.Smith may be poor against the run, but he’s looking good as a situational pass rusher. On several passing downs, he was lined up inside in the way the Pees used to line up Pernell McPhee to rush the interior. This is a crucial year for Smith and if he can mimic the McPhee role it will go a long way in increasing the pass rushing proficiency.

One guy that stood out to me was Tim Williams. Williams struggles against the run, but I think most expected that and it is the reason he fell to the third round. There’s no denying his pass rushing abilities though. Grooming him behind Terrell Suggs is favorable for the Ravens coaching staff.

Kamalei Correa had a solid bounce back game. He had a play at 2:54 in the 1st quarter where he knifed through the Dolphins offensive line to interrupt the running lane. He didn’t get the tackle, but he made the Dolphins back cut before he wanted to and the defensive line ate him up. Correa also seems to be holding up in pass coverage. It will be interesting to see what Filmstudy grades him with a closer look

Overall, the defensive line was dominant again. There’s not much to say that hasn’t already been said. Brent Urban, Michael Pierce and Brandon Williams are one of the better trios in the league against the run and will be fun to watch when the season starts. The depth was obvious as guys like Carl Davis and Willie Henry dominated the backups.

The secondary had another impressive game. When the starters were in the only lapse that was noticed was a 16-yard completion to DeVante Parker against Jimmy Smith.

Brandon Carr stood out last night as he had tight coverage on two plays against the Dolphins starters and had a beautiful tackle on Parker’s catch. Parker tried to cut across the field and was met by Carr who got low and took his legs out. It’s good to see Carr making plays opposite Smith as they could form a nice tandem throughout the season.

Undrafted rookie Jaylen Hill was my player of the game last week and he followed that up with another strong performance. In the 2nd with 4:20 left he had a particularly nice pass defense. He is starting to lock in a roster spot and is approaching a starting spot as the nickel corner, currently held by Lardarius Webb.

One guy that this unit was missing last night is first rounder Marlon Humphrey. In fairness, Humphrey is coming off an injury, but it’s disappointing to not see him out there when the offense is in such disarray. Have to think that first-round pick could have gone elsewhere.

Overall, the Dolphins threw for only 74 yards and added only 46 on the ground throughout the game. The Ravens defense was smothering again and has some great depth heading into the season. It seems that Ozzie’s plan to focus on the defense is yielding positive results.

Last week I criticized OC Marty Mornhinweg and this week….I’ll do it again. The play design and play calling just seems bad. On the first drive, it was 3rd and 8 and the play design was a four-yard dump off to West. Last year we saw numerous play calls on the 3rd down where receivers would be running routes short of the first down marker and it’s going to be a long year if that continues. The preseason has not given much hope for Mornhinweg.

Dean Pees was great against last night. The Dolphins’ touchdown drive looked very vanilla and kind of the way Pees looked last year when playing with a lead. However, he called a beautifully designed blitz that resulted in a Webb sack and a Suggs holding call, which doesn’t show on the stats sheet. He had two defensive linemen drop into coverage and blitz the two linebackers as well as Webb off the edge. That’s the kind of design that can throw off the offensive line and we will hopefully see that come Week 1.

It’s rare that the A+ is given, but there’s no doubting its validity here. The special teams unit had another very impressive week.

Justin Tucker continued to prove why he’s the best kicker in the league connecting on 52, 41 and 27-yard attempts. Tucker clearly wanted to prove he is more than just a kicker and he did so by hustling down the field after a kickoff and recovering Perry’s fumble. Tucker grabbed the ball and went out of bounds to the delight of Ravens fans.

Was anyone else upset at the end of the 2nd quarter when Harbaugh didn’t let Tucker try for a 64-yard attempt? Say what you want about starting a bad streak, but that would have been fun to watch.

The special teams unit didn’t stop there. At the 4:10 mark of the second quarter, the Dolphins went to punt after a three and out. Chris Matthews knifed through the line for a block that he also recovered at the Miami 9-yard line, leading to the Larry Donnell touchdown pass.

The return game was quiet on Thursday night, but the punt and kick coverages were absolutely excellent. It’s obvious that kick coverage has been a focus and it is showing even with the backups on the field. Jerry Rosburg deserves a lot of credit for this unit’s high level of play through two weeks. It’s unfortunate that the Ravens lost Tim White to a thumb injury as he was looking like another special teams ace.

Player of the Game

It has to be Josh Woodrum this week. He was very impressive and, in my opinion, has earned a shot to run with the starters. He was described as nothing more than a camp arm, but he’s proving to be more efficient than Mallett and is showing some ability to run and throw on the run.