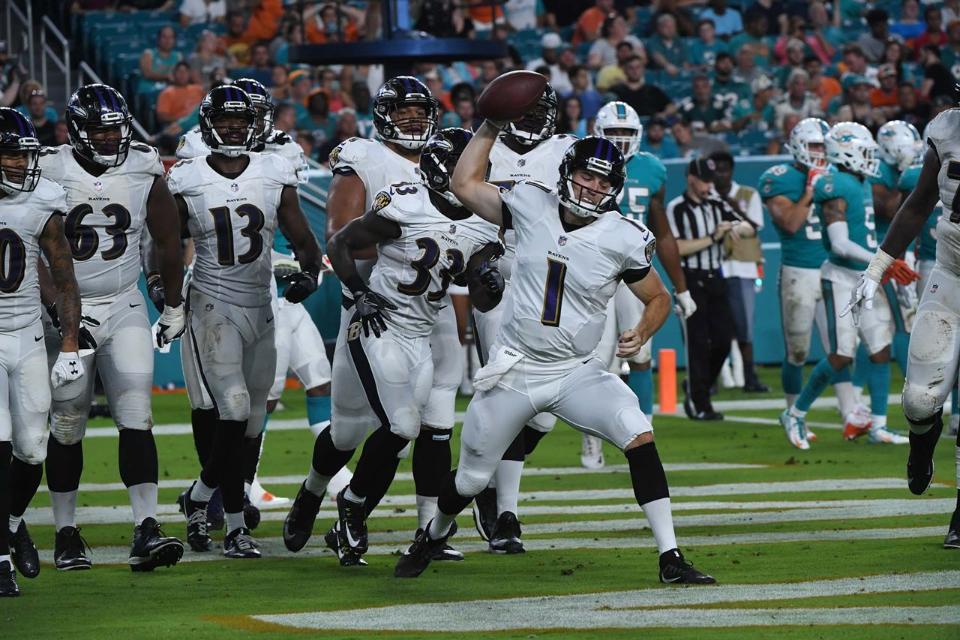 I mean, yea that was the final score, but also ironically the amount of divots recorded by each team in the 1st quarter of Thursday night’s Ravens-Fins fiasco on the Fins Field that looked like somebody gave me a 9 iron on the green at a golf course and told me to go to town (I’m a Top Golf guy, not a ‘play 18’ guy).

While the Ravens did walk away with the victory by the same 31-7 margin, let’s focus on the actual important issues at hand.

John Harbaugh, once again, goes for the “Dad look” with his glasses. He probably told stories to the vets on the sidelines that he told them 6 times over already in the past 6 months. John likely tried to crack a good football dad joke.

“Hey Sizz… did you hear that joke Mallett just told the receivers?

“Apparently it went… over… their… heads?”

Speaking of the elephant in the room, let’s chat about Ryan ‘Air’ Mail-it.

Last week, Mallett got a complete pass from yours truly (not that he knows what a complete pass is), with a shoddy O-Line, and a cast of unknowns in the receiving game during his time under center. I mean, he sucked, but I was willing to be patient.

Week 2 of the preseason gave Mallett the gift of receivers- Mike Wallace, Jeremy Maclin, and Michael Campanaro in there to help the backup QB pad his stats a bit. I mean, surely when the second team defense is in for Miami against Mallet he can do some damage, right?

Mallett ended the day with 2 awful picks on bad throws (could have been 4), and his sole touchdown came on a throw to a wiiiiiiide open Larry Donnell. Fortunately, he actually didn’t overthrow Donnell like he did [insert any other receiver on the roster].

It all works in the end pic.twitter.com/vFXbrCdRWT

So what do the Ravens do moving forward? It’s so obvious. The answer has been in front of them the whole time. Fans have been clamoring for this guy to take over the clipboard-holder duties for weeks now, and he’ll finally get the recognition he’s long deserved since his time in the NFC last season when he was under-utilized.

After a stellar Preseason Week 1 performance by Woodrum, he followed it up with 2 rushing touchdown and a 2-point conversion in the second half of Thursday’s game, until the coaches decided to give him a break and let Thad Lewis step in for a cup of coffee before he gets cut again.

But for everybody going after Mallett with pitchforks and torch… never mind. Just check out these 2 QB stat lines this past week:

We also need to give a nod to Justin Tucker, who already won Ravens MVP for the season after his game this week. J-Tuck boots a 51 yarder, follows it up with a fumble recovery on the ensuing kickoff, then a few inept Mallett passess later, Tucker drills another field goal.

That’s 6 on the board in under a minute. Something Mallett has never done.

At this juncture, the Ravens need to just sit Tucker before he hurts himself. Rest his leg. Prop it up on peacock feather pillows and wrap it in ice packs made from glacier water in the highest peaks of the Rockies, then have a priest come out and bless it before Week 1. With the way the offense isn’t going? Tucker’s leg and a much improved D is the only way this team makes a run in the playoffs.

-At his current snap count trajectory, Marlon Humphrey is expected to see 4 total snaps on defense by the final preseason game, and maybe even 20+ snaps by the end of the regular season!

-I am so glad Fins owner Ross spent some serious coin to add the canopies to his stadium. Really did wonders in the 105+ degree heat index at dusk in this week’s game…

-UDFA DE/FB/Professional Pile-Driver Patrick Ricard is making this team, and he’ll be more effective on both sides of the ball than Browns rookie Jabrill Peppers (I still vehemently believe Peppers is going to be a bust).

-Smokin’ Jay Cutler didn’t throw a pick and I’m so lost in life now. Jay without an interception is like beer without alcohol. Still leaves the same taste in your mouth, but it’s just not the same.

–Maxx Williams had a phenomenal 40-yard catch & run early in the third quarter… then spent the remainder of the game trying to catch his breath on the sideline. Speaking of which, has anybody checked on Maximilian since then? (I assume that’s his full name, and that he just added the 2nd ‘x’ to Max after watching Triple X, but also realizing he wasn’t that bad ass).

Onto Week 3 of the preseason against the Bills, where QB Josh Woodrum will see the starting snaps of the game. You heard it here first, folks!