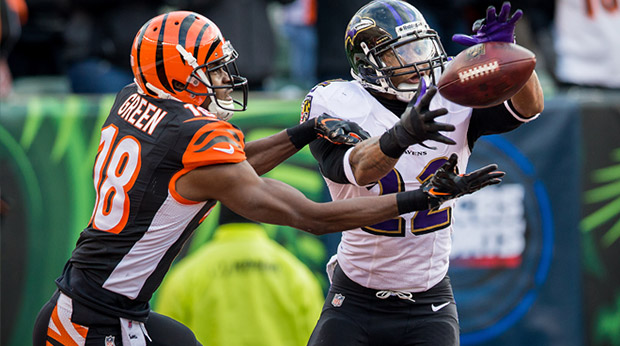 The Ravens have been down this road before, playing a Bengals defense that didn’t have star linebacker Vontaze Burfict in the lineup. They’ve had to face the incumbent, Vincent Rey, plenty of times in the past, and Rey has had some memorable moments against the Baltimore offense. Granted, his best game ever came in 2013 – but this is a player who is comfortable handling the starting spot for Burfict.

Rey’s strength is his ability to blitz, especially when it comes to his timing on inside cross blitzes. Traditionally, the Bengals have been a heavier A-gap blitzing team, especially going back to the Mike Zimmer days. Under Paul Gunther, the Bengals blitzed less than any team in the league last season (9.2 percent according to PFF), but I expect them get back to the blitz more often or at least bluff the blitz to test the Ravens’ shaky interior line. Keeping Rey in an attacking position also masks the coverage deficiencies that Cincinnati will have with Burfict out of the lineup.

Not only will center Ryan Jensen need to be ready to discern between blitz and bluff action from the backers, and work in coordination with the guards to pass off assignments seamlessly, offensive coordinator Marty Mornhinweg also needs to have built-in blitz beaters ready (crossers, angle routes to Danny Woodhead) to pierce the middle of the field.

For the Ravens’ sake, let’s hope that they left their receiver alignments mostly in the preseason rear window, because the wideouts were not able to get open against man coverage. Much of their struggles stem from the lack of any help from the play design.

The Ravens showed a lot of balanced spread looks. While they outflanked defenses with more four-wide and empty formations, the receivers rarely stacked on top of each other or provided any unbalanced looks to force the coverage to tilt to one side. This is also a trend we’ve seen from the offense in regular season play under Mornhinweg.

The Ravens will need to explore more unbalanced 3×1 looks (three receivers to one side), along with stacks to give their receivers a chance at the line of scrimmage, otherwise the receivers will be consistently tested by the Cincy corners to win against tighter underneath coverage.

From an overall coverage standpoint, the Bengals will likely continue to stick to their Cover 2 and Cover 4 combos that have worked well for them going back to last season. With the loss of defensive back Shawn Williams, it’ll be interesting to see how much range the safeties present on the back end to converge on the ball. Still, I don’t expect the Bengals to stray too far from their zone combinations. These coverages put pressure on the quarterback to hit the seams and work the deep-middle level behind the backers.

Flacco will have the opportunity to exploit some deep seams and splits in these coverages, but he’ll need to do a better job of pushing the ball beyond the backers, into those deep-middle layers, instead of opting to dump the ball off underneath and rely on his backs and receivers to break tackles in space.

This is the type of game in which receiver Jeremy Maclin could really flourish out of the slot if the team shows more three-wide sets. He has a keen understanding of where the soft spots are, when to sit down, and when to gear down his routes to create separation.

All we’ve heard throughout the preseason is how the Ravens are going to get back to playing a more aggressive style of coverage, going back to the Chuck Pagano and Rex Ryan days. They’re going to get right up in the faces of opposing receivers, use their hands to jam, and play a physical brand of football to impede the three-step drop strikes that Andy Dalton hits like clockwork.

Now, we’ll find out if Pees will stick to the script against the Bengals. First and foremost, cornerback Jimmy Smith needs to trail A.J. Green. No more passing Green off in the slot so he can line up against the nickel or even a safety (which we’ve seen before). Even with a deeper and more talented secondary across the board, Green has proven he will eat up any coverage missteps the Ravens present. While Smith hasn’t been perfect against Green (who has?), there really is no excuse for him not to shadow the All-Pro, especially given how often the versatile wideout will move to the slot and won’t stick to any one side. When Green is matched up against Smith outside, Eric Weddle needs to shade to his side and provide deep support.

With Green attracting double coverage from the team’s top secondary defenders, that means the rest of the unit will need to hold serve in man coverage against everyone else.

Operating from a three-wide, one tight look, the Bengals will challenge with Tyler Boyd, Brandon LaFell, and Tyler Eifert. With Ladarius Webb playing the slot against Boyd, Pees has the flexibility to use Tony Jefferson exclusively to match up against Eifert (more on this matchup later) while Brandon Carr would take on LaFell outside the numbers.

Eliminate the Underneath Perimeter Plays

With the addition of Joe Mixon, the Bengals have a dynamic new toy to challenge defensive pursuit angles. In the preseason, Mixon showed his combination of power and elusiveness to make defenders miss, particularly as a perimeter receiver on screens and outlet plays. Unlike Giovani Bernard (another tough player to corral in space), Mixon is built like a power back but he’ll stress defenders with his ability to let blocks develop and change direction like a smaller back.

Both Bernard and Mixon should be involved as third-down pass-catching options and on perimeter run plays to challenge the Ravens’ ability to chase sideline-to-sideline. The Ravens will have better speed at LB to chase than they’ve had in a long time. The key to keeping Mixon and Bernard contained will come down to the corners and safeties breaking down in space, maintaining their C-gap edge integrity, and finishing the tackles.

The Bengals are hardly a conventional offense. They typically use a lot of pre-snap motion and formation shifts to catch defenses out of position and create personnel mismatches. But Cincinnati also uses a steady mix of jet sweeps or fake sweeps to get defenses to over-pursue, creating openings for their ball carriers to get backside.

With the loss of rookie John Ross for the opener, the Bengals lack the horizontal speed to really make the sweeps and sweep action difficult to handle. However, given the Ravens’ aggressiveness, they should still expect to see these plays, with perhaps Bernard and Mixon used in the same role to get outside and gain yards in the open field. The Baltimore defense needs to stay disciplined and maintain their gap integrity.

I alluded to the likely matchup between Jefferson and Eifert earlier. Jefferson’s ability to cover tight ends one-on-one without help is going to be a major shot in the arm to the overall pass defense. As much as Jefferson’s skills as a run defender get the attention, he was a difference-maker for Arizona in man coverage situations. He’s a big reason why the Cardinals have stifled TEs over the years. When healthy, Eifert has been a matchup conundrum for the Ravens. He has the athleticism to flex wide and is a go-to red zone target for Dalton on jump balls.