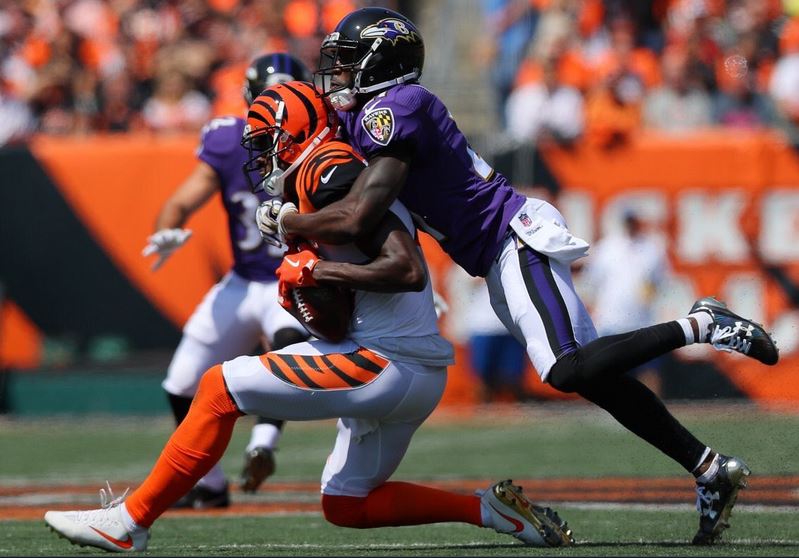 Tactically, the Ravens had one mission above all other missions, and that was to find a way to slow down the venerable A.J. Green. I made the point that defensive coordinator Dean Pees needed to shadow Green with cornerback Jimmy Smith. That didn’t happen, but you can’t argue with the results. Green was limited to 74 yards receiving. The only time he ever made a dent in this game was from the slot position.

Smith, Brandon Carr, and the rest of the defensive backs all took turns matching up with Green, with Smith leading the coverage frequency. The safety help was there all day so Green couldn’t get over the top. Pees also mixed in different coverages – at times using bracket looks, at other times using his backers to buzz under on Green’s routes.

The double-coverage discipline was impressive. It was clear that Green was also stifled by a bigger set of outside corners. The length and physical play of Smith, Carr, and rookie Marlon Humphrey caused timing issues.

What Else Went Right

Pees also mixed up the pressures against Dalton. Mostly, he dialed up A-gap bluff/blitz action in third-down passing situations to keep the quarterback and his line guessing. On Lardarius Webb’s tipped interception, the inside backers bluffed a double-barrel A-gap blitz while the defensive backs came on an overload perimeter blitz.

The best adjustment Pees made came when the Bengals opened up their spread formation and hurried the pace on their best offensive drive of the game. After Kamalei Correa struggled to defend the run and was out of position in coverage on that drive, Pees went to Patrick Onwausor to settle things down.

Overall, the rotation between Correa, Onwausor, and Anthony Levine played a big part in taking away the Cincinnati crossing routes and increasing the sideline-to-sideline speed to pursue edge plays. Pees did a nice job of mixing and matching with all three players.

On offense, coordinator Marty Mornhinweg mostly called a conservative game, sticking to base and two-tight looks. It’s clear that without a true fullback, Nick Boyle (who was consistently in motion and lined up often on the wings to provide added pass protection) and Maxx Williams will serve the hybrid H-Back/TE roles.

The run game featured some wrinkles, including misdirection pitches and toss sweeps. Misdirection is a staple of any Greg Roman rush attack.

Although they didn’t always hit, the overall perimeter run game was blocked and timed well.

Although the defense recovered on that fast-paced, red zone penetration that ended on a C.J. Mosley pick, the struggle was real on that drive. The Ravens were caught in their nickel package and had trouble getting lined up. Other teams will try to employ the same strategy to get the defense out of their exotic packages and force them to play with a bigger personnel package on the field. Pees needs to have his dime package ready to roll when they do.

Offensively, there were a lot of empty looks in third-and-obvious passing situations. Initially, the Ravens had success creating mismatches from these formations using Danny Woodhead in the slot against the Cincinnati backers. Once he went down, they kept going to those empty looks, exposing the offensive line and Joe Flacco.

The Bengals didn’t blitz much, and when they did bring the house to expose their coverage, Flacco burned them on the Jeremy Maclin catch-and-run TD. But going empty consistently on third-and-obvious is a tough way for the offense to sustain drives going forward.

When the Ravens do spread things out, they need to weave in more stacks and pick route combinations to get their receivers free. We saw how effective the pick play can be on the Maclin TD. On that play, Maclin worked under a Ben Watson clear-out.