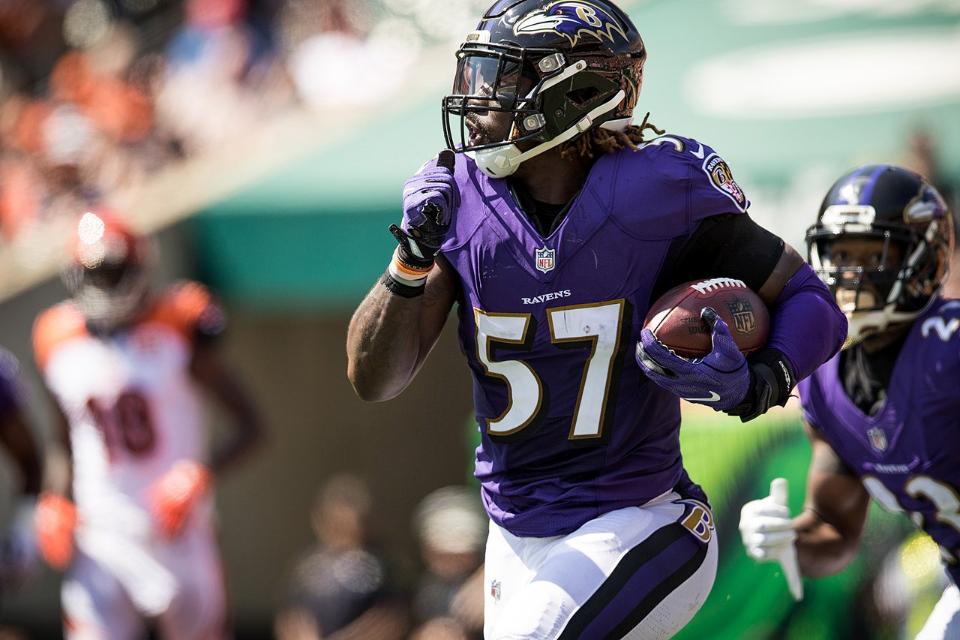 Please allow me to first apologize for the tardiness of this in-season weekly piece. I was out in San Diego paying my respects to my uncle Vince Lombardi, Jr., who recently passed. He served in the Marine Corps for 30 years and the ceremony to honor his memory was extremely moving and heartfelt. It made me even more proud of the flag that symbolizes our nation, celebrates our freedom.

I did however have an opportunity to watch the game at a place called Dirty Birds. It was great to see so many Ravens fans rally together, so many miles from home. If you are ever in the Pacific Beach area of San Diego during football season, by all means, check out Dirty Birds.

On to the game…

I’ve been critical of Joe Flacco for not making pre-snap adjustments based upon what he sees from a defensive formation. On Sunday, he made one critical pre-snap adjustment that produced a TD when he hit Jeremy Maclin on a crosser, off the heels of a perfectly executed rub from TE Ben Watson…Given the Bengals defensive strategy to key in on the run, particularly late in the game, Terrance West (19 carries for 81 yards) and Buck Allen (21 carries 70 yards) deserve credit for grinding out 151 yards of clock eating offense. West was particularly adept at producing yards after contact and if not for a holding call from Ryan Jensen, he would have bumped his total up over 90 yards…The offensive line was physical in the trenches when running the ball. Pass protection was a different story as. More later. 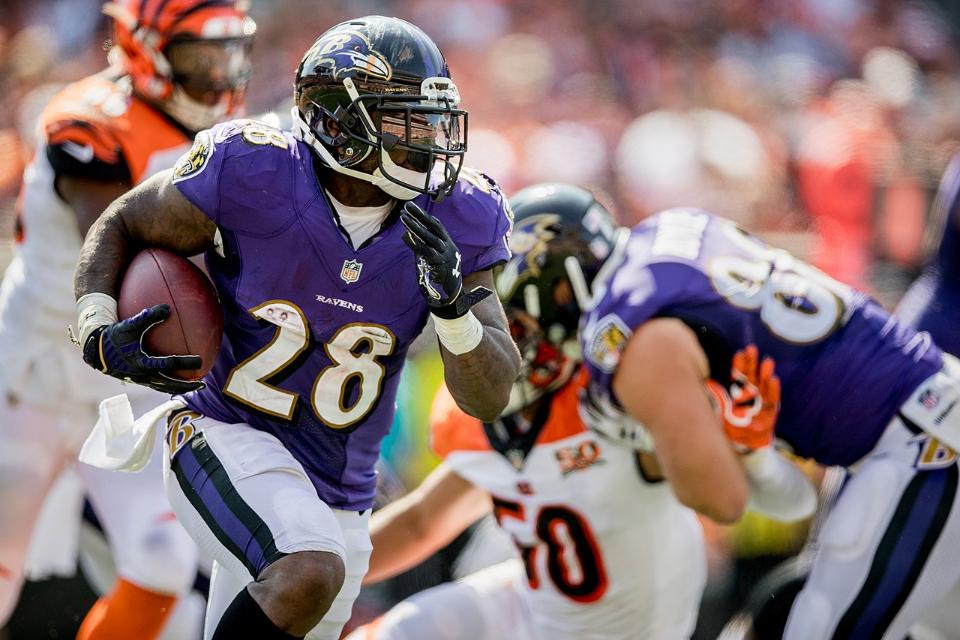 The defensive front seven was extremely effective, with the standouts being Brandon Williams, Michael Pierce, Terrell Suggs and C.J. Mosley. Williams and Pierce helped to collapse the pocket, enabling the edge rushers to get home without blitzing while regularly harassing Andy Dalton. That allowed Dean Pees to open up his playbook…Matt Judon provided a push off the edge, while Za’Darius Smith was equally effective prior to leaving the game in the second quarter with a leg injury…Jimmy Smith was the best among the corners, employing effective press coverage while Marlon Humphrey flashed, although his sample size was small…Tony Jefferson was active and around the ball but the communication breakdown between he and Brandon Carr could have changed the game’s outcome when WR Cody Core broke free down the right sideline and was wide open before Dalton over shot his receiver on a third and 9 from the Bengals 41 at the 5:52 mark of the second quarter with the Ravens leading 3-0…Two-way player Pat Rickard was an effective blocker in limited snaps offensively, while penetrating effectively as an interior defender. His first NFL tackle was a memorable one, knifing in to drop fellow rookie Joe Mixon for a 5-yard loss during the game’s waning moments…Sam Koch bailed out Morgan Cox on a couple of errant snaps.

Ronnie Stanley looked like a player who has missed a lot of practice time. Ditto for Austin Howard. Both struggled in pass protection. James Hurst was, well, he was James Hurst in pass pro…Let’s cut Flacco some slack for delivering the ball late to Breshad Perriman and another time to West resulting in an interception. This was his first real action of 2017. But those delay of game penalties were just flat out ridiculous for a 10-year veteran. Does he need a bigger play clock? …The red zone offense was poorly executed and lacked imaginative design. Let’s not forget that the Bengals defense was missing its best player (Vontaze Burfict) plus starting safety Shawn Williams and cornerback Pacman Jones. The Ravens did little to try and challenge their replacements…Perriman is still raw in his third season. You have to wonder if he’s simply a creature of bad habits or just not that coachable. Or is it the coaching?

Kamalei Correa can make plays when he’s asked to recognize and pursue in space. But at the point of attack inside the tackles, he is consistently lost in the wash. Patrick Onwuasor is more effective inside the tackles but in space he looked a bit clumsy, although his PD paved the way to Brandon Carr’s INT. The pair of ILB’s will represent a challenge for Dean Pees. They aren’t complementary backers who can be deployed based on down and distance. Their collective failures could force a lot more dime formations from Pees…Eric Weddle had a very pedestrian game for someone of his ilk. By the way, why weren’t the Ravens bracketing A.J. Green with Smith and Weddle? … Inside the red zone, Pees opted to rush just 3 when faced with a 2nd and 8 at the Bengals 12 with 11:37 left in the third quarter. Why does anyone rush just 3 in the red zone? EVER?

The Ravens were penalized 11 times for 85 yards and the offensive line was the biggest culprit. That needs to be cleaned up, particularly when facing more accomplished opponents. But don’t hold your breath. The Ravens have had the 4th and 6th most yellow laundry thrown their way in the NFL over the past two seasons…More costly injuries, this time to Danny Woodhead and Za’Darius Smith. 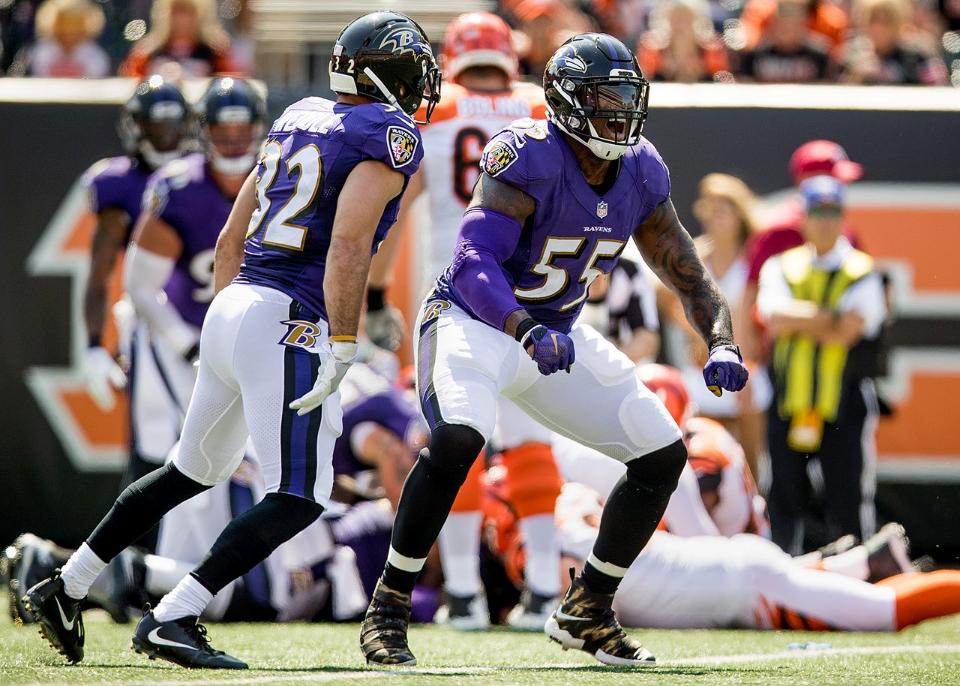 It isn’t often that I name co-recipients of the MFA but this week, I have no choice.

Terrell Suggs looks to have a direct tap line into the fountain of youth. He had six tackles and two sacks to go with two key passes defensed – one leading to an interception and another which stopped a Bengals drive when he sniffed out a flanker screen. He doesn’t get enough credit for being such a heady player. His recognition skills are outstanding.

Sharing the award with Sizzle is C.J. Mosley. Despite the lack of an effective sidekick when defending the run, Mosley was a force against the run and his interception in the end zone in the second quarter with the Ravens holding a 3-0 lead was the single-most important play in the game.

Some stats on recently departed Ravens: