Picking Up Stunts and Twists

Last week, the Ravens faced a Cincinnati defense that blitzed on 19% of their defensive snaps, staying true to their tendency to blitz less often and rely on their front to generate pressure. The Baltimore offensive line did a nice job of handling that Cincinnati front despite being in poor down and distance scenarios, and running a lot of empty looks in which there was no extra blockers to help the front five.

In the few times when the Bengals blitzed the empty look, it was hit or miss. They were able to get home and cause Joe Flacco to hurry an errant throw to Danny Woodhead in the red zone, but they were burned badly on the Jeremy Maclin TD in which they showed Cover 0.

In contrast, Cleveland defensive coordinator Gregg Williams will get after it and dial up an assortment of exotic blitzes. He’ll use his backers to crash through the A gaps. And he’ll employ a steady diet of interior stunts and twists to create openings for his pass rushers.

Stunts and twist are more likely to be in play when the Baltimore offensive line slides left or right (away from the stunters) to account for an overload from either the strongside or weakside of the formation. The Browns showed an assortment of overloads against Pittsburgh in obvious passing downs. Stunts also have a higher probability of occurring when the defense shows a double-barrel A-gap blitz look.

The offensive line will need to be in coordination and stay disciplined with their gap assignments when they handle those line games. The Ravens will see more overloads if they continue to operate from empty formations.

Along with all the pressures that Williams will bring, he’ll also disguise and drop defenders into zone coverage, especially when the Browns are in favorable third-down situations. Offenses will account for those extra rushers and try to hit the passing windows the rushers presumably will vacate off a quick step drop, only for those rushers to flood the inside passing lanes and take away quick crossers and in-cutting routes.

Depending on the third-down situation (even in third-and-five and longer), offensive coordinator Marty Mornhinweg should dial up draws and delays to catch the Browns’ bluffs and gash the soft box. We saw in Week 1 how effective these delays can be both from a timing and design standpoint. Buck Allen was especially effective on a key third-down conversion from an open shotgun set, waiting for two pullers to get out in front on a delayed counter.

In general, when the safeties play back, Flacco should be ready to audible to the run, especially when they’re in the gun.

Between the misdirection pitch plays, and the well-designed counters and sweeps, Greg Roman’s fingerprints were all over last week’s run-game design. But it wasn’t just the plays he dialed up. It was also the use of different personnel groupings. Specifically, when the Ravens were in heavier base packages (one-wide looks or two-tight), they would use their tight ends as lead blockers. Nick Boyle was heavily involved on misdirection blocking plays. On one play, Boyle and Maxx Williams lined up as fullbacks, showing a full-house backfield look.

Not only are Boyle and Williams natural pullers to lead block on perimeter runs, they can run routes from the backfield and slow down the Browns’ edge pressure. There is a logical opportunity for the Ravens to bake-in some chip blocks and releases for Williams and Boyle to get out in space and gain yards out of the backfield. 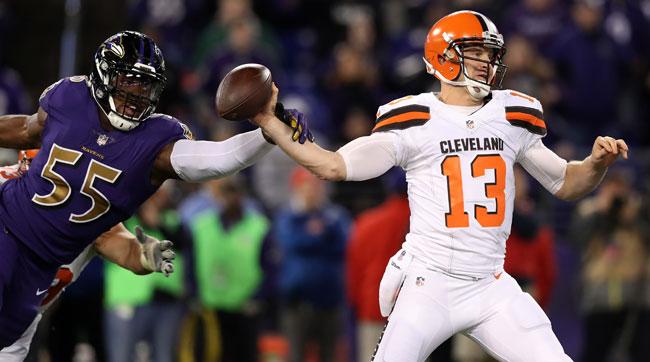 The stage is set for defensive coordinator Dean Pees to give rookie quarterback DeShone Kizer an education on pre-snap reads. Pees already showed a bevy of looks last week against a seasoned Andy Dalton, using his rushers in standup positions perched over the A gaps. More times than not, the Ravens didn’t actually bring those extra rushers, but the threat of the inside blitz often led to the Cincinnati interior linemen making the wrong blocking commitments. In fact, Pees mixed in stunts off these bluff blitzes which worked nicely (you don’t see many stunts from Pees).

The same bluff action should be in play against the talented rookie. But Pees should mix up his blitz looks from the weakside and strongside as well, showing the overload from either side, only to come from the opposite direction.

On the back end, it’ll be just as critical that the safeties walk up to the line and show blitz in the pre-snap phase, only to drop into coverage after the ball is snapped.

Post-snap bluff action will have a two-fold effect on Kizer. One, the rookie has already shown a tendency to hold the ball too long (taking seven sacks against Pittsburgh), and he’ll continue that trend if he’s forced to account for defenders in coverage he didn’t expect. Two, the bluffs will also challenge Kizer to make the right pass protection adjustments. If he slides his line to the wrong side, the Ravens will unlock free rushers.

For the most part, the Bengals couldn’t move the ball against the Baltimore defense. But when they put together their best offensive drive of the game and marched down the field against the Ravens in the second quarter, it was due to their hurry-up spread attack. The Bengals had Baltimore on their heels, with their best play coming from a shotgun run against the nickel package. For whatever reason, the Bengals didn’t go back to their quick game.

There’s no doubt that Hue Jackson saw that tape and will have his offense ready to run an up-tempo style, even with a rookie quarterback, and even if it means only catching the Ravens off guard on selective drives.

If the Browns go to a three or four-wide set, the Ravens run defense will need to hold up when they’re in their nickel, 4-2-5 packages. Against the Steelers, the Browns used Duke Johnson in tandem with Isaiah Crowell, keeping Crowell in the backfield. Using the dime against this personnel grouping will leave the Baltimore defense vulnerable.

When the Ravens are in nickel though, they need to keep Brandon Williams or Michael Pierce on the field to have better protection up front against the run.

Speaking of Johnson, boy is he a matchup problem. From a coverage standpoint, he can’t be viewed as a tailback at all. Johnson caught 61 passes in 2015 and 53 passes in 2016 – he’s a receiver who happens to also play running back.

Jackson gets Johnson in some favorable matchup opportunities. Johnson will flex out wide, run wheel routes, and even run deep verticals. Any defense that faces Johnson when the Browns show spread must account for him as a pure route runner who won’t even start out in the backfield. Johnson should be checked by a defensive back when he’s lined up as a receiver.

Was there any doubt this would be the marquee matchup of this game? These are two future Hall-of-Famers (yes, Suggs is a Hall-of-Famer) who are still playing at the highest level. Thomas is a craftsman pass blocker. He understands how to establish leverage and the right blocking angles better than anyone on the blindside. Meanwhile, Suggs also possesses the technique and high football IQ to get the best of his foes. This will also be a pivotal matchup in the run game.