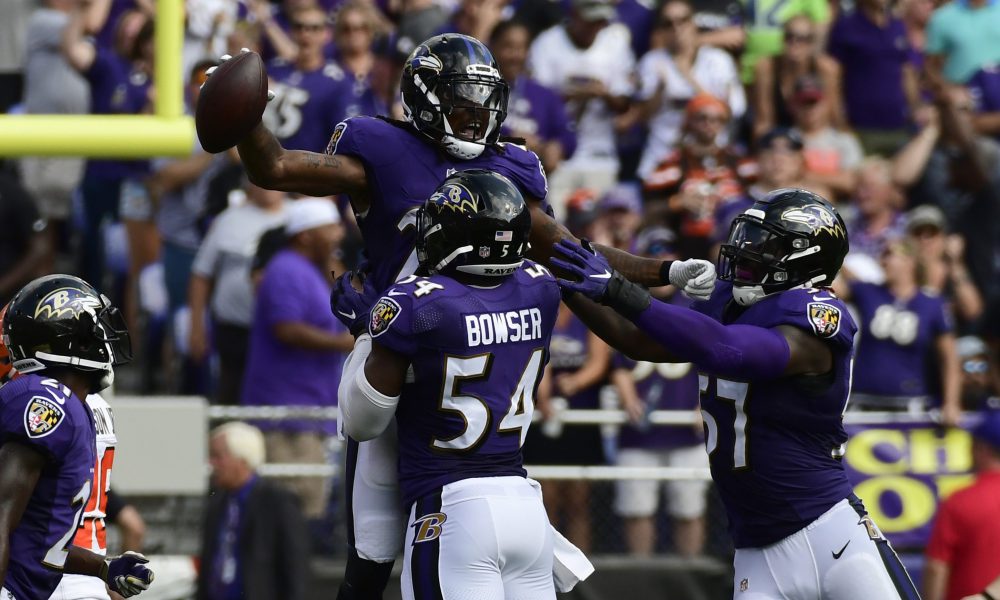 One game at a time.

It’s a marathon, not a sprint.

Get better every day, every play.

The win is the only stat that counts.

All of these are tried, true and oft-repeated clichés that you’ll hear from players, coaches and front office personnel during the course of a season. And while each clearly resonates for most football teams, they really ring true for the 2017 Baltimore Ravens.

Unfortunately, another common cliché in the NFL is “Next Man Up”, and for the last three seasons, Ravens injuries have piled up at an uncommon rate and they now have 15 players on Injured Reserve just two games into the season. The Ravens depth is already being tested. Yesterday they lost Marshal Yanda and Bam Bradley for the season and injuries to Brandon Williams, Maxx Williams and Terrance West are likely to cost each of those players some time next Sunday when the Ravens battle the Jaguars in London’s Wembley Stadium.

Of course, the Jaguars have their own struggles and it would not be surprising to see the Ravens host their arch-rival Steelers on October 1st with a (3-0) record. From there, John Harbaugh’s club could go (7-6) and probably make their way into the postseason. But these mounting injuries are a major concern.

Joe Flacco was off the mark and late with his throws in the season opener but against the Browns he was sharp, completing 25 of 34 passes for 217 yards, 2 scores and a passer rating of 97.3. If he gets on the same page with receivers Mike Wallace and Breshad Perriman, maybe those numbers improve. His two scoring strikes were lasers to Buck Allen and Jeremy Maclin. Flacco even used cadence as a weapon late in the game. Let’s hope that it’s a start of something new for the Ravens signal caller. Let’s also hope that he allows plays to develop a bit longer when he has time. He gave up on a couple yesterday…Back to Allen, the reserve running back chipped in with 101 yards from scrimmage, while hauling in the touchdown pass and rushing 16 times for 66 yards (4.7 ypc) despite a defense hell bent on forcing Joe Flacco to throw… 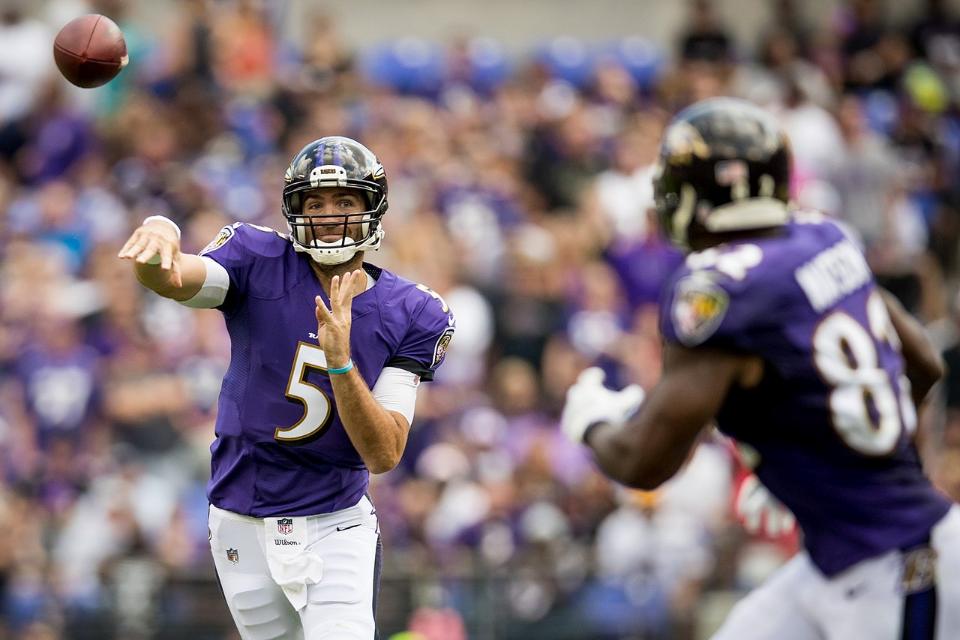 Alex Collins was effective during his 8 snaps, running it 7 times for 42 yards, looking much like a Steven Jackson clone. The Ravens defense helped bail him out after he fumbled at the Cleveland 47 with 6:49 left in the game…Terrance West showed terrific patience and vision on his 4-yard TD run…The Ravens have polished off their execution of screen plays, particularly to the tight ends. Maxx Williams was determined with the football adding some rugged yards after catch. These screens could be particularly effective down the road once the Ravens get their vertical passing game ironed out…Ben Watson looked terrific in space and nearly broke off a long TD. He had a few catches in clutch situations and finished with 8 catches for 91 yards…T Austin Howard has his best game as a Raven.

Michael Pierce helped pick up the slack for Brandon Williams who left the game with a foot injury. Like Williams, Pierce combines strength and uncommon athleticism for a behemoth defender. It’s amazing that he slipped through the draft undetected in 2016…Terrell Suggs was menacing and while he only had 1 registered tackle, it was a key sack that set the game’s tone, resulting in a fumble and Ravens recovery. He also had 4 other QB hurries that disrupted DeShone Kizer’s rhythm and effectiveness downfield…Matt Judon’s motor is impressive. He relentlessly chased down a couple of plays driven purely by desire…Tyus Bowser provided a strong push off the edge, registering his first career sack. Plus, he showed his athleticism on his first career interception and was one step away from his first career pick six. He’s earning more playing time…Tim Williams showed that he’s ready for a bigger role on passing downs while blowing the doors off All-Pro tackle Joe Thomas on one play, resulting in a QB hurry and incomplete pass. 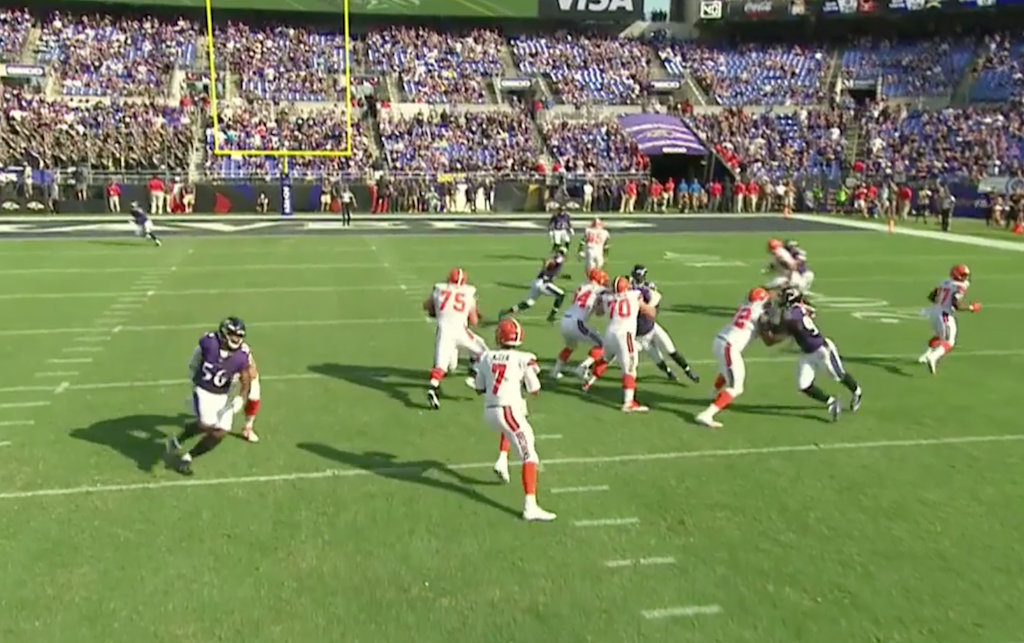 Lardarius Webb continues to demonstrate outstanding technique as a tackler. It’s obvious that he’s growing more and more comfortable in his role and he continues to make key plays, including his interception in the end zone…Eric Weddle’s interception was very Ed Reed-esque. He quickly diagnosed the play and was in position to defend it, completing the effort with an acrobatic pick…Tony Jefferson was effective when attacking near the line of scrimmage…Nice of the Browns to use a timeout at the end of the first half to avoid a 10-second run off following a false start at the 0:29 mark. The Ravens scored on a play with 5 seconds left to extend their lead to 21-7. Thanks Hue!

Breshad Perriman looks clueless. He was shutout after being targeted four times, dropping two passes…Ronnie Stanley had his doors blown off by Carl Nassib during one first-down play resulting in a loss of 2 for Buck Allen.

Dean Pees failed to dial up any pressure packages to confuse the young Browns QBs…The Ravens had some busted coverages and could have been burned in a big way by an accomplished QB/WR tandem like the one they’ll face against the Steelers. Tony Jefferson was a culprit at least twice, failing to roll over in coverage. Once he was late to the party when the Browns faced a third and 18 from their own 17. Kizer hit second-year receiver Rashad Higgins on a 35 yard pass along the right hash mark. Higgins had 7 catches for 95 yards. His career numbers prior to the game included 6 total catches for 77 yards. Jefferson was late a second time in support of Brandon Carr when David Njoku was released by Carr to Jefferson. It ended with a 23-yard scoring strike, the Browns only TD of the game…The coverage on Seth DeValve’s 49-yard reception from Kevin Hogan in the second quarter was a mess.

The officiating was inconsistent. Jeremy Maclin was obviously interfered with by Jason McCourty at the 3:41 mark of the second quarter when the Ravens faced a second and 9. Later Jimmy Smith was flagged for hands-to-the-face that negated a sack by C.J. Mosley. We’re still waiting to see that penalty…I’m guessing the official time keeper is polishing up his/her resume today. The delay in play when Cleveland punter Britton Colquitt had to wait a couple of minutes to punt from his own end zone while referee Gene Steratore asked for a clock reset to 1:53 in the second quarter was ridiculous.

The injuries continue to mount. Marshal Yanda does his job better than any other Raven does theirs and he’s now lost for the season with a broken ankle. Bam Bradley blew out his knee while Maxx Williams, Brandon Williams, Terrance West and Ryan Jensen all sustained injuries that could force them to miss the next game against the Jaguars in London. 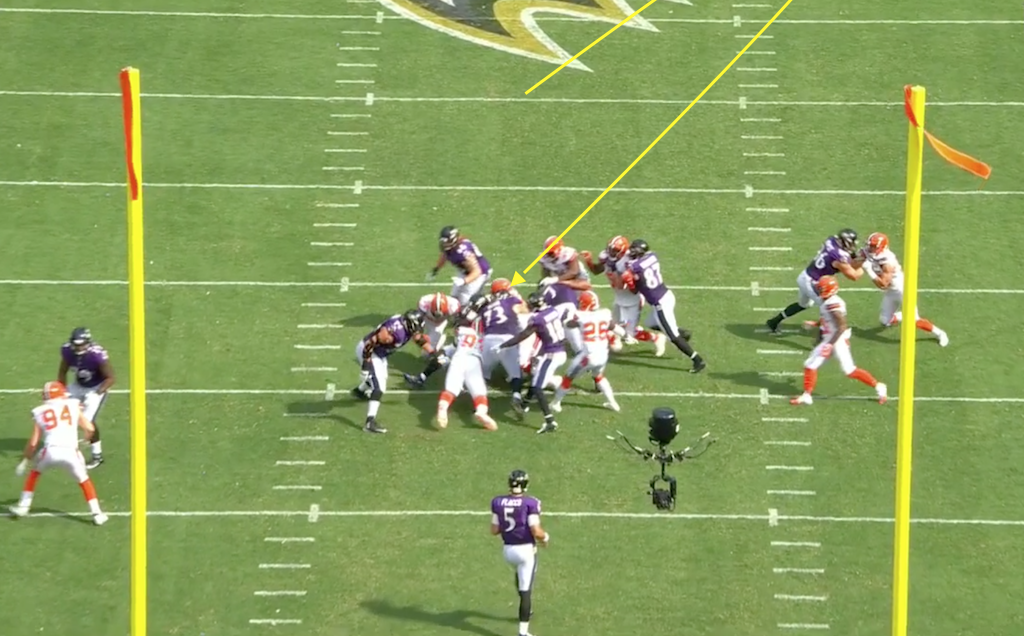 He was targeted often but almost always had an answer save for the Njoku TD when Jefferson was late in support. He used the sidelines adeptly as an ally in coverage; he was credited with four passes defensed and he added an interception. His physical play at corner is an ideal match for the Ravens defense given the way the front seven is disrupting the quarterback. What a great home debut for one of the newest Ravens, Brandon Carr.

Who was Player of the Game (aka The Megan Fox) during the Ravens 24-10 win over the Browns?

One game at a time.