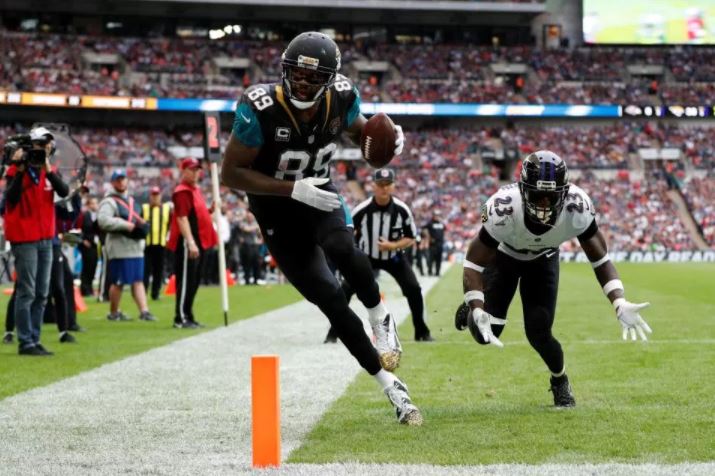 You could argue the move that influenced the outcome was the lack of preparation across the entire coaching staff prior to setting foot in London, and not arriving there much earlier (but that’s another story that I’m sure my colleagues will touch on).

Tactically, this game largely comes down to evaluating Blake Bortles’ performance. Bortles wasn’t Bortles at all. Maybe he needed the support from the Jaguar fans across the pond. But really, maybe all he needed was to face Dean Pees’ defense.

Now, give a lot of credit to Jacksonville offensive coordinator Nathaniel Hackett, who devised a terrific game plan that kept the Baltimore defense on its heels early and often. The Jaguars ran pre-snap shifts and misdirection to get the Baltimore defenders out of position, he sprinkled in screens to expose the lack of open-field instincts of the linebackers, and most importantly, he gave Bortles easy completions on first down. He kept Bortles in a comfortable position.

But Pees’ passive and predictable game plan certainly made things comfortable, too. He once again relied on his straight four-man rush to apply pressure on Bortles, with a smattering of stunts and twists. It’s almost as if the second Brandon Carr gave up a long completion down the right sideline against Marqise Lee, Pees went into a shell with his play-calling and elected not to challenge Bortles with any combination of bluff or blitz action.

Jacksonville didn’t give up a sniff of pressure, let alone a sack. When Pees showed the blitz too early on a key 3rd-and-11 play, Bortles easily slid his protection to pick it up. The Weddle blitz in which Bortles was able to escape and buy time to extend the play was laughably executed. The blitz was declared way too early, and there was no deception as to where the blitz was coming from.

I understand the players didn’t execute either. Weddle deserves his share of blame for the play for tipping it too soon and not finishing the tackle. But where was all the pre-snap movement Pees showed in the preseason? At the minimum, he would have his defenders crowd the line, sometimes stressing the A gaps, sometimes stressing the edges with overload looks. He often brought his backers on cross blitzes and the corners were held responsible for locking things down in one-on-one coverage on the back end.

Considering the investment that’s been made in this secondary, it seemed logical that the rush would be freed up to take more chances. The defensive coaching staff talked about playing that style of defense. So far, it’s been a lot of hot air, and more of the same “hold on for dear life” defense we’ve seen year after year.

There’s nothing wrong with relying more on your front to win their individual matchups to apply pressure on the QB. But when they can’t get it done, you have to try something different. At least give more playing time to the one guy who was getting any pressure at all (Tim Williams) and stop dropping one of your most effective rushers (Matt Judon) into coverage.

To this point, the schemes have been just as tired as the rhetoric that this defense will be aggressive.

The only thing that went right was on the offensive side of the ball, and that had more to do with Alex Collins’ performance than anything else. Can’t really point to scheme as the positive here, he just ran hard and has shown the extra burst to turn the corner. The coaching staff needs to get him more opportunities on counters, traps, and sweep action.

There’s a laundry list, and the defense has been hit hard already. Let’s switch to the offense.

Offensive coordinator Marty Mornhinweg could learn something from Hackett and mix in more screens to give the offense better early-down efficiency. Or how about some run/pass option plays? I watched plenty of football on Sunday to drown out the awfulness of London, and the rest of the league is all over the run/pass option play (or as Tony Romo calls them, RPOs). Green Bay, Cincinnati, Pittsburgh, Washington. They all have those option plays built into their offense.

When the Ravens receivers face any level of off coverage, there has been no attempt by Joe Flacco to get them the ball quickly to let them make moves in space. Now, I know what you’re going to say – Jacksonville corners Jalen Ramsey and A.J. Bouye pressed the receivers all day so those plays wouldn’t have worked anyway. It’s a fair point.

But this has been an issue forever. And there is a way to use stacks and motion to free the receivers up. This is a static offense though that shows too many balanced looks.

The receivers aren’t given help to get a clean release.

The strength and talent of this offense is its three receivers. You must figure out a way for them to get the ball, whether it’s in space or downfield. Right now, the Ravens haven’t had anything resembling a downfield passing attack, and a lot of that blame goes to Flacco.

Defenses are sitting on their underneath routes, playing press, and daring the receivers to win, and this coaching staff isn’t doing anything to adjust.