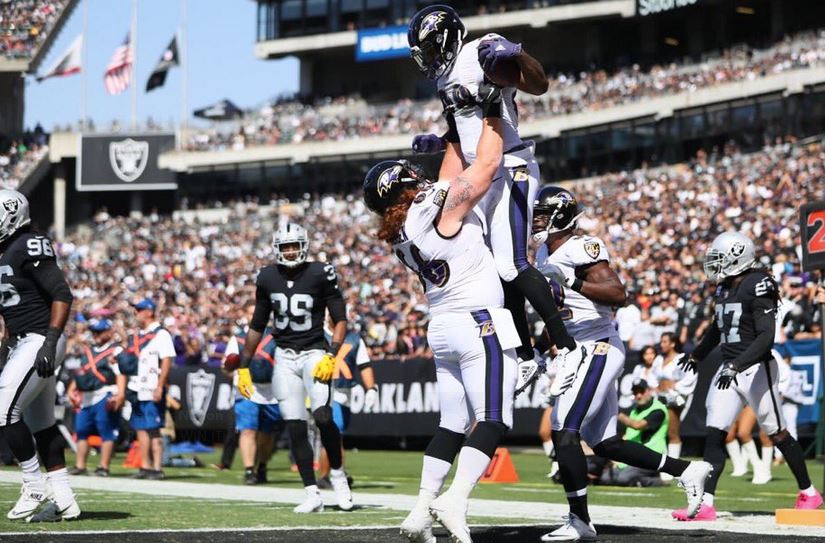 The Baltimore Ravens bounced back after two losses to defeat the Oakland Raiders 30-17 in Week 5. Russell Street Report staff react to the win here:

That’s the way this team is built to win right there: hit a big play or two and run the ball on offense, turn it over for scores and/or short fields, and play from ahead. When you don’t turn it over, don’t allow a sack, and commit just one penalty for five yards all day, it makes that formula a lot more viable.

I’m certainly not ready to declare that all is right in Ravens Town, but that was a heck of a bounce-back win.

Of course, nothing good can come without injury in Baltimore, so we’ll wait anxiously to hear the status of Terrance West, Matt Skura, and Carl Davis.

— It might have been a season-saving win by the Ravens. The team has a stretch a games where it can improve to 5-2.

— No turnovers by the offense, usually equals wins. Joe Flacco looked the more comfortable in the pocket than he has in the past three seasons.

— Injuries continue to be a problem, but the Ravens will enjoy this one.

— The offensive line had its best game.

Well, that was utterly unexpected.

Terrific job by the patchwork OL and great rebound game for the offense and Flacco. It was also nice to see the offense get going again after the coaches seemed happy putting the offense in park in the 3rd Q.

Overall, just what the doctor ordered and the Steelers were nice enough to drop a home game (and have to go to KC this week!) as Big Ben couldn’t seem to hit the side of a barn (and perhaps Jax isn’t as bad as we thought).

Bring on the Bears.

The offense showed up, the OL held up, the Flacco consecutive INT streak ended, the running game was given a shot and thrived, Alex Collins didn’t lose the ball, Joe finally hit some deep routes, and he wasn’t sacked in this game. NO TURNOVERS AND NO SACKS.

The defense bent, broke a few times, but made some fortuitous plays when they presented themselves. 3 sacks and a fumble recovery for a TD, then made some great plays late to seal the deal.

I want to complain about something. ANYTHING. I really can’t! All around solid effort!

Wait, Webby & Humphrey got torched a bit. There, that feels better.

The Ravens have deserved a lot of criticism over the last couple of weeks so let’s give them the credit they deserve today.

Both sides of the ball came out of the locker room with a serious sense of urgency that resulted in a quick 14-point lead. It would have been nice to see last week, but better late than never. The offense had balance and the defense gave up a few big plays but played a physical game for all four quarters.

The Ravens are catching some breaks with their schedule in the upcoming weeks. Let’s hope they can take advantage the way they did today.

Can’t say enough of the job the injury ravaged offensive line did in this game. They consistently opened up holes in the run game. Not quite imposing but enough to keep the offense on schedule. They also gave Joe Flacco adequate time to make a few plays in the pass game.

Pees was aggressive; here’s hoping that wasn’t merely a product of the opposing signal caller. The pressure, dime defense, Jefferson attacking and the use of Levine more consistently would all be welcome sights going forward.

Most of Baltimore has said it: run the ball and the rest will take care of itself. That’s what happened today. The Ravens gave each of their running backs a real chance to establish the run game, and they let Joe Flacco try to go downfield.

When you give each of those things a real attempt (not just one try), it opens up the offense all over the field.

Plus, give a lot of credit to a beat up offensive line. They kept Flacco upright, and opened some big holes for the running backs. Job well done guys! Enjoy the flight back east.